Ketamine has quickly risen to fame following the discovery of its antidepressant effects. Other compounds with similar pharmacology and classification have become of interest for their potential antidepressant effects as well, but their dissociative properties may lead to unwanted side effects.

New compounds tend to pop up on the black/grey market as designer drugs. Compounds that appear in these markets are considered New Psychoactive Compounds and are often reported to the United Nations Office of Drug Control and investigated for their effects to determine if they are a public health concern.1

One such compound, methoxetamine (MXE), is a hallucinogenic dissociative that is similar to phencyclidine (PCP) and ketamine.1 MXE appeared in the drug markets as early as 2011-2012,2 but since 2016 has been almost non-existent. Despite this decrease in prevalence, it has been a continued drug of interest by multiple research groups, most likely due to its close relation to PCP and ketamine. 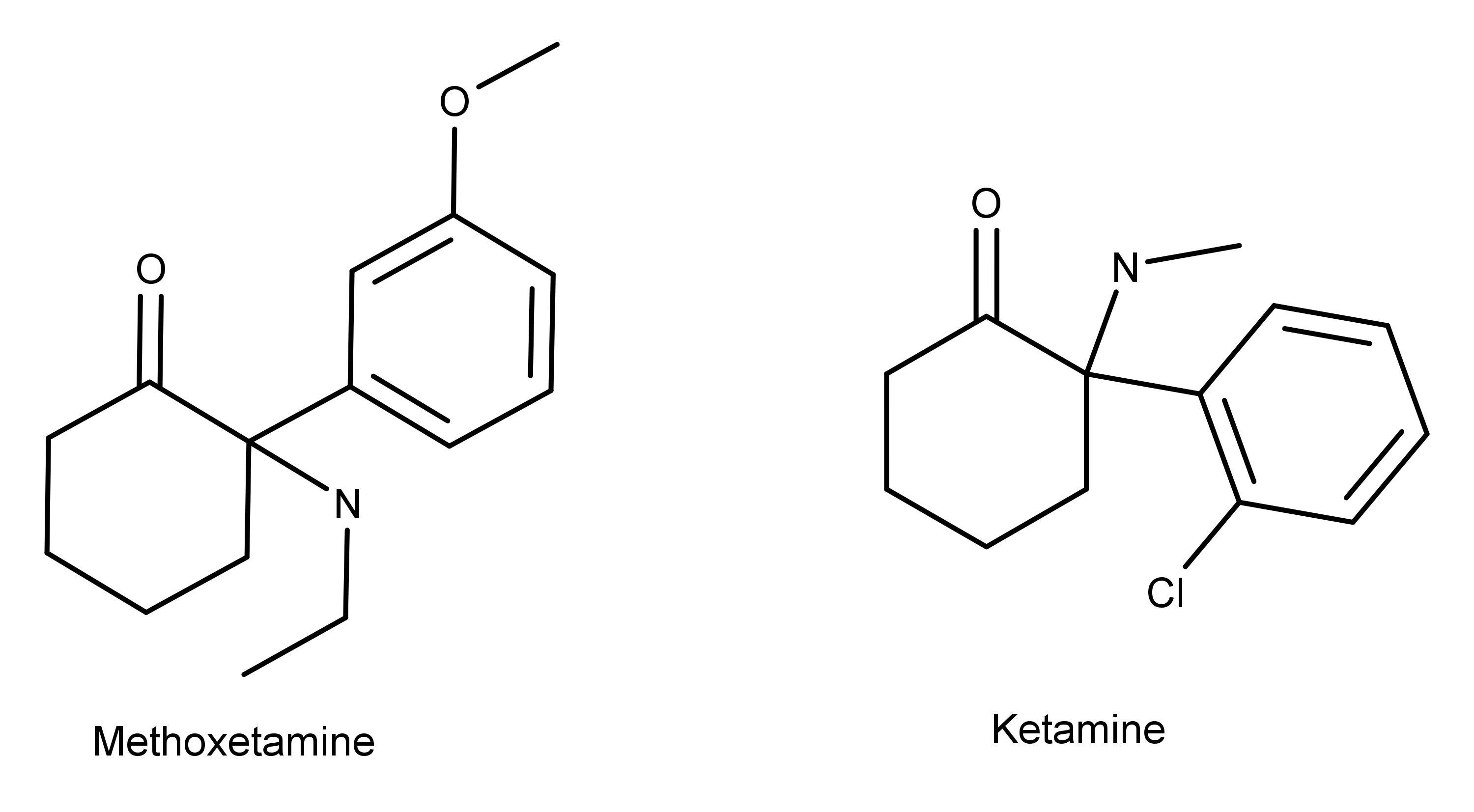 What is Methoxetamine, and What Does It Do In the Brain?

Classified as a hallucinogenic dissociative, MXE is part of the arylcyclohexylamine class and is structurally related to ketamine and analogs of PCP.2-4 In 2013, Dr. Bryan Roth et al, investigated the neurochemical profile of MXE and found that it binds to glutamate NMDA receptors with significant affinity, as well as the serotonin transporter, SERT, but with lower affinity.5 Glutamate controls the excitatory signaling in the brain, specifically in areas associated with learning and memory.

The major idea behind ketamine’s antidepressant effects is that by blocking activity at these NMDA receptors, it increases the activity at other receptors, increasing plasticity.6 The activity of MXE at the glutamate receptor is similar to that of ketamine. Serotonin is implicated in the pathophysiology of several mood disorders, and SERT is the main target of commonly prescribed antidepressant medication.4

Physiological and Psychological Effects of MXE

The effects of any substance can vary depending on dose, route of administration, and other factors. Generally, small doses of MXE produce euphoria, empathy, enhanced pleasant sensory experiences, dissociation or out of body experiences, hallucinations, and some antidepressant-like effects.1 Physiological effects can include dizziness, increased heart rate, nausea, vomiting, paranoia, difficulty speaking, and motor effects. Higher doses or prolonged use can cause more serious aversive side effects like cardiovascular problems, respiratory issues, memory loss, speech difficulty, kidney damage, and increased anxiety and depressive symptoms. MXE also has abuse potential due to the ability to acquire tolerance and dependence.1-3

Despite MXE being extremely rare to find through internet vendors since 2016, its existence has spiked interest in the research community. This is probably due to the finding of ketamine’s ability to produce rapid and long-lasting antidepressant effects in both humans and rodent models.6 Due to its structural and pharmacological similarity to ketamine, MXE been investigated for anti-depressive properties in rodent models.

Studies by multiple groups have shown that low doses of MXE produce rapid and sustained antidepressant effects in multiple behavioral experiments.5,7 These effects have been reported to be similar to ketamine, but both drugs still cause adverse side effects like dissociation. A study from 2017 found a dose-related effect of MXE on motor activity, anxiety, and depression-like behavior.8 One thing that sets MXE apart from ketamine is the action on the serotonin system. Since MXE binds to SERT, it may display properties similar to common pharmacotherapies to treat depression.

In 2019, one group investigated the potential anti-depressant effects of MXE and some of its analogs and their relation to ketamine.9 Overall, they found some antidepressant behavioral effects with these analogs and the authors believe the compounds are acting through a similar mechanism.

As of now, preclinical and clinical data are not sufficient to support MXE as an antidepressant, and further research is needed to elucidate the effects on the serotonin and glutamate systems, as well as potential adverse effects. What scientists understand right now is that methoxetamine and ketamine are both closely related in their neurochemical effects, but further understanding of MXE continues to remain elusive.