In the last decade, ketamine has received considerable research interest as a novel, rapid-acting antidepressant.1–5 Classically used as an anesthetic, it induces feelings of dissociation or disconnection between the mind, body, and outside world. This side effect is reported even at low sub-anesthetic doses. The neural mechanisms of how ketamine causes “out-of-body” experiences have remained elusive.

While monitoring the activity of cells throughout the brain of ketamine-treated mice, Vesuna et al. from Stanford University recently stumbled upon a specific neuronal rhythm deep in the cortex, which may hold the answer.6 The discovery reported in the journal Nature identified a new brain activity marker for dissociation in mice, and in a rare opportunity for scientists, also in a human. Their findings summarized below, shed more light on the neural mechanisms underlying the mysterious phenomenon of dissociation.

According to Vesuna et al., when administered to mice, the dissociative drugs ketamine and phencyclidine (PCP) caused a specific population of brain cells found in layer 5 of the retrosplenial cortex, to fire at a rate of 1-3 times each second (Figure 1). The unique rhythm, which began within 2 minutes of drug injection and lasted 45 minutes, coincided with the mice experiencing a “dissociative-like” state. 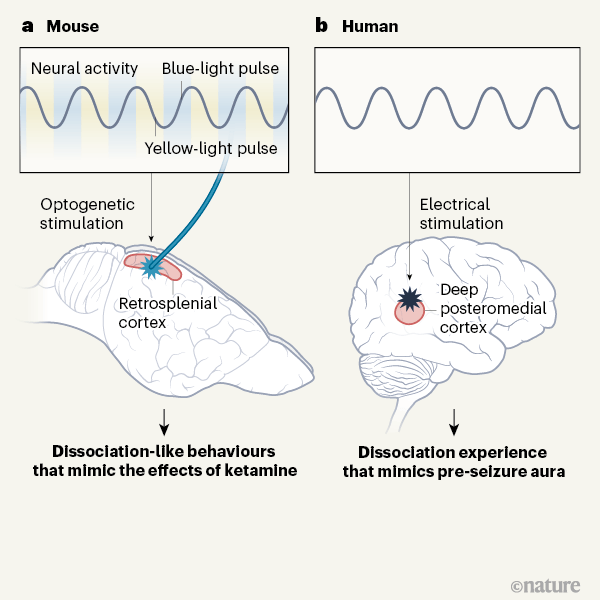 The animal dissociative-like behavior was characterized by a disconnect between the perception of incoming aversive sensations, which remained intact, and more complex emotional responses to the threat, which were blunted. Namely, mice still reflexively withdrew their paw from a heat source but failed to lick the paw to cool it off as they normally would (they’re registering the sensation but don’t care about it as much).

Importantly, the ketamine-induced firing pattern caused this cortical region, which normally communicates with the rest of the brain, to become disconnected. Since the retrosplenial cortex plays a role in cognition, navigation, and episodic memories, this could explain why such functions may go “offline” during dissociation.

Next, Vesuna et al. used optogenetics, a cutting-edge technique that shines light onto a brain area of interest to control its activity. Importantly, artificially producing this brain rhythm in drug-naïve mice elicited them to act as if they were under the influence of ketamine (Figure 1). Going one step further, the authors identified a key protein found in retrosplenial neurons, a “pacemaker” ion channel called HCN1, which plays a crucial role in setting this unique rhythm. Specifically, in mice lacking the HCN1 channel, ketamine failed to induce the key oscillation and elicit a dissociation-like state.

Brain activity in humans can often be measured with electroencephalography (EEG) using sensors placed on the scalp. However, this brain rhythm was located deep in the cortex, requiring more invasive techniques for investigation. Luckily, Vesuna et al. gained access to a unique human volunteer. The patient, who had a form of epilepsy that caused dissociation, had electrodes implanted in the brain (for diagnostic and treatment purposes), allowing for several exciting observations.

“I was listening to two parts of my brain speak to each other in a way that a third part of my brain, which I considered to be me, was able to listen.”

“What would it feel like if someone else were to come into your head?… What I considered me shrank to this other part of me where the other parts of my brain that were talking, I stopped considering them me.”

“…where is this 3D space am I?…I took a blanket…threw it over my body, just to see, because I knew that when I don’t feel it, I don’t consider it me and immediately my legs were no longer a part of me.”

Further, the electrical stimulation of this brain area caused immediate feelings of dissociation in the patient (Figure 1). Even though it represents a single clinical observation, this experiment replicated what was observed in the mouse brain. 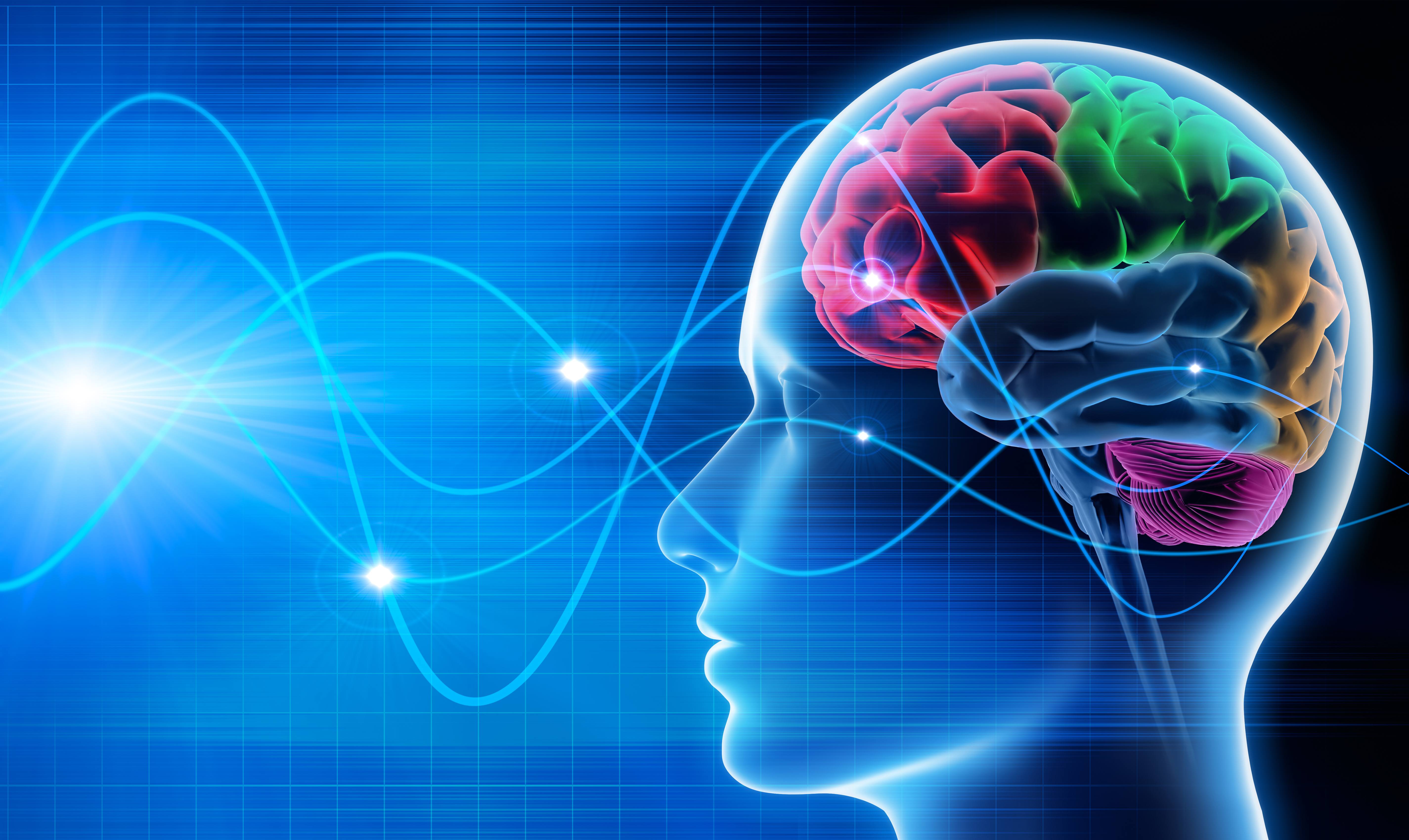 Putting These Findings Into Context: Brain Waves and the Retrospinal Cortex

Brain waves refer to rhythmic, synchronized patterns of neural activity. In humans, each of the dominant brain waves (from delta to gamma, 0.5-42Hz) is thought to correspond to a specific brain state (e.g., deep sleep, awake, deep thought, etc.). Such oscillations allow different regions to effectively communicate with each other, similar to tuning the radio frequency to increase the signal and reduce the noise.

Ketamine has been shown to cause global changes in cortical brain waves.7 In contrast, the dissociation oscillation identified by Vesuna et al. is localized to a very small cell population.6 In simple terms, while ketamine produces a whole symphony of effects in the brain, surprisingly, a single note played by a lesser-known instrument in the orchestra is enough to cause feelings of dissociation.

The retrosplenial cortex has been suggested to play a role in mediating the interaction between perception and memory, as well as in translating between self-centered and world-centered spatial information.8,9 While the exact functions of this brain region are still not well understood, it now appears crucial for keeping us tethered to reality.

The Clinical Significance of this New Study

Recent research has primarily focused on identifying the key brain mechanisms responsible for ketamine’s therapeutic actions. Understanding how this drug causes its dissociative effects may facilitate the development of a new generation of safer, more selective antidepressants. However, dissociation may not just be a side effect but an integral component of ketamine’s therapeutic action.10

Mammalian brains can temporarily decouple the mind and body, which may be an evolutionarily adaptive mechanism (e.g., during trauma). Ketamine not only hijacks this mechanism, but the level of dissociation reported predicts a more robust and sustained antidepressant response.10  It is not hard to imagine that being temporarily forced to dissociate from those rigid, negative, and maladaptive beliefs about oneself and the world would be beneficial for patients suffering from depression.

Whether the neural mechanisms identified by Vesuna et al. apply to the mind-altering/out-of-body effects of classical psychedelics (which act through a different brain receptor than ketamine) remains an open question.

Can I please put the before/after spike trains of ketamine administration causing cyclification into my book on consciousness? I’d even be willing to pay. 334.332.7799