The Chemistry of Ketamine

Ketamine was first synthesized in the 1960s by Dr. Calvin Stevens while working as a chemical consultant at Parke-Davis.1,2 Originally designated CI-581, the compound is a derivative of cyclohexanone and is used primarily as an anesthetic. It is a chiral molecule consisting of a racemic mixture of two enantiomers designated S (esketamine) and R (arketamine), the latter being less pharmacologically active.3

The Pharmacology of Ketamine

The mechanisms of action of ketamine are not well understood. However, one aspect of its pharmacology that scientists are gaining clarity on is that it blocks (antagonist) the NMDA (N-methyl-D-aspartate) receptors.4 This action likely plays a role in its antidepressant effects.

In 1997, Ebert et al. reported Ki values for the racemic mixture, (R)-ketamine, and (S)-ketamine as 0.53 µM, 1.40 µM, and 0.30 µM, respectively at the NMDA receptor.3 Subsequent studies have shown that (S)-ketamine has more potent and longer-lasting antidepressant effects than the other two forms (summarized in Yang et al. 2019). Therefore, the S enantiomer is the first choice for anesthetics and developing pharmaceuticals such as the antidepressant nasal spray Spravato.

The main finding reported in the Ebert et al. paper corroborated previous work suggesting that the primary ketamine metabolite known as norketamine is pharmacologically active and has analgesic effects. Scientists had long thought that the clinical effects of ketamine were due to the compound itself and the metabolite norketamine was inactive. This assumption was based on data from different routes of administration.

The Evert et al. paper describes how high levels of ketamine were detected in the blood after it was given intravenously or intramuscularly. At the same time, (S)-norketamine was present at lower concentrations but remains at a constant level, hence the assumption. However, when ketamine was administered orally, the first-pass metabolism in the liver destroyed most of it, resulting in lower levels in the blood. Yet, the data from previous researchers (see Ebert et al. for a summary) showed that the analgesic effects remained, suggesting norketamine may play a role in the analgesic effects. The authors concluded that “(S)-norketamine acts as a weak non-competitive NMDA receptor antagonist in the rat cortex and spinal cord.”

In a 2014 paper, Sleigh et al. summarized several cellular processes beyond the NMDA receptors that are affected by ketamine, including nicotinic acetylcholine ion channels and agonism of delta and mu-opioid receptors.5 The paper also details how ketamine has long-acting downstream effects on cellular processes, including gene expression and protein regulation. They summarize by saying, “Apart from its well-known NMDA blockade, ketamine disturbs a wide range of intracellular neuronal processes.”

Back in 2008, work by Maeng et al. suggested that activation of alpha-amino-3-hydroxy-5-methylisoxazole-4-propionic acid (AMPAR) receptors by ketamine may also have a role in its antidepressant effects.6  From this, Yang et al. proposed in a 2019 review that “It may be time to reconsider the hypothesis of NMDAR inhibition and the subsequent AMPAR activation in the antidepressant effects of ketamine”7 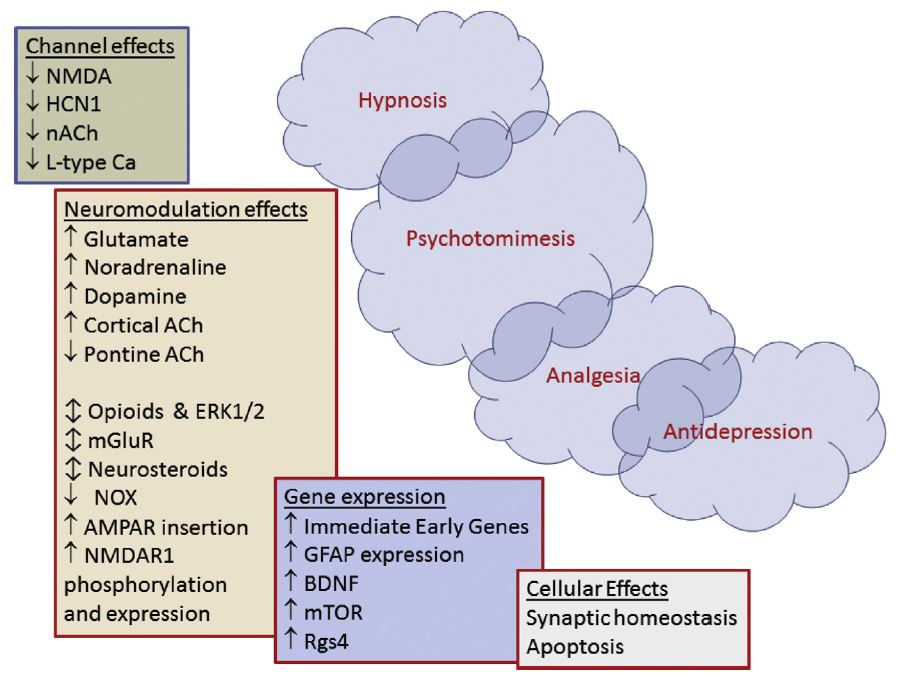 The Applications and Potential of Ketamine

From the results of a 2000 clinical trial, Berman et al. were the first to demonstrate that ketamine had antidepressant effects.8 Study participants received intravenous infusions of 0.5 mg/kg ketamine hydrochloride or saline as control over 40 minutes. The subjects who received ketamine quickly experienced significant improvement in their depressive symptoms. These patients had been suffering from treatment-resistant major depression and bipolar depression.

Research also suggests that ketamine may provide pain relief. A 2018 review by Bell and Kalso said, “There is good evidence that ketamine in the perioperative setting reduces pain scores and opioid requirements. Adverse effects are mild or absent, and perioperative ketamine may decrease postoperative nausea and vomiting. It seems most beneficial for surgery associated with high levels of postoperative pain.”9 The authors caution that there is limited evidence to support the use of ketamine for pain relief in palliative care, although “…a trial of low-dose ketamine, adjuvant to opioid (morphine), may be warranted in refractory cancer pain or pain in palliative care.”