Ketamine, an N-methyl-D-aspartate (NMDA) antagonist, can produce antidepressant effects more rapidly than current first-line treatments for depression.1 Ketamine is a racemic (50-50 mixture of the R and S isomers) drug known for its dissociative, anesthetic, and antidepressant effects.2 Ketamine’s novel mechanism of action, contrasting to that of typical SSRI’s, has driven its popularity in the field of psychiatry and clinical psychology. The drug has been clinically approved for treatment-resistant depression (TRD) and is being studied for the treatment of other mental illnesses.3

Ketamine acts as an antagonist at the NMDA receptor, a glutamatergic, ligand-gated ion channel.3 As a quick refresher, gamma-aminobutyric acid (GABA) is an inhibitory neurotransmitter that works to stabilize the levels of glutamate released in the brain. Glutamate is an excitatory neurotransmitter. Ketamine binds to the NMDA receptors found on GABA-eric interneurons and inhibits GABA release. By Inhibiting the release of GABA, more excitatory glutamate molecules become available in the cortex, via disinhibition, which may contribute to ketamine’s antidepressant effects.2 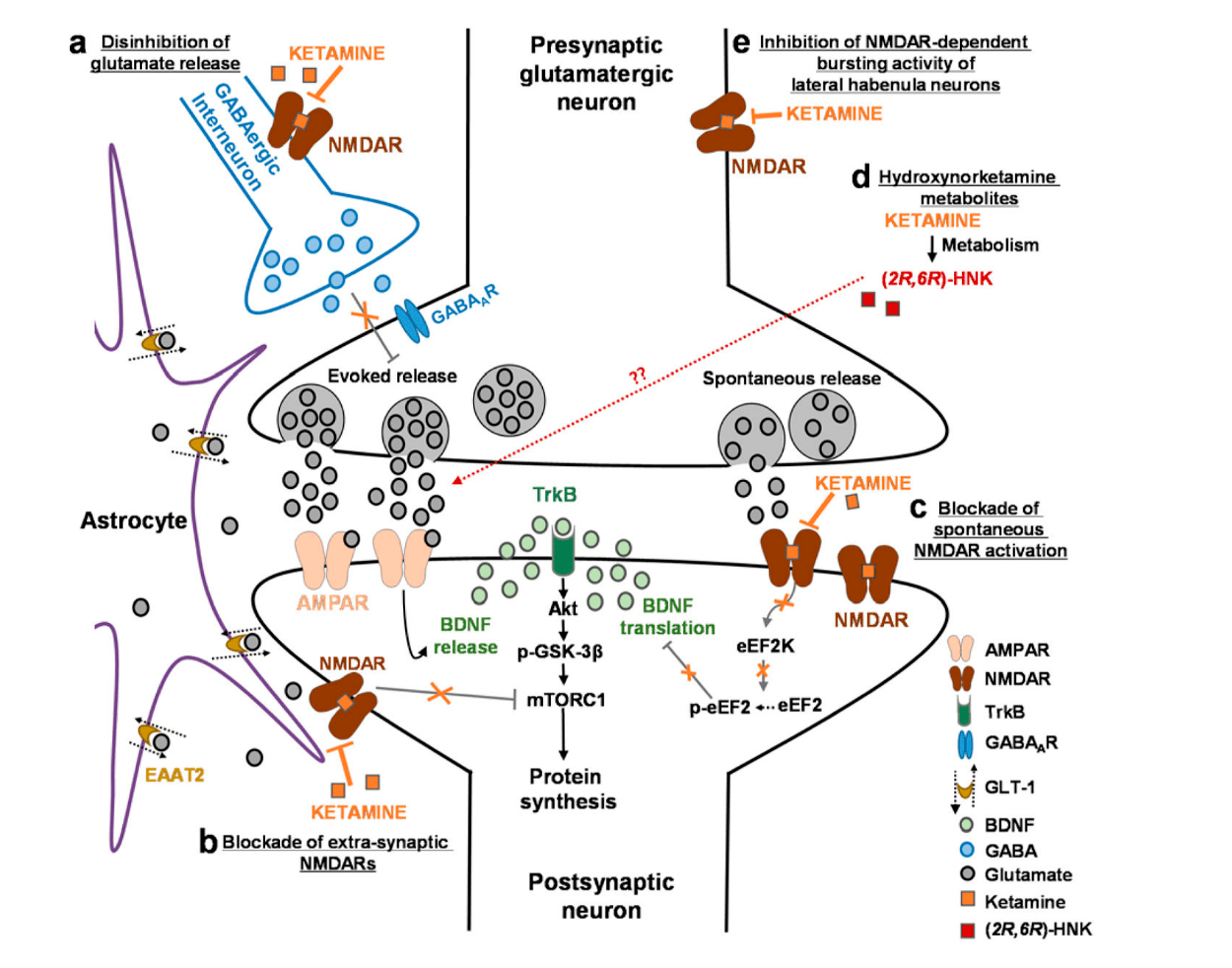 Figure 1: Ketamine’s proposed novel mechanisms of action as compiled by Zanos and Gould.3 Note that ketamine binds to NMDA receptors on GABAergic interneurons to disinhibit glutamate release (section ‘a’ in the upper left of the image). Evoked release of glutamate binds to AMPA receptors, in turn releasing BDNF. This figure also illustrates the proposed release of ketamine metabolites.

Researchers are discovering that ketamine’s antidepressant mechanism of action is not solely dependent on its activity at the NMDA site.3 Ketamine activates α-amino-3-hydroxy-5-methyl-4-isoxazole-propionic acid receptors (AMPARs) which are another major ionotropic, glutamate receptor (Figure 1). AMPARs are activated via glutamate release and subsequently induce the production of brain-derived neurotrophic factor (BDNF), a growth factor that possesses anti-depressant effects.

BDNF is also a factor in synaptic plasticity and its production can lead to resilience to chronic stress.3 The metabolites of ketamine also have antidepressant effects which are NMDA-independent. Ketamine’s metabolites (2R,6R)-HNK and (2S,6S)-HNK are released by the breakdown of ketamine and promote AMPAR-mediated synaptic potentiation.

Ketamine Can be Isolated Into ‘R’ and ‘S’ Isomers

The racemic (50-50) mixture of ketamine can be consumed via different routes of administration—orally, nasally, intravenously. However, racemic mixtures can also be filtered to isolate one isomer.

Isomers are molecular structures with the same chemical formula but with a different molecular geometry. Some isomers, known as structural isomers, have atoms that are connected in different ways (consider butane and isobutane). However, in the case of ketamine’s R and S isomers, the atoms are connected in the same structural way but differ in their spatial orientation. Isomers differing in spatial orientation but maintaining structural similarity are known as stereoisomers.3

While the R and S stereoisomers of ketamine look nearly identical, they are chiral molecules–meaning that they are non-superimposable mirror images (Figure 2).4 The preceding letters R and S are used to refer to the ‘handedness’ of the isomer. R indicates right-handed, or clockwise geometry, whereas S indicates left-handed, or counterclockwise geometry. Take for example human hands; when facing each-other they are mirror images. However, when rotated they cannot be indistinguishably placed over each other. Chiral molecules are also known in the field of chemistry as enantiomers. Though this difference between the enantiomers is seemingly small, each isomer of ketamine has unique neurochemical effects. 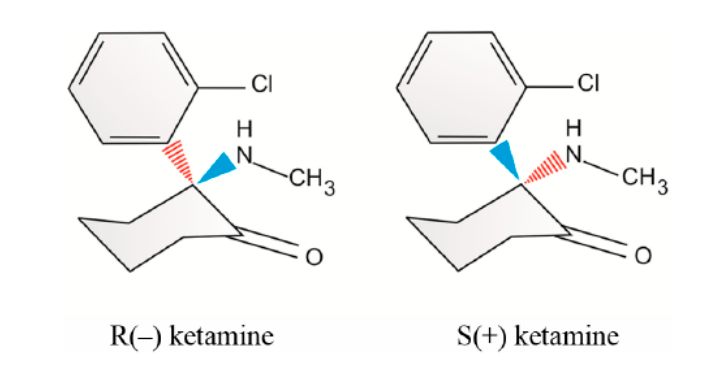 Figure 2: The optical isomers of ketamine.4

Clinical Differences Between the Effects of the R and S Isomers

Neither isomer has been studied extensively in human trials however, some research elucidates differences between them.

The S-isomer (also known as esketamine) is currently isolated and distributed for a higher cost than the racemic mixture.3 The isomer withstood a non-inferiority trial when compared to the racemic mixture, indicating equivalence between s-ketamine and racemic in treating depression.5 S-ketamine was FDA approved in 2019 for the treatment of TRD and is administered nasally as the drug Spravato.

Studies show that S-ketamine has a fourfold greater potency when it comes to inhibiting the NMDA receptor when compared to R-ketamine (also called arketamine).3 Its greater affinity at the NMDA receptor likely contributes to its selection by pharmaceutical companies in developing the drug. S-ketamine also has a greater analgesic potency; its analgesic potency is twice that of the racemate.5 For this reason, there is a preferential use of s-ketamine when it comes to anesthesia.3

Ketamine acts as an NMDA receptor antagonist to produce novel antidepressant effects with both R and S isomers as well as the racemic displaying comparable anti-depressant effects. While esketamine is currently being touted as the major clinical resource for TRD, it is important to call attention to the varying effects of isomers.

Most studies that suggest evidence of differences between the isomers have been conducted using mice. However, some results suggest similar findings in humans. Scientists continue to study the mechanisms and effects of the ketamine R and S isomers. Understanding the complete pharmacology and effects of the racemic and other mixtures is a wide-open area in the field of psychedelic research. Much remains unknown about the effects of ketamine and the mechanisms of action of its metabolites, necessitating further research on the drug and its potential benefits.

Melody Pezeshkian holds a B.S. in Psychological and Brain Sciences and has worked in the fields of brain science, mental health, and psychedelic medicine.

While much remains unknown, what has been proven unequivocally is that it relieves, and some would say, cures depression for many, if not most people … the why and how of this miracle drug may remain a mystery for some time, but its efficacy will not …

The structures used to illustrate ketamine enantiomers are incorrect and very confusing to chemist and layperson alike. The convention is to have triangular bonds representing bonds coming towards the viewer, there can’t be two of them. The bond going away from the viewer should be slashed. For most purposes it might be better to use the older schematic, for example the one in this article:
https://www.google.com/search?q=ketamine+enantiomers&client=ms-android-uscellular-us-revc&prmd=inv&sxsrf=ALeKk03kU5tLGGAVQMWLpO-22Z3XYXxqug:1620316232580&source=lnms&tbm=isch&sa=X&ved=2ahUKEwiOq92rtLXwAhUCqZ4KHaLZCfAQ_AUoAXoECAIQAQ&biw=320&bih=447#imgrc=Vw9KPYP7Y0n8gM

Thanks for your comment, Steven. That image is taken from reference #4, Muller et al. 2016 if you want to contact them directly with your comments. The article is kind of a deep subject, and I think the image is suitable for showing readers the structural differences.