Note – The names of enzymes often end in the suffix -ase.

Additional work done by this research team in May 2018 added to the knowledge base of the enzymatic synthesis of psilocybin by magic mushrooms.2 In this new study, they enhanced psilocybin production in vitro by adding TrpB, the tryptophan synthase of the mushroom Psilocybe cubensis, to the reaction. This observation is important because it shows mushrooms can make psilocybin using 4‐hydroxyindole and L‐serine as substrates. When it comes to making psilocybin in the lab, these other substrates costs less money than those used in previous synthesis methods.

Visualizing the Biosynthesis of Psilocybin

The website for Queen Mary University in London, UK has an informative diagram of the biosynthesis of psilocybin from tryptophan which is shown in Figure 1. Magic mushrooms also contain trace amounts of psilocin, and the diagram shows the pathway for mushrooms to convert psilocin into psilocybin, too. The European Community (EC) designations in the diagram and their corresponding enzymes are as follows: 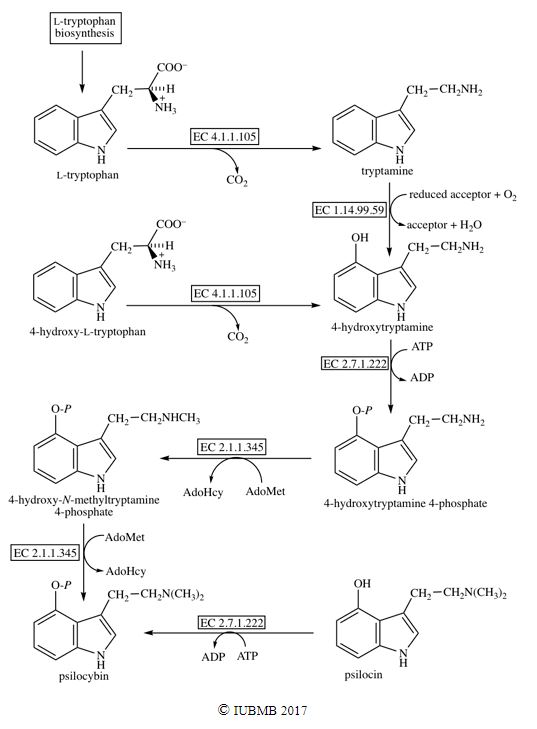 A World of Possibilities for Discovery

Scientists are slowly teasing apart and understanding the biochemical pathways magic mushrooms use to synthesize their psychoactive compounds. As these organisms are studied and more is learned, researchers can apply the information to understand how the compounds may work in the human body.