There is significant experimental evidence showing the effectiveness of ibogaine and its primary metabolite noribogaine in treating various substance abuse disorders in animals.1–3 There are also case studies and reports describing ibogaine’s effectiveness in giving fast and long-lasting relief from drug cravings and withdrawal symptoms in humans.4–6 Researchers are at work teasing apart the mechanisms that are causing the anti-addictive effects of these compounds.

An April 2020 study published by Rodríguez et al. in ACS Chemical Neuroscience investigated the effects of ibogaine and noribogaine on an animal model of depression.7

The study has two main parts. The first utilized a behavioral assay for rodents called the forced swim test (FST), which measures their depressive behavior.8 Briefly, the theory is that the experiment causes stress on the rodents (stress is often a component in major depression in humans). Rats that are not depressed will try to escape by swimming and trying to climb out. Depressed rodents will not attempt to escape, indicating “behavioral despair.”

The second aspect of the study was gathering pharmacological data. The researchers measured the concentration of ibogaine and noribogaine in the blood plasma and brains of rats over time. By aligning these data with the FST results, they could associate behaviors with the presence and concentration of each compound.

Separate groups of rats received ibogaine and noribogaine in doses 20 or 40 mg/kg, i.p. before the FST and pharmacokinetic measurements. The control groups received i.p. injections of 5% ethanol and saline, the vehicle (carrier) of the test compounds

The FST was run at 3 and 24 hours after administration. The researchers chose these times because of studies in the literature. This previous work showed that ibogaine and noribogaine are expected to have pharmacologically and behaviorally relevant concentrations in the brain by 3 hours. Conversely, by 24 hours, the concentration of the compounds should be too low to cause any effects.

The pharmacokinetic measurements were done at several time intervals after the administration of ibogaine and noribogaine. All the rats used in the study were of the same type, age, sex, and had similar body weights.

The Effects Are Time- and Dose-Dependent

Three hours after i.p. administration of ibogaine, both test groups of rats displayed a significant reduction in their immobility in the FST compared to controls. The more significant effects were observed in for the rats given the 40 mg/kg dose. Both ibogaine and noribogaine were found in the brain tissue and plasma of the rats at this time. Figure 1 shows brain concentrations of ibogaine and noribogaine of 9.9 µM/L and 21.0 µM/L, respectively, at three hours. 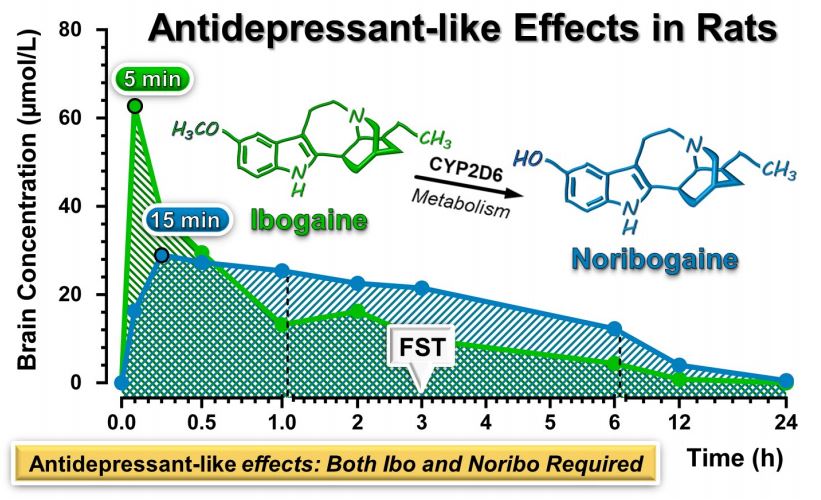 As expected, by 24 hours, no significant effect was observed in the FST for either dose. Concurrently, ibogaine was not detectable in the brain tissue or plasma of the rats. There was only a small residual amount (averaging 0.5 µM/L) of noribogaine detected.

Noribogaine i.p. administration of 40 mg/kg had a “significant and robust” dose-dependent antidepressant-like effect on the rats in the FST and was correlated with high concentrations in the brain. The 20 mg/kg dose did not produce these effects. Interestingly, noribogaine’s effects had a shorter duration than ibogaine in the FST. The effects were present 30 minutes after administration but were gone at three hours.

Ibogaine Alone Does Not Drive the Antidepressant-Like Effects

In the next step, the data were analyzed to see if ibogaine by itself was causing the antidepressant-like effect or if the metabolite noribogaine was also at work. To test this, the researchers had to use a different route of administration for the compounds.

Compounds are subject to first-pass metabolism in the liver when they are given via an i.p. injection. However, intravenous (i.v.) administration of ibogaine bypasses this metabolism, resulting in less ibogaine being converted to noribogaine.

Using an i.v. administration of ibogaine also required a change in doses. This is because at a test dose of 10 mg/kg i.v., they observed behavioral impairments in the rats such as tremors, forepaw tapping, and staggering locomotion that lasted for 30 minutes. These effects could impact the results of the FST.  Therefore, the i.v. doses of ibogaine were lowered for the test groups to 1 and 5 mg/kg, respectively. The FST was done one after i.v. administration.

Statistical analysis of the data showed no significant effect on immobility at either ibogaine dose. However, the researchers observed “…a trend for reduction in the immobility time…” from the 5 mg/kg dose. Yet, there was no robust antidepressant-like effect in the FST, as was seen after i.p. administration of ibogaine. Pharmacokinetic analysis showed there was only a minimal amount of noribogaine in the brain at the time.

They commented further: “While it is likely that ibogaine would show a reduction in the immobility time at higher concentrations, it is not feasible to examine higher doses due to the above-mentioned behavioral side effects that are not compatible with animal performance in the FST.”

What is Causing the Antidepressant-Like Effect?

Knowing that ibogaine was not acting alone to produce the antidepressant-like effects, the next step was to figure out if and how noribogaine (or another compound) was involved.

In analyzing all the FST and pharmacokinetic data, the authors made these general observations:

In summary, the authors stated,

…both ibogaine and noribogaine were present in rat brain at concentrations that cannot produce the same behavioral outcome on their own.

Therefore, these results suggest that both ibogaine and noribogaine are required to elicit the antidepressant-like effects seen in the FST. The authors suggest there may be a synergistic or additive effect produced when both compounds are present. It is also possible that an unknown metabolite of ibogaine that causes an antidepressant-like effect is formed after i.p. but not i.v. administration.

In conclusion, the authors said,