4-HO-DPT is a close structural analog of psilocin. 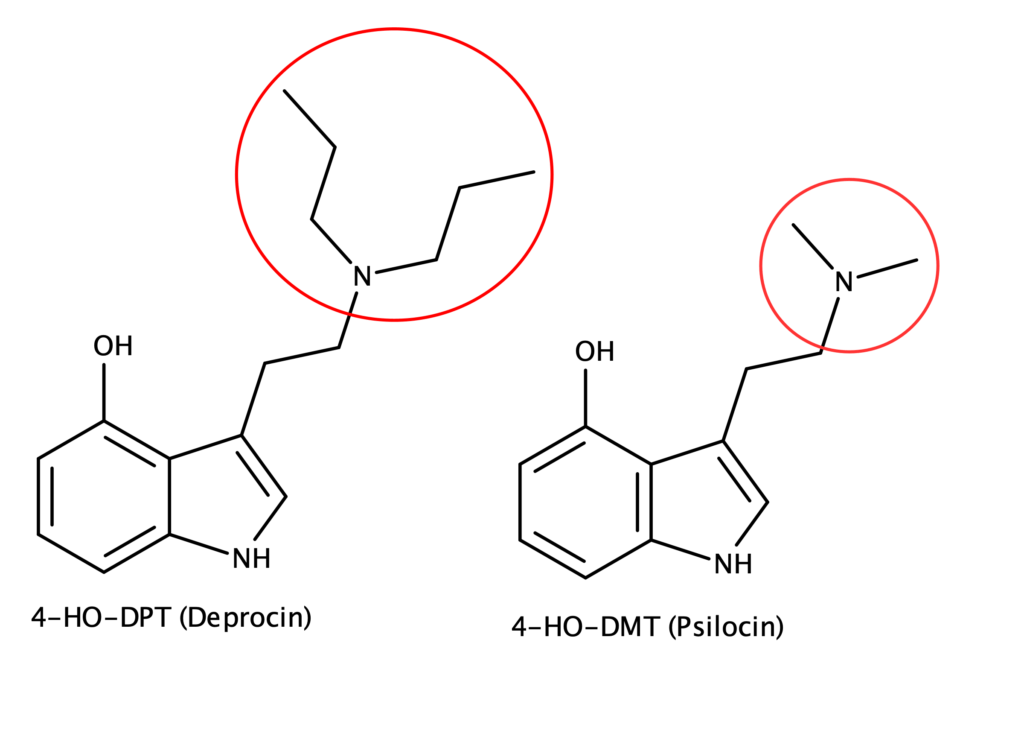 4-HO-DPT was first synthesized as a freebase by Repke et al. in 19772 (compound “4b”).  Repke reported the proton NMR spectrum and melting point (96-97 C) for 4-HO-DPT freebase.  Subsequently, Alexander Shulgin discussed 4-HO-DPT in his 1997 publication of TiHKAL.4 Shulgin described a similar synthesis of 4-HO-DPT freebase and measured the same melting point (96-97 C) as Repke.  Like Repke, Shulgin did not further characterize the molecule. He did make any salts. Shulgin reported both the dosage and duration of 4-HO-DPT as “unknown” based his observation: Consuming 20 mg orally reposting in subjective effects that were “possible threshold, nothing more.” 4-HO-DPT was not further investigated. Shulgin noted, “It is a shame that the compound is so difficult to make.”

Presence of 4-HO-DPT in Nature

4-HO-DPT is a synthetic compound and has not been found to occur naturally. In 1990, mushroom researcher Jochen Gartz patented a method for adding DPT to mushroom growth medium which resulted in the mushroom fruiting bodies containing 4-HO-DPT.1  Gartz reported extracting 4-HO-DPT and measuring its melting point (102 °C), consistent with that reported by Repke and Shulgin for the freebase form.

In December of 2020, Klein et al. published a paper on “The Structure-Activity Relationship of Psilocybin Analogs, including 4-HO-DPT hemifumarate and 4-AcO-DPT fumarate.7 However, the authors of that paper did not provide any information about the source of those molecules, stating that they were from previous studies. The paper provides in vitro (functional assays) and in vivo (Head Twitch Response) data for each of these compounds. Compared to psilocin, 4-HO-DPT is more active at 5-HT2A with less off-target activity at 5-HT2B. However, according to Klein’s data, 4-HO-DPT is less potent in animal models (HTR), which is consistent with Shulgin’s report that consuming 20 mg orally resulted in an experience that was “possible threshold, nothing more.”4

Future Applications of 4-HO-DPT and Prodrugs

Given the advantages in 5-HT2A versus 5-HT2B activity and the anecdotal evidence suggesting different clinical properties, 4-HO-DPT has been proposed as a psilocin alternative.  As with psilocin, there are advantages to administering a prodrug of 4-HO-DPT because of improved stability.