Last week, COMPASS Pathways announced that it acquired an intellectual property (IP) portfolio of novel psychedelic compounds and prodrugs. According to the press release, “The substances covered in the IP portfolio include a variety of psychedelic and empathogenic compounds, some of which are prodrugs.”

COMPASS’s press release defined prodrugs as “pharmacologically inactive compounds which are metabolized inside the body to produce an active drug.” As discussed below, COMPASS’s lead candidate (psilocybin, “COMP360”) is a prodrug of psilocin.  According to a review article by Jarkko Rautio et al. in Nature Reviews Drug Discovery, “Prodrugs are molecules with little or no pharmacological activity that are converted to the active parent drug in vivo by enzymatic or chemical reactions or by a combination of the two”1 (Figure 1).

Figure 1: Schematic depicting the concept of how prodrugs are transformed into their active forms.

As the simple scheme above illustrates, there are three key questions to answer about how a prodrug converts into an active drug:

Prodrugs represent an important class of pharmaceutical development. In the ten-year period between 2008 – 2018, the US Food and Drug Administration approved at least 30 prodrugs, which accounted for more than 12% of all approved small-molecule new chemical entities.1

Psilocybin is the Most Well-Known Psychedelic Prodrug

Prodrugs are important within the field of psychedelic research and drug development. For example, psilocybin is most frequently described as the active component in magic mushrooms. But, psilocybin is technically a prodrug of psilocin. When consumed, psilocybin is rapidly metabolized into psilocin2 (Figure 2). Psilocin is the active drug: The data from receptor binding studies at serotonin 5-HT receptors confirms psilocybin’s role as a psilocin prodrug.3 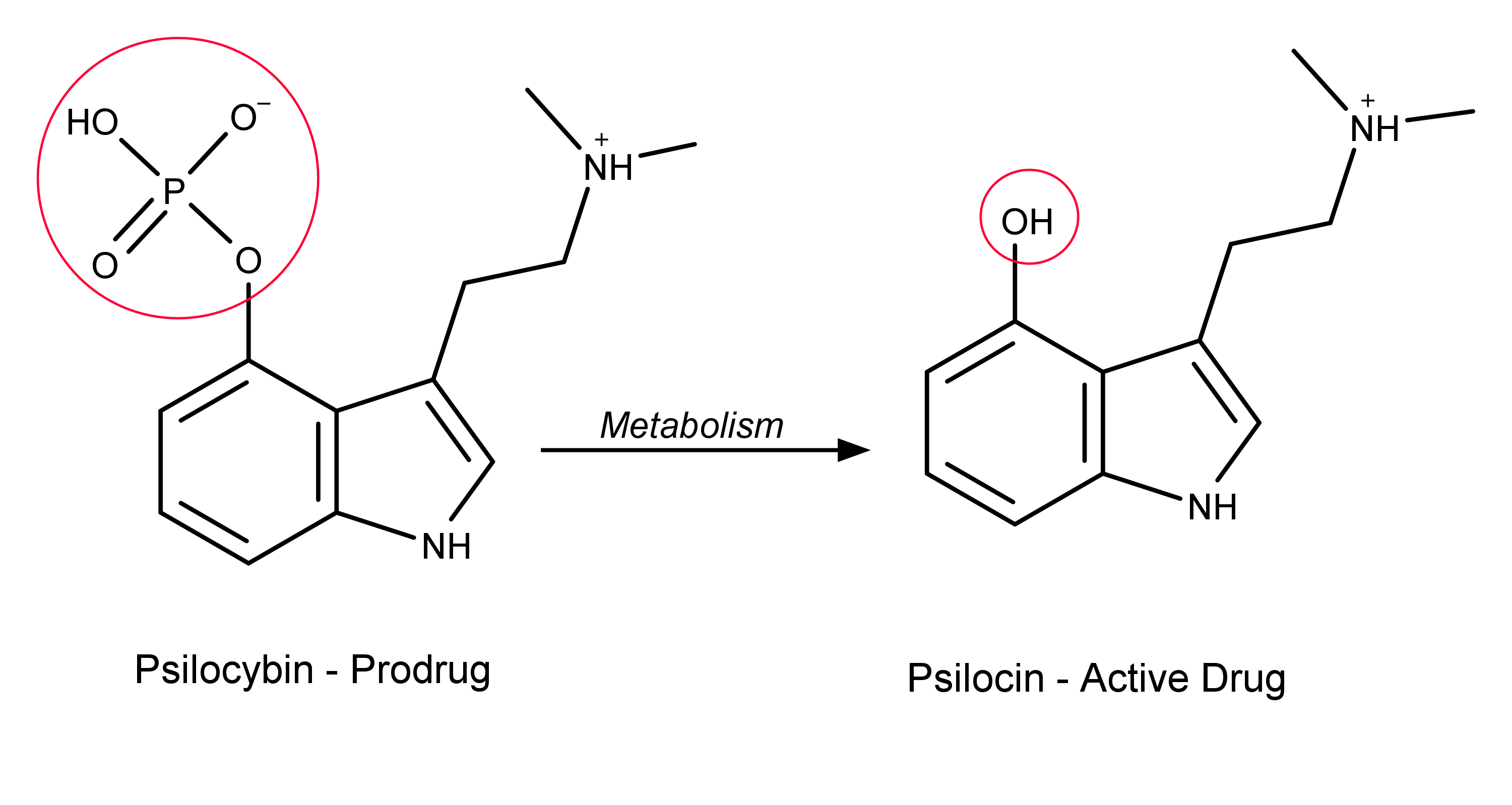 Figure 2: The metabolism of psilocybin to its bioactive form psilocin via removal of the psilocybin’s phosphate group.

The metabolism of psilocybin to psilocin proceeds via a hydrolysis reaction.4 The 4-phosphate ester of psilocybin is hydrolyzed, resulting in psilocin. (The term hydrolysis refers to any chemical reaction in which a molecule of water breaks one or more chemical bonds. For example the oxygen-phosphorus bond in psilocybin, Figure 2.) Other psilocybin derivatives present in magic mushrooms probably follow analogous metabolic pathways (hydrolysis of a 4-phosphate ester into a 4-hydroxy group) when ingested. Examples include:

In addition to these four naturally occurring psilocybin derivatives in magic mushrooms, other synthetic prodrugs of psilocin have been designed. For example, in 1963, chemists Albert Hofmann and Franz Troxler patented 4-AcO-DMT (aka psilacetin) along with other indole esters, which were all synthesized and described as their free base or zwitterionic forms.5 In 1999, David Nichols reported the fumarate salt of 4-AcO-DMT, first describing the compound as a prodrug, i.e. the “O-Acetyl Prodrug of Psilocin”6 (Figure 3).

Using the same chemical reaction as the above described naturally occurring psilocybin derivatives (psilocybin, baeocystin, norbaeocystin, and aeruginascin), 4-AcO-DMT is converted into psilocin via a hydrolysis reaction. More scientific papers describing 4-AcO prodrugs are appearing in the current literature.7 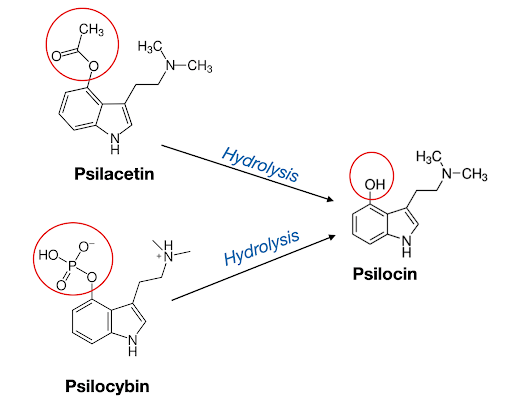 Figure 3: Image depicting how psilacetin (4-AcO-DMT) and psilocybin are both prodrugs of the bioactive compound psilocin via a hydrolysis reaction.

Similar prodrugs have been designed for structurally similar active compounds. For example, in December 2020, Adam Klein et al. published work on the Structure-Activity Relationship of Psilocybin Analogues, including eight 4-Acetoxy-N,N–dialkyltryptamines, which were used as fumarate or acetate salts.3 They found that the 4-acetoxy-N,N-dialkyltryptamines were significantly less potent as 5-HT2 receptor agonists, noting that “the potency of the O-acetylated tryptamine was about an order of magnitude weaker (ranging from 10- to 40-fold) compared to their 4-hydroxy counterparts.”

Figure 4: Schematic showing how a hydrolysis reaction converts a 4-acetoxy tryptamine into a 4-hydroxy tryptamine.

The Future of Psychedelic Prodrugs

COMPASS’s recent press release illustrates the potential for developing new psychedelic prodrugs– even when the active compound was previously known. Dr. Matthias Grill noted that the technology acquired by COMPASS was “Inspired by the work of chemists like Albert Hofmann and Alexander Shulgin”  and that he was “proud to be developing these evolved compounds,” alluding to improvements made in prodrug design.

Dr. Grill also pointed out that “Chemistry still happens inside the flask and not on paper,” highlighting the amount of experimental work required to design, synthesize, and test novel prodrugs– even where the active compound was previously known. Here, Lars Wilde, Chief Business Officer, President and Co-founder of COMPASS Pathways, touches on the commercial incentives for developing prodrugs and “novel derivatives of known compounds,” namely the ability to create patentable compounds: “This agreement will strengthen and expand our IP and development portfolio with new compounds.”

Prodrug compounds can be administered to the subject, where they are converted in vivo via an enzymatic or non-enzymatic reaction, e.g., hydrolysis, into a known active compound. Accordingly, prodrugs offer an alternative means for administering an active compound. And, unlike the active compound, a prodrug’s physical properties (solubility, stability, crystallinity, melting point, etc.) and biological properties (e.g., rate of conversion into the active, absorption, distribution, etc.) can be optimized. For these reasons, prodrugs of known active psychedelic compounds are an exciting area for future research and development.

Hello Barbara. This is the kind of information I have been looking for. Thank you for a very informative article.

In drug design, prodrugs are used 1) to improve pharmacokinetic profile of compounds with poor bioavailability or distribution and 2) for patent “evergreening” – i.e. doing minimal change but hoarding IP rights. As psilocybin (already being a prodrug!!!) has excellent oral pharmacokinetics, the development of other prodrugs is clearly for, and only for, the second abovementioned reason. This endeavor is not only wasting resources while adding no benefit to psilocybin therapy, it is also naïve to think that one can prove that one prodrug is better than another in clinical trials, given the already optimal pharmacokinetic profile of psilocybin. Can… Read more »