The psychedelic literature often refers to the dephosphorylation of psilocybin (a prodrug) into psilocin in the body. Psilocin is acknowledged in the scientific community as the active agonist compound that binds to serotonin 5-HT2A receptors and elicits the psychedelic experience.1 But what data support the conclusions about the metabolism of psilocybin in the first place?

In a 2002 clinical study, a research team including Franz X. Vollenweider investigated the metabolism of psilocybin and the elimination kinetics of psilocin.2 Eight volunteers received psilocybin in oral doses of 212 ug/kg body weight. Their urine was collected for 24 hours and psilocin concentrations were determined by high-performance liquid chromatography with column switching and electrochemical detection (HPLC-ECD).

The data revealed that the orally administered psilocybin was rapidly metabolized to psilocin. The psilocin excretion rate during this period was 55.5 (+/-33.8) ug/hour. Peak psilocin concentrations up to 870 ug/L were measured in urine samples during the 2-4-hour collection interval. All the detectable psilocybin and psilocin were metabolized and excreted within 24 hours of being ingested. The limit of quantitation (10 ug/L) was reached about 24 hours after drug administration.

In 2017, Dinis-Oliveria published an article that comprehensively reviewed the psilocybin and psilocin metabolism literature.3 Notably, the paper captures all the major and minor psychoactive metabolites of psilocybin and the enzymes that produce them (Figure 1). 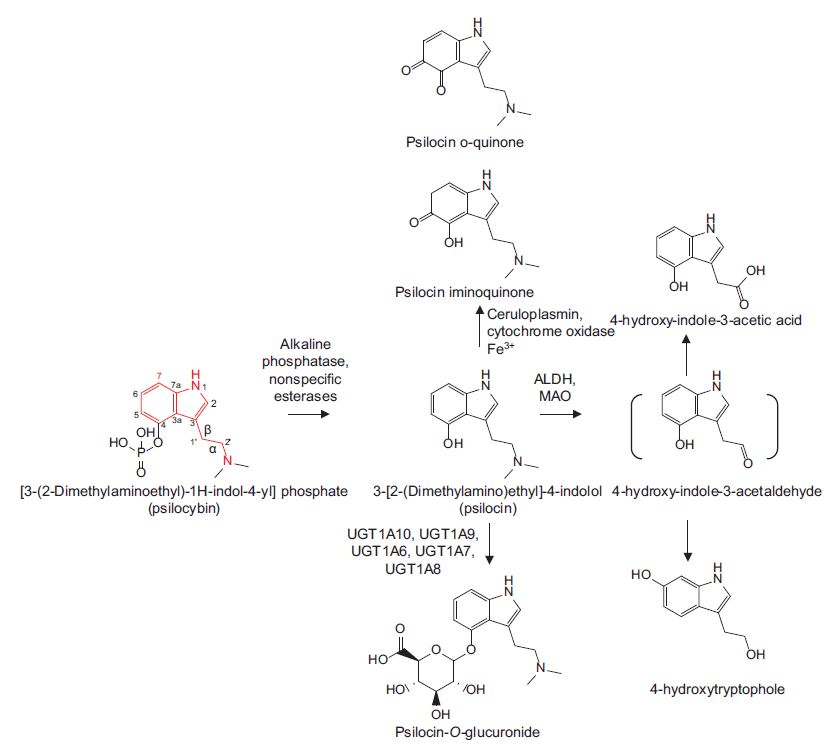 Figure 1: The metabolism of psilocybin.3 The tryptamine skeleton of psilocybin is shown in red. ALDH = aldehyde dehydrogenase, MAO = monoamine oxidase, UGT = enzymes in the uridinediphosphate-glucuronosyltransferase class.

While this work helps elucidate the metabolism and pharmacology of psilocybin and psilocin, several structurally similar derivatives such as baeocystin, norbaeocystin, and aeruginascin have been ignored by researchers. This leaves lingering questions as to whether they behave similarly to psilocybin, psilocin, or both or if there are important differences in terms of pharmacology and metabolism.