Note: Since the publication of this article, researchers have identified the compounds responsible for magic mushroom bluing. See the Psychedelic Science Review article “Study Identifies Compounds and Mechanism that Causes Psilocybin Mushroom Bluing.” 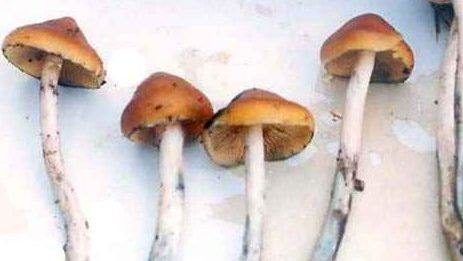 Blue bruising of Psilocybe azurescens – Note the blue color on the stem and along the edge of the cap. Image from Drugs-Forum.com.

Although the bluing reaction is widely known and discussed, no one has identified the cause of the bluish color.  According to Paul Stamets in Psilocybin Mushrooms of the World, “No one, to date, has been able to pinpoint the chemical structure of the bluing compound.”

Stamets contends that the bluish pigmentation is “a result of a phenomenon paralleling the degradation of unstable psilocin (dephosphorylated psilocybin) to presently unknown compounds by enzymes within the mushroom cells. What this means is that when a Psilocybe or Panaeolus bruises bluish, the color reaction is a co-indicator that psilocin is or was present. Naturally, since the bluing phenomenon appears to be a parallel decomposition sequence, the more the mushrooms are bruised the less potent they become.” 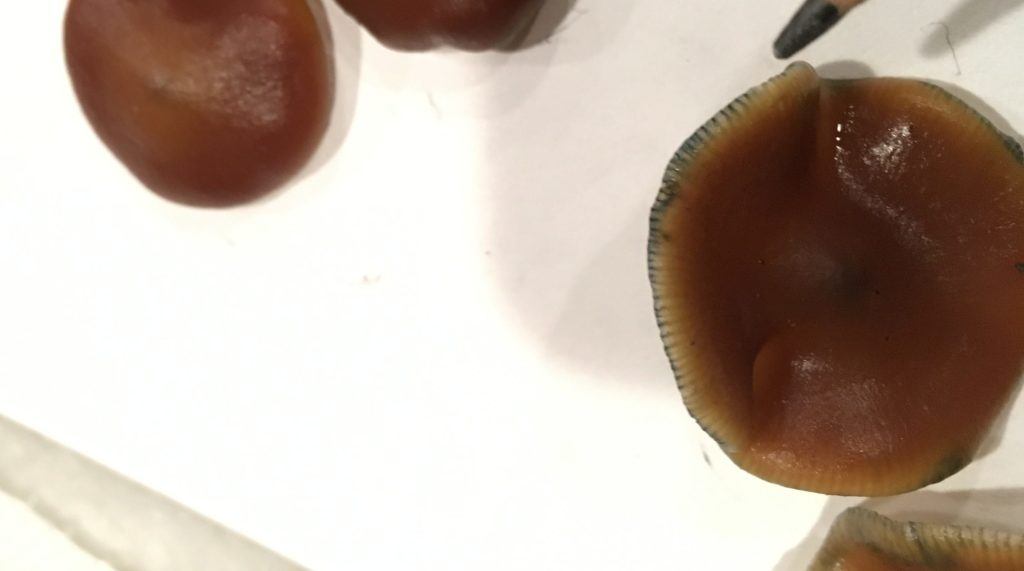 Bluing reaction of Psilocybe cyanescens, an active psilocybin mushroom. Note the blue color around the edge of the cap. Image from Drugs-Forum.com.

Other researchers agree that the bluing has little to do with the overall content of psilocin or psilocybin.1-3 If the blue color arises from the degradation of active molecules, then at best it provides an indicator of how potent the mushroom was – before the bruising. Notably, several mushrooms (e.g., some Boletus species) which do not contain any psilocybin or psilocin have a bluing reaction. However, that bluing reaction in those species is probably different —  namely different molecules, a different shade of blue, and a different reaction leading to it.  It is also known that some mushrooms that do contain psilocybin and psilocin do not bruise at all.

What Is Known About the Blue Coloring?

Several different explanations have been offered for the bluing reaction in psilocybin mushrooms.  The correct answer must account for all of the known facts.  Here is a summary of the significant facts taken from the references at the end of this article:

It has been known since the 1960s that psilocin is readily oxidized by enzymes to a blue color in various animal tissue preparations.4–7 The blue color obtained when psilocin is incubated with the enzyme copper oxidase from mammalian serum had an absorption spectrum of 620-625 mµ and a smaller peak at 400 mµ.8 It has been proposed by researchers and summarized by Dinis-Oliveria that the blue component may have an o-quinone or iminoquinone structure.9 However, these studies using mammalian tissues may not represent the mechanism by which the blue color forms in Psilocybe species.

In 1960, Blaschko and Levine proposed two possible structures for the blue oxidation product from psilocin: 7

Two possible structures proposed by Blaschko and Levine in 1960 for the molecule created from the psilocybin bluing reaction.7

In 1967, Levine reported in Nature that the oxidative formation of the blue color from psilocin could be accomplished without enzymes in the presence of ferric iron.8 A further test showed EDTA (ethylenediaminetetraacetic acid) and other chelating agents (chemicals that react with metal) blocked the reaction, verifying the observation was correct. Based on an analysis of the research at the time, Levine proposed the following reaction for the formation of the blue product:

Proposed Mechanism for the Bluing Reaction

Based on the above facts, it appears that the bluing reaction requires two components: (1) a psilocin derivative and (2) another biological component present in some but not all psilocybin mushrooms. See facts 5 and 6 above.

It is proposed that the blue color is due to a transition metal compound (probably a copper compound) comprising a psilocin derivative. The copper reagent probably comes from an enzyme present in many (but not all) species of psilocybin-containing mushrooms.  Upon exposure to oxygen and water, psilocybin/psilocin reacts with the copper reagent to generate a new (blue, water soluble) copper coordination compound.  Many copper compounds are known to have a deep blue color.4  Notably, many copper amines are deep blue.  The most famous (and fundamental) example is probably adding ammonia to a solution of copper2+ ion.5

This mechanism also accounts for facts 3 and 4 above because adding ascorbic acid to the solution would destroy the blue copper compound, e.g., by reducing the copper from Cu2+ to Cu1+.

Further Research Regarding the Bluing Reaction

For example, could one synthesize and characterize a series of copper tryptamine compounds, demonstrating a blue color?  If so, that could also explain the varying shades of blue that are observed in different species of mushrooms. From Shroomery: “There is also another tryptamine alkaloid found in some mushrooms, called aeruginascin. It is believed to contain phosphorus like psilocybin, norbaeocystin, and baeocystin. Mushrooms with this alkaloid tend to stain greenish-blue instead of the normal cyan blue that regular psychedelic mushrooms stain.”

I picked up similar mushrooms on a dead tree and left them on a paper towel for couple days. It turned out to be black dusty material. Does magic mushroom do that?

No, those would be the mushroom’s spores. Definitely not good to inhale in large amounts

What about the stem chew it till it dissolves 4 full affect,a and does the stem have a punch to it as the CAP??
? saying my PHONE is to low of memory¿¿¿¿¿¿¿

I had a friend that are interested in all types of mushrooms even cylocibin blue cap in the California Region of Mendocino Cow pastures after a rain the Cow patties have the same chemicals ammonium nitrate and the Copper is the dirt mixed with red clay. He always been fascinated with them.

In the book: A key to the American psilocybin mushroom Paperback – January 1, 1972by Leonard Enos (Author). It is well described and defined that the Kodak Photographic Paper Processing chemical “DEKTOL” {https://www.digitaltruth.com/products/kodak_msds/Kodak-Dektol_Paper_Developer-MSDS.pdf} accelerates the bluing in all psilocybin mushrooms tested [15 species in North America and South Canada]. Additionally, it is well known anecdotally that both Local Hawaii species and Thailand species also react to same Dektol solution field test. [In Hawaii: as long as mushroom is found in cow pie, it is considered safe]. Most mycologists prepare a small field solution using DEKTOL powder kept in ziploc bag and mix small… Read more »

Back in the ’70’s, the joke at work about the picking of ‘safe’ magic mushrooms was – ‘if it don’t turn blue – don’t chew’. Thanks to the authors of this story for confirming that amusing little dopers’ ditty.

Does the blue occur in the spawn, and if so dies it react to being shaken. My hard turn blue then relax to white…

I am making cement mushrooms. Just wanted them to look realistic, sorta.

I have harvested mushrooms in central Cal/San Joaquin Valley area that “blued” quite dramatically although they were more of a blue-green tinge. Definitely were not hallucinogenic as after tentative sampling I wound up using them in considerable quantity for culinary purposes. Similar taste character to Shiitake or maybe more like Pleurotus a species commonly found on stumps (they are grey and produce shelf-like structures. These shrooms were a tan-mixed with grey tone. I have found scent to be a reasonable guide to culinary use. If it smells like dirty socks it’s better to leave it alone. The San Francisco Mycological… Read more »

“If it smells like dirty socks it’s better to leave it alone….”.

Tricholoma matsutake smells a bit like dirty socks, but is quite highly regarded — at least among the Japanese.

As for determining the culinary value of an unknown mushroom by scent, A. phalloides is reported to be quite delicious, and it does not smell unpleasant.