Despite many anecdotal reports of WLP, no controlled scientific studies have been conducted to find its cause. As a result, there is no consensus as to either the cause or solution to this longstanding problem.

In October of 2017, we summarized the available anecdotal reports about the symptoms and attempted treatments for WLP. Based on the information available, we concluded that there are four leading theories:

Below, we discuss one type of microbial contamination that could account for the observed WLP symptoms.

Many varieties of wood loving mushrooms develop a black rot on their caps and stems. This rot is often described as blue-black in color. The bluish color is presumably caused by the rot damaging the mushroom resulting in the well-known blue bruising phenomenon.

The photo below shows one example of advanced (or severe) black rot on a sample of Psilocybe cyanesens mushroom fruiting bodies. One particularly interesting observation captured in the photo is the presence of an opaque white liquid that seems to accompany the development of the black material. What is this black material? What is the white liquid that seems to accompany the developing black rot as it spreads? 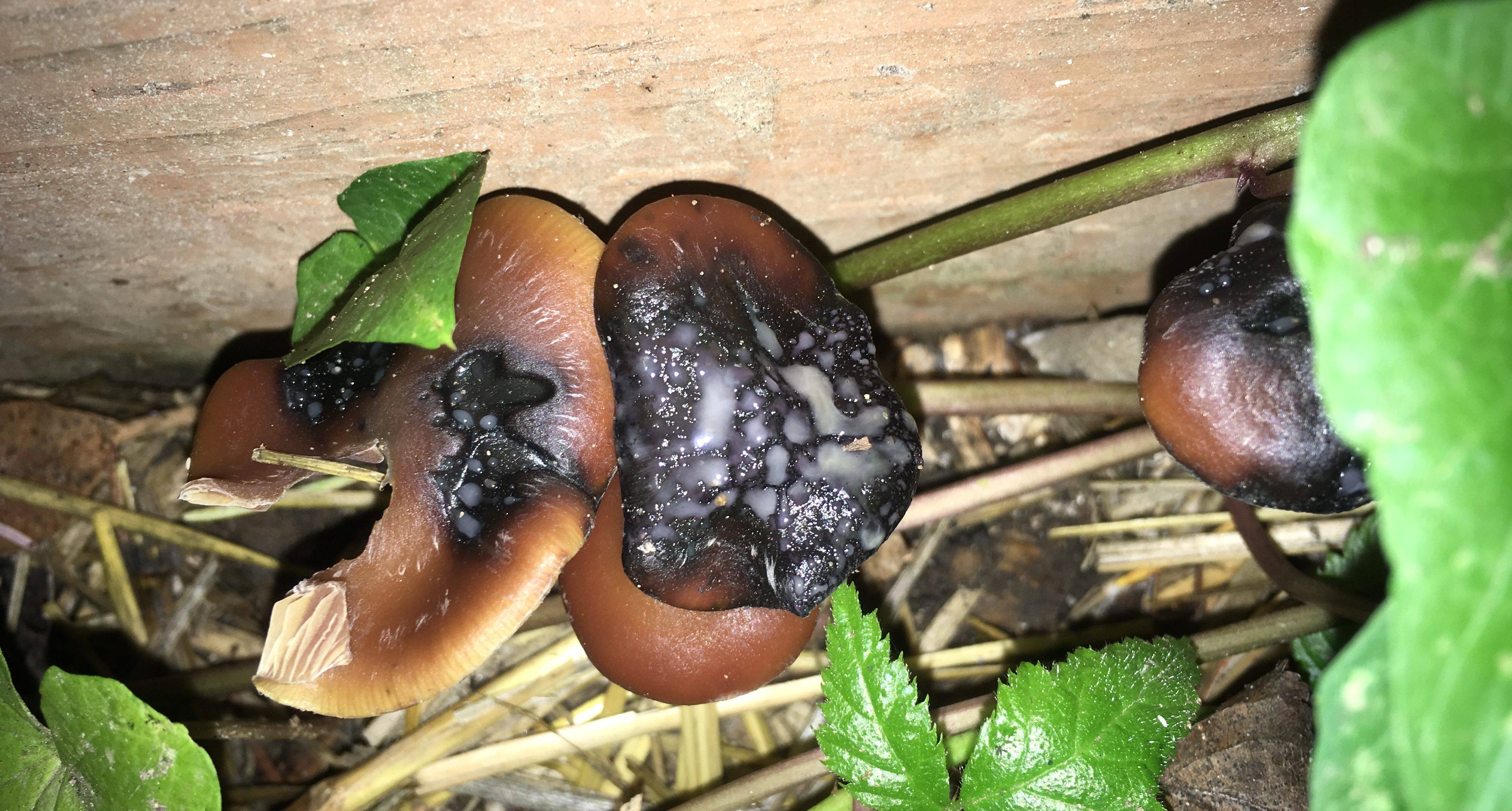 Note the severe black rotting on these Psilocybe cyanesens. Further, note the milky white material developing in the black rot.

Black rot is a reasonable potential cause of WLP. The black rot is much more prevalent on wood-loving mushrooms like Psilocybe cyanesens and Psilocybe azurescens.  These mushrooms are often harvested outdoors where they are likely to encounter microbes. This would explain why there are relatively few (if any) reports of WLP arising from indoor cultivated mushrooms such as Psilocybe cubensis. Arguably, controlled indoor conditions prevent contamination. Ultimately, preventing the contamination prevents the occurrence of WLP.

Ive notice that anything over a gram of wood lovers will cause paralysis. An 1/8th?! damn I bet you couldn’t walk lol. How much Benadryl did you take and how did you feel? You would need to continually take Benadryl at a dose relevant to how may shrooms u ate plus how much you weigh. And continue to take it into next day or as long as you are feeling the negative effects….which I don’t really recommend. There are other better treatment options. The Benadryl treatment was the first thing I ever tried that worked but it did not work… Read more »

Hi Barb! This is djbabyjesus. You may have seen me in such threads as “The Cure for Azurescens Paralysis” I’m the person that came up with the Diphenhydramine (Benadryl) treatment option, which does in fact provide some, but not 100% relief). I was surprised and excited to see you quote some of my posts from the chat forms. These posts however, are about 10 yrs old. I haven’t posted in a while but after reading your research in to Aeruginascin and its potential action at the 5HT3 receptor, my mind went ablaze. I went a head and started another thread… Read more »

A note about the The Black Rot Hypothesis. first of all, The paralysis occurs wether the mushrooms are damaged or not. So no black rot but I do have a possible explanation for why there are so few, but not zero, (Paul Stamets has experienced it from home grown cyans) reports of home grown WL’ers causing negative effects. At one point I noticed that the azures from some locations (private, out side of public parks) were less likely to cause the paralysis. These locations were visited often by me, and I never let them get very old or damaged… The… Read more »

So is it a genetic issue or only when on wood substrate?