There are over 300 known species of psilocybin mushrooms throughout the world.1 These fungal factories produce molecules which, upon entering the human brain, can elicit ineffable psychedelic experiences in humans.2 These experiences are often varied, a phenomenon anecdotally attributed to the differences in the alkaloid content of different species.3,4 This idea carries some weight. Psilocybin and its active metabolite psilocin are produced through a series of biochemical reactions, which produce intermediate products on the way to the final psilocybin product (Figure 1). These intermediate products are structurally similar to psilocybin, and can concentrate at varying levels in different species.3 Differences in how this chemical pathway proceeds across species results in different concentrations of psilocybin, psilocin, and their intermediate products across species.

An outstanding question in the psychedelic research field is whether these structurally similar intermediate molecules are themselves psychoactive. If so, they may produce an important entourage effect that might be utilized to optimize and modulate the psychedelic experience. Although there is currently no evidence for their therapeutic potential, more research is required to understand if and how these molecules have subjective and/or therapeutic effects in isolation.

Figure 1: Chemical structures of norbaeocystin, psilocybin, and psilocin. The enzyme psiM methylates the amine on norbaeocystin twice to form psilocybin. When psilocybin enters the body, it is dephosphorylated into psilocin. Psilocin traverses the blood-brain barrier and binds to 5-HT2A receptors.

A challenge to studying intermediate products is obtaining pure samples. A full synthesis of norbaeocystin, a major intermediate to psilocybin, was recently published.5 However, this synthesis is resource-intensive, which still poses a challenge to behavioral research. An alternate, less resource-intensive strategy for producing pure samples of norbaeocystin is through biosynthesis. Biosynthesis involves the use of genetically modified bacteria or yeast to overproduce a specific molecule. In 2019, Alexandra Adams and colleagues from Miami University developed a biosynthetic route to psilocybin using the genetically engineered bacteria E. coli.6 Now funded by PsyBio Therapeutics, this same group set out to apply this platform to the production of norbaeocystin. In their most recent paper, “Development of an E. coli-based norbaeocystin production platform and evaluation of behavioral effects in rats”, this same group sought to alter their biosynthetic psilocybin technique to produce pure norbaeocystin. Further, they tested their norbaeocystin against psilocybin in a rat behavioral model to determine if norbaeocystin has psychedelic properties on its own.7

Engineering bacteria is like designing a factory. What machinery do you need to build your product? How can you optimize this machinery to obtain the maximum amount of your product? Biosynthetic researchers ask similar questions when building E. coli strains that can produce large amounts of molecules naturally found elsewhere.

In their previous study developing a psilocybin-producing strain of E. coli, Adams and colleagues measured low levels of norbaeocystin production. Instead of developing an entirely new strain of E. coli, they reconfigured this strain by removing the gene encoding psiM, the final enzyme in the psilocybin pathway. This resulted in a new E. coli strain that produces norbaeocystin as the end product.

Once they confirmed their bacterial factory could produce their desired product, they had to optimize the process. Norbaeocystin is synthesized in the cell by a three-step process involving a tryptophan synthase (trpB) enzyme native to bacteria, and the psiD and psiK enzymes from fungi. These enzymes are encoded by three separate genes in the bacterial DNA. Optimization of norbaeocystin production starts by screening multiple variations in how and to what extent these genes are transcribed and translated into their protein forms.

To manipulate gene transcription, a DNA sequence known as a promoter region is inserted before the gene of interest, increasing the likelihood it will be transcribed. Adams and colleagues tested multiple different promoter regions to determine which one resulted in the highest norbaeocystin production. They also tested how putting one promoter before the three DNA sequences encoding the enzymes compared to putting promoters before each of the DNA sequences individually. They found that a strain named Nor 1, containing the mutant promoter C4, resulted in the highest norbaeocystin production. Upon rescreening, this strain produced up to seven times more norbaeocystin than strains with the original promoter. They also found that placing this promoter before all three DNA sequences resulted in more norbaeocystin than when it was placed before each of the sequences individually. The researchers further optimized norbaeocystin production by altering the nutrients in the Nor1 strain growth chamber. They identified that the media does not require an added buffer solution, which is ideal for scaling up production and cost competitiveness of the process.

Having achieved gram-scale production capacity of norbaeocystin and psilocybin,6 Adams and colleagues set out to test the ability of norbaeocystin and psilocybin to elicit the head-twitch response (HTR) in rats (Figure 2). HTR is a rodent behavioral response to 5-HT2A receptor activation that reliably discriminates between hallucinogenic and non-hallucinogenic 5-HT2A agonists.8 For this reason, it is often used to assess whether a 5-HT2A agonist is likely to elicit psychedelic effects in humans. Here, they measured HTR after applying increasing doses of psilocybin and norbaeocystin. 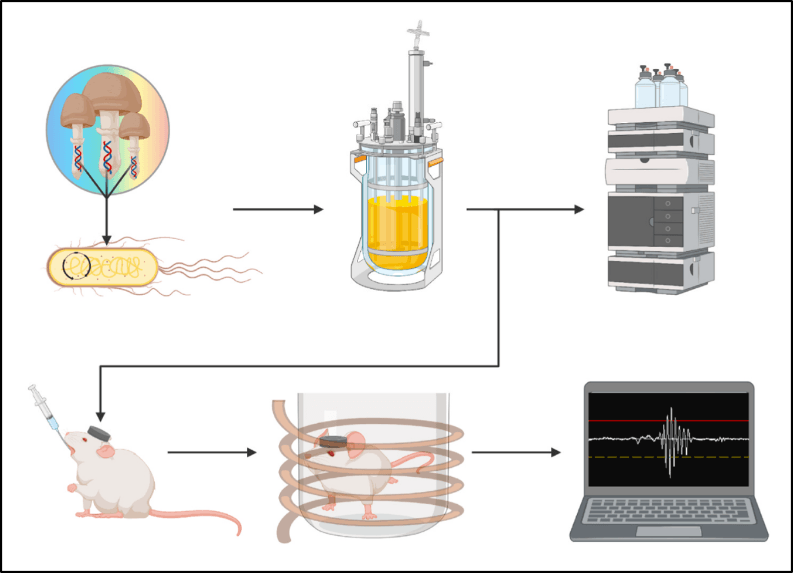 Figure 2: Overview of study methods from Adams et al. 2022. Genes encoding enzymes involved in norbaeocystin synthesis were expressed in E. coli. The biosynthesis of norbaeocystin was optimized in benchtop reactors, and then scaled up to produce large enough quantities to use in the rat head-twitch response (HTR) study. HTR was measured through a headset connected to a computer to record head twitches.

Whether it was mixed with broth or water, psilocybin generally increased the number of HTRs in rats in a dose-dependent manner. Norbaeocystin did not increase HTR in the same way, and there was no significant difference in HTR among the doses applied.

Adams and colleagues successfully developed a method for low-resource production of norbaeocystin, which will simplify future studies into its full pharmacological profile in isolation and in conjunction with psilocybin. Their findings on the dose-responsiveness of rodent HTR to psilocybin are similar to those found for synthetic and natural psilocybin,5,9 demonstrating that E. coli-derived psilocybin has a similar pharmacological profile to these other sources, and may be explored for use in clinical trials.

Tyler is a Ph.D. Candidate, honeybee researcher, and author of the psychedelic science newsletter The Tab.

Good write-up Tyler! You left me with a ton of questions. Could you please explain your reasoning for claiming “Their findings on the dose-responsiveness of rodent HTR to psilocybin are similar to those found for synthetic and natural psilocybin, demonstrating that E. coli-derived psilocybin has a similar pharmacological profile to these other sources, and may be explored for use in clinical trials.”? Based on the data I see, the HTR data does not align with previously reported figures using psilocybin and various analogs. For example, the max HTR using psilocybin was ~11/60 min whereas others report ~30/20 min (This is… Read more »

I am a corresponding author on this manuscript, so I figured I would chime in here. @Tyler Quigley – Thanks for the highlight. In the future, feel free to reach out via email for more discussion. @Cameron – You make some good points. It is important to remember that this is one of the first articles focusing on norbaeocystin, so we do not have all the answers. Re-HTR data: The HTR is different for different animals. Our study used rats, while the study you mention used mice. It is known that rats have a lower response than mice, but have… Read more »