Because of its potential utility in medical treatments, scientists have become increasingly interested in psilocybin and psilocin. Scientists would also benefit from investigating other psilocybin derivatives, such as baeocystin, norbaeocystin, and aeruginascin.

Structurally, the molecule aeruginascin resembles psilocybin and baeocystin. It differs by having three methyl groups (instead of one or two) on the ethylamine moiety.

Interestingly, aeruginascin’s chemical structure is also closely related to a compound in toad secretions (aka venom) called bufotenidine. Although bufotenidine lacks the phosphate group in position 4 (instead it has a hydroxide group on in position 5) it has three methyl groups on the ethylamine moiety as aeruginascin does. 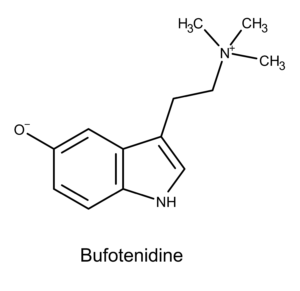 The Effects of Aeruginascin on Humans

Aeruginascin’s specific mode of action remains unstudied. In contrast to psilocybin and psilocin, ingesting aeruginascin appears to only produce euphoria as opposed to hallucinations.1

Because it is a quaternary amine, scientists hypothesize that aeruginascin cannot cross the blood-brain barrier, except when it is metabolically demethylated or when it is accompanied by a specific transporter.2 Penetrating the blood-brain barrier is important to generating the psychoactivity observed for the dimethylated analogs psilocybin and psilocin. One would expect similar logic to apply to aeruginascin.

Read a more in-depth discussion of aeruginascin in the PSR article The State of the Art of Aeruginascin – July 2019.