The complexity of nature as it relates to psychedelic drug research has been a frequent topic of Psychedelic Science Review articles. In the past, we have published articles on the variability of compounds in magic mushrooms as well as how environmental variables such as light and the type of growing medium influence the presence and amount of certain compounds (e.g., psilocybin derivatives) in the mushroom fruiting bodies. Other articles have delved into the mysteries surrounding the chemicals in magic mushroom spores and why spores have little to do with potency.

On October 16th, 2021 the natural psychedelic drug development company Filament Health shared some new mushroom composition data on Twitter. They measured the levels of psilocybin and psilocin in 20 individual Psilocybe cubensis mushrooms (strain “Blue Meanie”). The mushrooms were cultivated from a monoculture, analyzed at the same stage of maturity, and each specimen weighed about 0.5 grams. The data for each mushroom sample is shown in the table below, which is taken from Filament’s tweet. Overall, the company stated that they

…found psilocybin strength variability of over 5x in the same flush.

For natural psilocybin to be a therapeutic option, reducing variation via standardization is the only option. 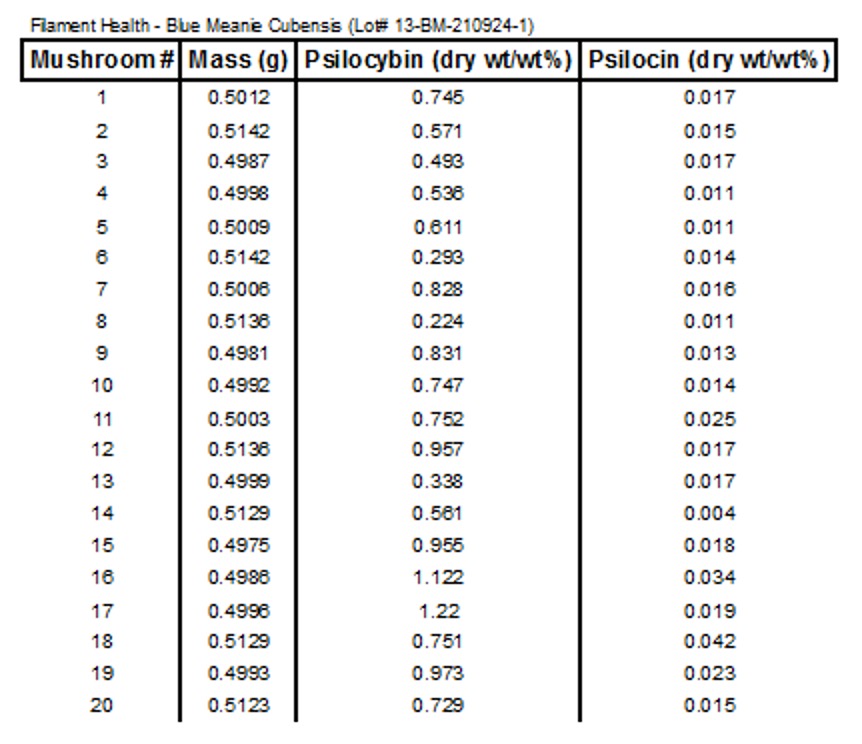 Filament said in the comments section of the tweet that these data are “part of a larger study that was designed to determine variability between mushroom fruiting bodies.” Psychedelic Science Review reached out to Filament’s Research and Development Director Ryan Moss for more information on this larger mushroom composition study. Mr. Moss said the research includes “studying the differences in metabolite content of various anatomical structures of the fungus (mycelium, sclerotia, stalks, caps, etc.). In the broader scope, the study will include comparisons of the metabolite content between individual mushroom fruiting bodies, stages of maturity, flushes, species, and varieties.”

Mr. Moss added the following regarding the compounds they are finding and studying, “While the small set of data that we shared via Twitter displays psilocybin and psilocin, we have isolated and tested for multiple compounds of interest in the mushroom including the tryptamine alkaloids: baeocystin, norbaeocystin, norpsilocin, aeruginascin, 4-HO-TMT, 4-hydroxytryptamine. The beta-carbolines: harmine, harmane, norharmane, harmol.”

Psychedelic Science Review frequently writes articles about the entourage effect, particularly when it comes to magic mushrooms. Mr. Moss made it clear that Filament is working to unearth more details surrounding this phenomenon. “Since psilocybin-containing mushrooms have traditionally been consumed in their raw, desiccated, whole-fruiting-body form, we think it is important to understand what people have been consuming historically, and the variability associated with that. With this information, we hope to be able to put the traditional-use of these substances into context, as well as explore the purported ‘entourage effect’ and how that can be applied to the therapeutic application of these natural products.”

Filament Health occupies an interesting space in psychedelic research right now. Their focus centers on discovering, extracting, and purifying magic mushroom compounds as opposed to synthesizing them or developing new derivatives of psychoactive compounds. These are some of the essential first steps towards fully understanding the ‘magic’ of magic mushrooms. Without first determining the chemical composition, researchers remain blind to what compounds are responsible for the biological properties, their mechanism of action, and their relative contributions to the observed effects.