Psilocybin mushrooms (aka magic mushrooms) contain several compounds besides psilocybin. One such compound, baeocystin, is a psilocybin analog that has received little research attention, until now.

In a February 2020 study published in the Journal of Natural Products, Sherwood et al. tested the bioactivity of baeocystin for the first time using two tests. These were the head twitch response (HTR) in mice and the Gq-mediated calcium flux at serotonin 5-HT2A receptor (5-HT2AR).1

Scientists know that activating the 5-HT2AR elicits the psychedelic effect in humans.2,3 The first definitive study indicating the involvement of 5-HT2AR was done by Vollenweider et al. in 1998.4

The HTR is a widely used behavioral model in rats and mice that scientists use to test for activation of the serotonin 5-HT2AR. In 1967, Corne and Pickering first recognized HTR as a possible predictor for hallucinogenic effects in humans.5

Decades later, researchers used 5-HT2AR knockout mice to study the HTR.6 This study found that several substances, including psilocybin, mescaline, and LSD, did not induce the HTR in these genetically engineered creatures. In other words, the study found that 5-HT2AR is responsible for HTR by using mice that did not have the 5-HT2AR.

Using these research tools, Sherwood et al. tested baeocystin to determine if it is a psychedelic compound.

Baeocystin and the Head Twitch Response

Sherwood et al. compared baeocystin to psilocybin using the HTR in mice.1 The results showed that psilocybin induced HTR in a dose-dependent manner. However, the effects of baeocystin on the mice were indistinguishable from those given saline as the control. The authors concluded that,

The researchers looked to similarities in the chemical structure and metabolism of psilocybin to explain this lack of activity. The dephosphorylation of psilocybin allows psilocin to cross the blood-brain barrier (BBB).7 From there, psilocin can interact with 5-HT2AR, causing the psychedelic effect. 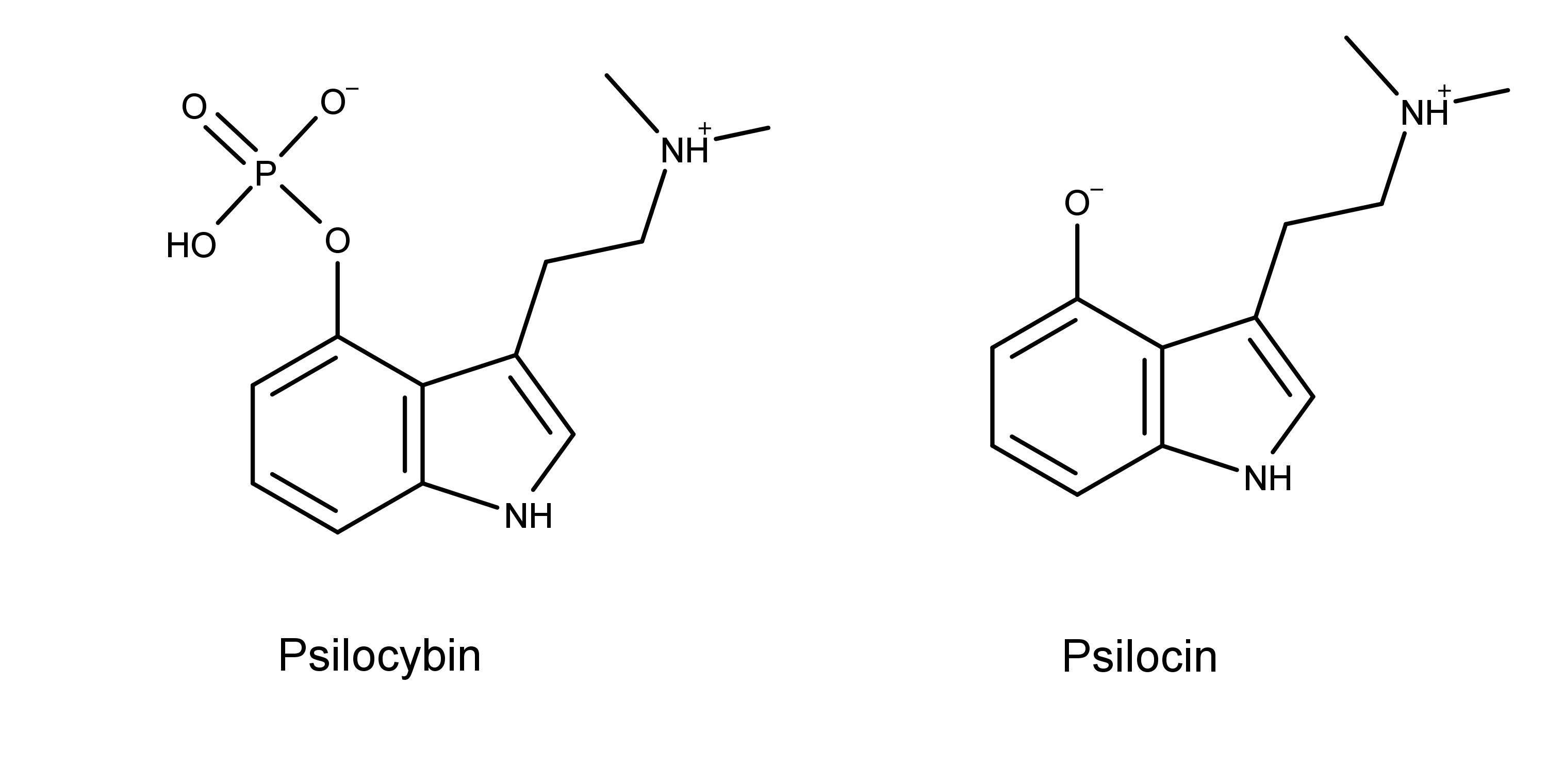 From this, they hypothesized that the reason baeocystin did not induce the HTR was that it couldn’t cross the BBB. 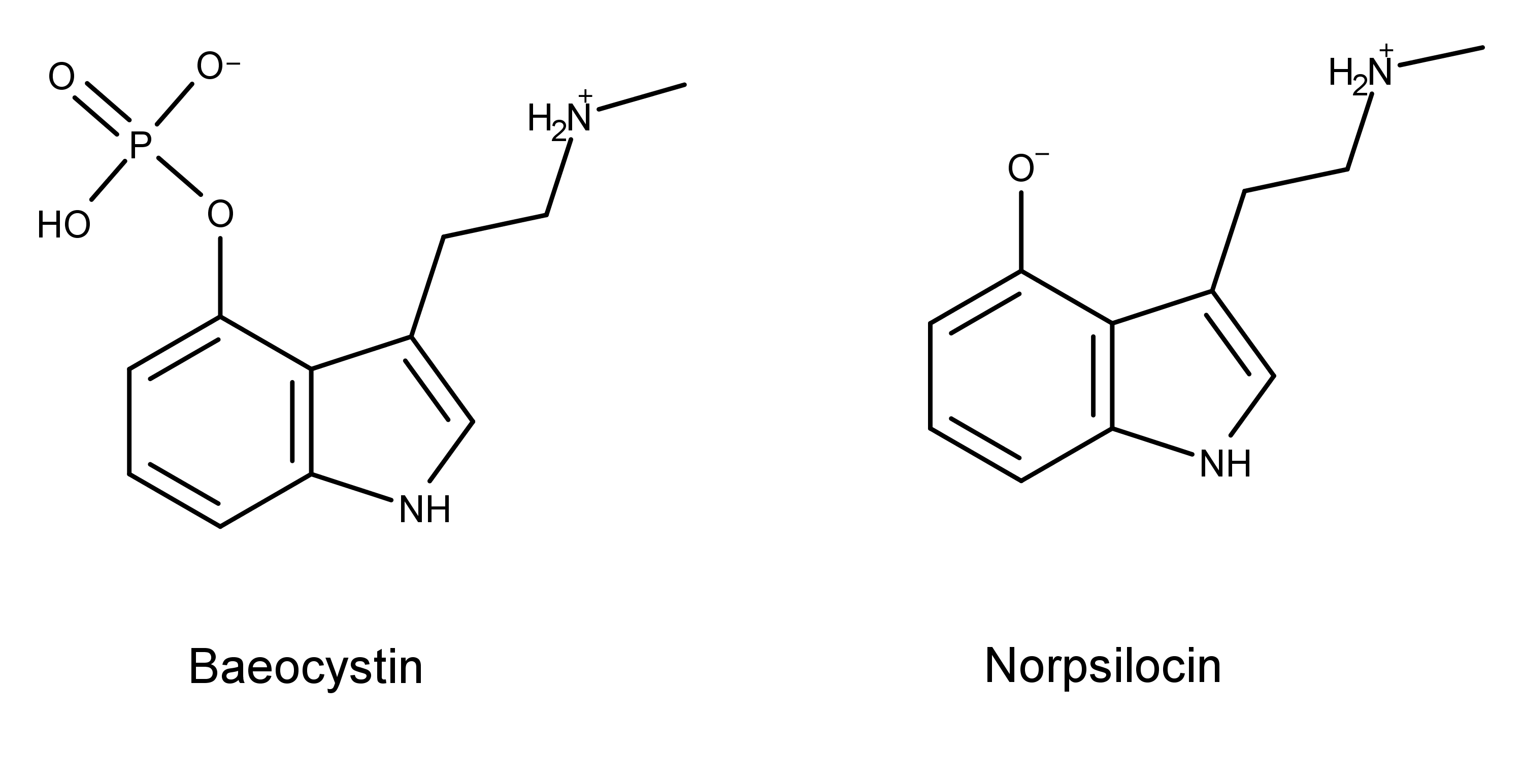 So, in their next step, Sherwood et al. tested baeocystin’s metabolite norpsilocin to see if it activated the serotonin 5-HT2AR. For this, they used a test that measures the Gq-mediated calcium flux at 5-HT2AR.

The 5-HT2AR is present in the membrane of many cell types, including neurons. Activation of 5-HT2AR causes cells to release calcium from their inner stores located in the endoplasmic reticulum, which then exits the cell.8,9 Scientists can quantify the activation of 5-HT2AR by measuring the calcium flux from the cells.

Additionally, the EC50 values (i.e., the potency) for norpsilocin and psilocin at the human 5-HT2AR were 8.4 nM and 4.3 nM, respectively. In this test, the lower the EC50, the greater the potency. Although norpsilocin’s EC50 was greater than that of psilocin, the difference (~ 4.0 nM) is considered negligible. Thus, the authors described the compounds as approximately equipotent. For the mouse 5-HT2AR, the EC50 = 19.0 nM for norpsilocin and 9.9 nM, for psilocin. The authors stated,

Therefore, it appears that baeocystin’s metabolite norpsilocin is capable of eliciting the psychedelic effect. If this is true, then why didn’t baeocystin cause HTR in mice?

Sherwood et al. attributed the lack of activity by norpsilocin in the HTR test to the action of monoamine oxidase enzymes (MAO). MAOs use oxygen atoms to remove amine groups from molecules. They noted that secondary amines tend to be broken down readily by MAOs compared to tertiary amines.10 Therefore, they hypothesized that norpsilocin (secondary amine) gets degraded faster in the body compared to psilocin (tertiary amine).

The authors summarized their findings as follows:

The in vivo data combined with assessment of the pharmacological liabilities suggest it is unlikely that baeocystin or its putative metabolite norpsilocin contribute significantly to centrally mediated psychedelic effects, likely due to rapid degradation by MAO or inability to cross the blood−brain barrier.

Why Are These Findings Important?

Although the HTR animal model suggests that baeocystin (or it’s metabolite, norpsilocin) was not psychedelic, the cellular assays demonstrated that norpsilocin acts as a potent agonist at human 5-HT2A receptors. The latter effect is traditionally correlated with a psychedelic effect.

These findings advance the scientific knowledge of some magic mushroom compounds. However, there is still a lot of work to do. The Sherwood et al. study answers some questions but poses more, including whether baeocystin acts as an allosteric modulator in the psychedelic effect.

Historically, psilocybin and psilocin receive all the attention in psychedelic research. This first of its kind study by Sherwood et al. brings baeocystin (and other magic mushroom compounds) into the light for further research.