In a June 2019 paper published in Acta Crystallographica, researchers unveiled a new crystalline form of psilacetin,1 a prodrug of psilocin (psilacetin is also known as O-acetylpsilocin and 4-AcO-DMT). This structure represents a new solvate of psilacetin which could provide new properties such as solubility and new opportunities for formulating drugs based on these properties.

This work comes at a time when psychedelic drugs like psilocybin and LSD are making headlines for their therapeutic effects in treating conditions such as anxiety, depression, and addiction. Psilacetin, the study authors point out, is easier and less expensive to synthesize than psilocybin. Therefore, this study lays the groundwork on a new path toward making psilocybin-assisted psychotherapy (PcbAP) cost-effective and available for people who will benefit from this type of medical treatment.

Figure 1 below shows the newest crystal structure of 4-AcO-DMT fumarate. The authors describe the structure as follows: 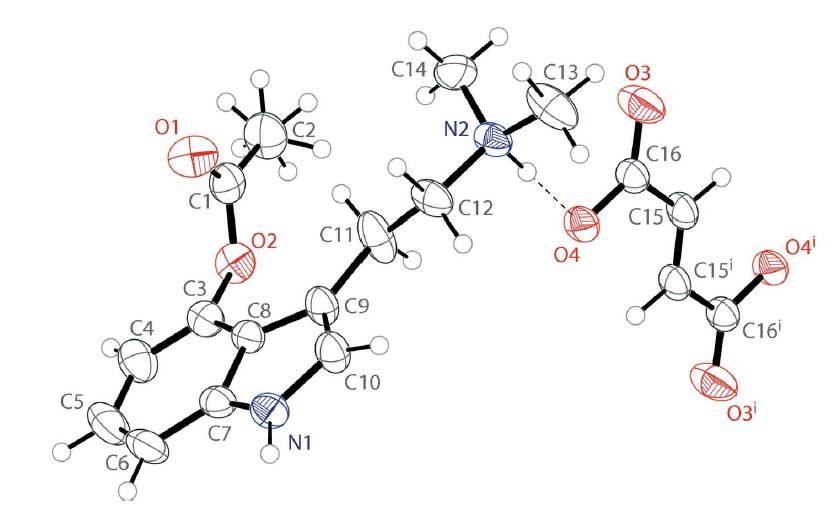 Psilacetin as a Prodrug of Psilocin

In 1963, Albert Hofmann and a team of researchers including Franz Troxler patented their discovery of 4-AcO-DMT along with other indole esters they had synthesized.4 It is interesting to note that in their patent, Hofmann and Troxler described indole acetate esters like 4-AcO-DMT as serotonin receptor antagonists. However, over the years, scientists have come to classify them as prodrugs that are inactive on their own by way of analogy to psilocybin.

The world-famous chemists Albert Hofmann and Alexander and Ann Shulgin have said that psilocin on its own is an unstable compound compared to psilocybin.5,6 This is because psilocin is more susceptible to oxidation due to the lack of the phosphate group that is present in psilocybin. The degradation of psilocin by oxidation is thought to produce the blue color often seen on psilocybin mushrooms that have been handled or damaged in some way.7

Another reason psilocybin lends itself more easily to manufacturing is that it is readily soluble in water whereas psilocin is not.5 Because of this and the instability of psilocin, manufacturing drugs containing the pure psilocin is not practical and likely not even feasible.  Administering a prodrug of psilocin is the logical route to follow for creating effective drug therapies. However, as mentioned earlier, of the two choices, psilacetin is less expensive and easier to synthesize.

Amid these exciting scientific discoveries is a phenomenon that is integrally tied to the overall effects of psychedelic drugs. Understanding it is critical for producing psychedelic drugs that are as efficient as possible and provide the best possible results for patients. This phenomenon is known as the entourage effect, and it first gained attention in the world of medical cannabis.

The entourage effect is also seen in the difference between the effects of ingesting psilacetin alone versus magic mushrooms. In general, psilacetin appears to give a more colorful experience and imparts more feelings of warmth, relaxation, and euphoria than psilocybin mushrooms. On the other hand, magic mushrooms elicit more emotions and more visuals than psilacetin. The Urban Dictionary sums up the different effects this way:

The effects are VERY similar to a mushroom trip, except it lasts a little longer than mushrooms (around 7 hours). Its effects, however, differ somewhat from mushrooms. It seems to have a much more relaxing quality to it, which makes it harder to have a bad trip. Several available reports of 4-ACO-DMT compare it favorably to psilocybin, describing it as more euphoric, gentle, warm, and colorful. It has also been described as less jarring/scary, and less likely to produce nausea.

The Importance of Crystal Structures

It is important to remember that small changes at the molecular level can translate into significant changes in effect when it comes to drugs. Therefore, working with compounds at the molecular level is essential for unraveling the mysteries of how drugs work and how other compounds affect them.  The new crystalline forms of psilacetin elucidated by these researchers could be used to modulate the effects of each compound in a drug formulation (the entourage effect just discussed). In addition, determining the crystal structures of compounds is essential to understanding their physical properties and for probing their activity at receptors (e.g., via modeling studies).

I love 4-AcO-DMT. For it’s easy to measure form, allowing a very specific and accurate dosing platform, making micro-dosing a very simple process. It is my go to Psychedelic for any dose size, micro to hero.