In the mushroom world, the genera Psilocybe is king in terms of name recognition and the attention it receives for its effects and therapeutic potential. Another mushroom known by the scientific name Amanita muscaria (aka fly agaric or fly amanita) has its own reputation as a fungal icon. But it has a bad connotation for some because it contains toxic compounds. This reputation has likely prevented scientists from searching for therapeutic compounds in this species. However, this may have resulted in a case of ‘throwing the baby out with the bathwater.’ Not the best way to garner attention, particularly from scientists searching for therapeutic compounds.

An alternative approach could investigate the molecules individually with an eye towards separating beneficial properties from the toxicity associated with whole mushroom extracts.

A. muscaria’s main claim to fame is that it embodies the concept of what a mushroom (or toadstool) looks like. Historically, it is the most widely used image for depicting the wild mushroom.1 Its image has been used for illustrating cartoons and children’s stories, as well as tattoos, Christmas tree decorations, and even pastries.1 One of its most famous illustrative uses is what appears to be an Amanita mushroom is in Lewis Carroll’s 1865 story “Alice in Wonderland” (Figure 1). 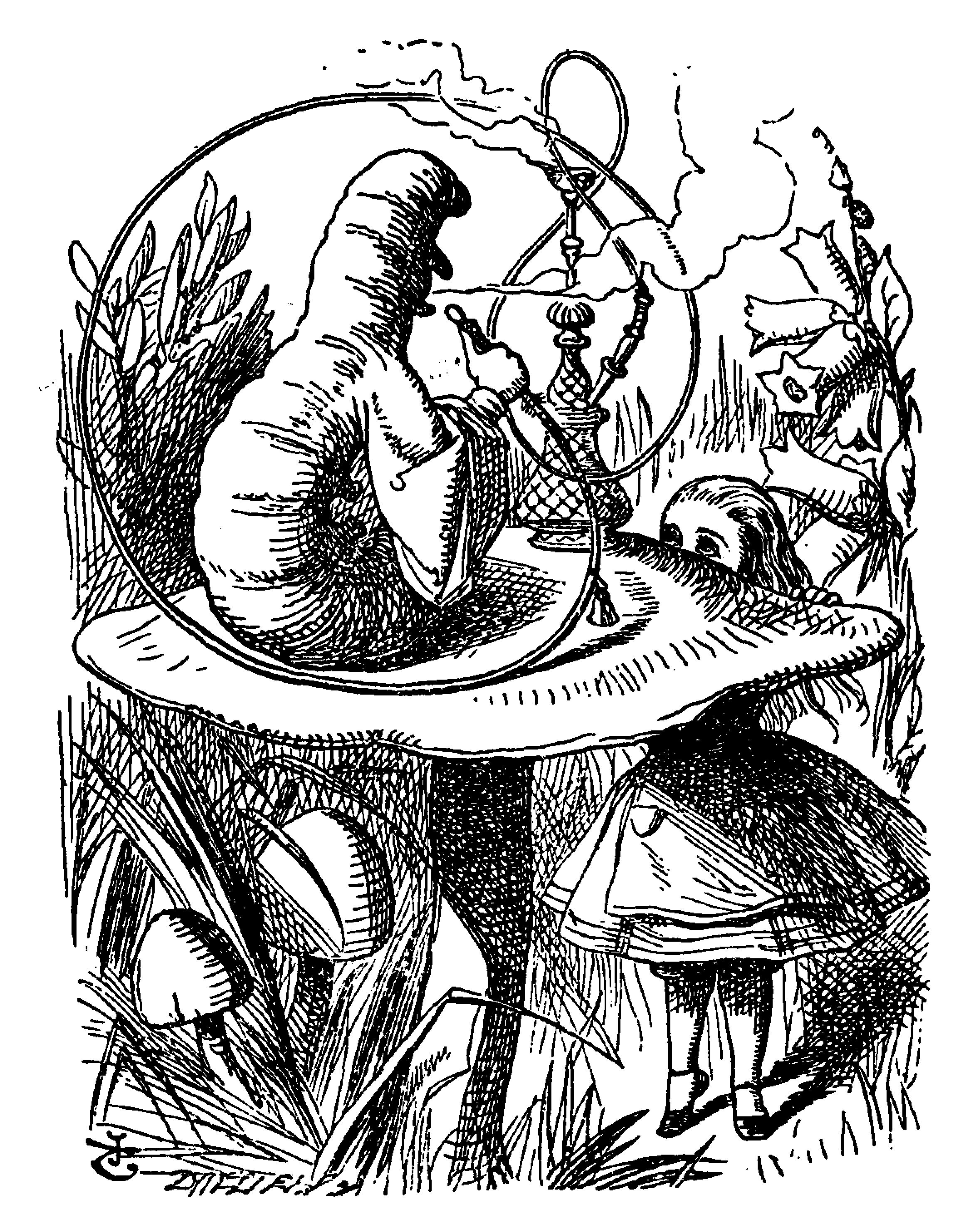 Figure 1: Original illustration by Sir John Tenniel from “Alice’s Adventures in Wonderland” showing the caterpillar smoking a hookah while sitting on what could be a large Amanita muscaria mushroom. The children’s story describes how Alice eats pieces of the mushroom and becomes taller and shorter. This could imply a sense of distortion of proportion brought on by the compounds in the mushroom.  Image from Medium.com.

Due to its recognizable red and white colors and psychoactive properties, among other features, A. muscaria has become a part of magic, culture, and folklore all over the world. Michelot and Melendez-Howell summarized this well by saying, “Shamans, sorcerers, and witches made use of it, all classes of officiating ‘priests’ in different ethnic groups which are geographically and culturally distant.”1

Biology and Characteristics of A. muscaria

A 2006 DNA study by Geml et al. suggested that the ancestors of A. muscaria originated in the Siberian-Beringian region.2 Currently, it is found in the Northern Hemisphere but has also been introduced in New Zealand, Australia, South America, and South Africa. It is commonly found in the company of birch, pine, spruce, and fir trees.

Arguably, the most recognizable species of A. muscaria has a large red cap with an abundance of white nodules or “warts” or “fleck” (see the featured image at the beginning of this article). The vivid red color of the cap is produced by a compound called muscarufin3 (Figure 2). However, there are variations of the species that display other colors like an orange or melon-colored cap with tannish or yellow nodules.2,4 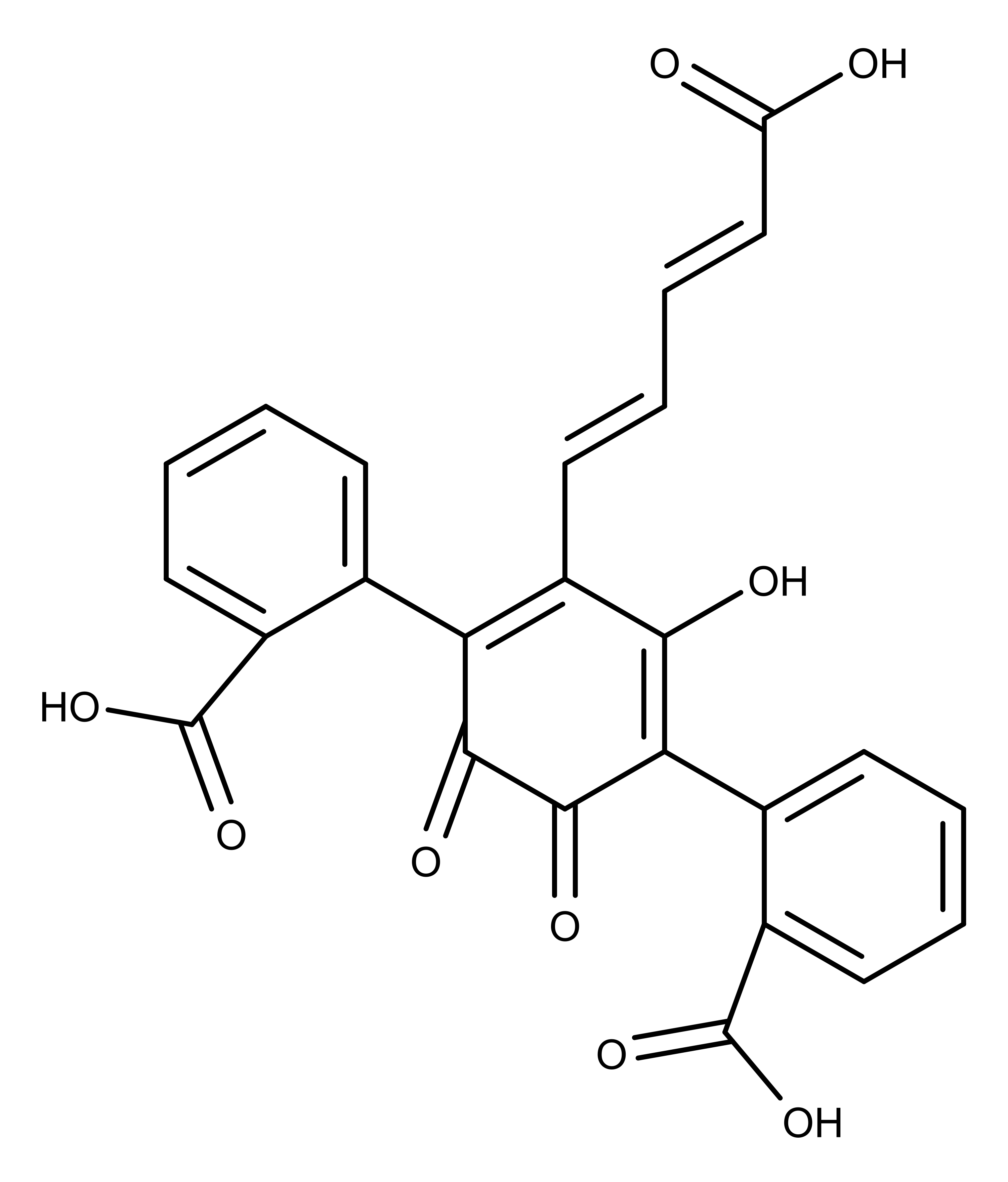 Figure 2: The chemical structure of muscarufin, the compound in Amanita muscaria that gives its cap the vivid red color.

Muscimol and ibotenic acid are the primary toxic compounds in A. muscaria1,5–7 (Figure 3). Interestingly, one of the first practical uses of A. muscaria was as an insecticide; hence its other names, fly agaric and fly amanita.8

Figure 3: The chemical structures of muscimol and ibotenic acid, which are the primary toxic compounds in Amanita muscaria. Ibotenic acid is a neurotoxin and a prodrug of muscimol.

According to a 2008 article by Merová et al., although it contains poisons, the intoxication brought on by A. muscaria is rarely lethal.9 However, the authors stress that it is important to identify ingestion of the species so medical treatment can be initiated quickly.

A review of three case studies of children who ingested A. muscaria described severe symptoms in two of them.10 The authors summarized, “Although Amanita muscaria normally presents relatively a low degree of toxicity among the Amanitas, occasional severe courses are observed and each incident needs appropriate attention as the course might become severe, even if initial symptoms are absent.”

Other toxic compounds in A. muscaria include muscarine and muscazone (Figure 4).11 A 2017 review paper by Patočka and Kocandrlová discusses other compounds in the mushroom including stizolobinic acid, muscaflavin, and muscapurpurin (Figure 5).12

Figure 5: Click to enlarge. The chemical structures of some of the other compounds found in the mushroom Amanita muscaria.

The Pharmacology of Some Amanita muscaria Compounds

Muscimol and ibotenic acid are derivatives of the neurotransmitters gamma-aminobutyric acid (GABA) and glutamic acid, respectively (Figure 6).1 As such, these chemicals from A. muscaria activate the same receptors as the endogenous compounds. Ibotenic acid is a neurotoxin and a prodrug of muscimol.13 A 1992 study by Zinkand et al. found that the neurotoxicity of ibotenic acid comes from its activation of the N-methyl-D-aspartate (NMDA) receptors.14

Muscimol works as a potent agonist of GABAA receptors in the brain.15 Activation of GABAA causes an inhibitory effect, meaning it reduces the transmission of neuronal signals. For reasons like this, GABA receptors and their transport mechanisms are used as targets for drug development.16 Interestingly, in 2020, Kupka et al. determined that the zwitterion form of muscimol was most favored in water.17

In 1976, Jonathan Ott reported an LD50 in rats of 4.5 mg/kg for muscimol when administered intravenously.18 The oral gavage LD50 was 45 mg/kg. More recently, Stebelska found that about 6 mg of muscimol or 30 to 60 mg of ibotenic acid administered orally caused psychedelic effects.19 According to Psychonaut Wiki, these effects can include hallucinations, visual distortions and enhancements, dissociation, and cognitive euphoria.20 They also noted that one A. muscaria mushroom weighing 50-70 grams could have up to 70 mg of ibotenic acid (imagine the difficulty of properly dosing these mushrooms with this kind of chemical variability).

In 2018, Moss and Hendrickson reviewed 34 cases of people who ingested mushrooms containing ibotenic acid and muscimol, 23 of which involved A. muscaria.21 The data fell into three groups: accidental ingestion by children, recreational adult ingestion, and ingestion due to foraging errors. Overall, they reported that people ingesting mushrooms containing these two compounds experienced “gastrointestinal symptoms, central nervous system depression, and central nervous system excitation with the severity of effects between the different groups likely due to some dose-response relationship.”

The Applications of Amanita muscaria Compounds

Ibotenic acid is used to create experimental brain lesions in rodents.22,23 Another application is for creating a rodent model for studying Alzheimer’s disease.24 Rats injected with ibotenic acid show a loss of neurons via the hippocampal performant pathway. These neuronal losses resemble the brain defects seen in Alzheimer’s disease.

In 1978, Tamminga et al. suggested that muscimol may be a therapeutic treatment for schizophrenia.25 In clinical studies, muscimol has been shown to have a variety of effects including analgesic, antispastic, anxiolytic, and a muscle relaxant (see review in Krogsgaard-Larsen et al. 1985).26 In 2018, Pilipenko et al. found that very low doses of muscimol “exerted memory-enhancing and anti-inflammatory effects, as well as normalization of acetylcholine esterase and GABA expression.”27

Protecting the Mushrooms and Their Environment

Studying the possible beneficial effects of toxic organisms is challenging. Scientists should proceed with caution, but not just in the laboratory, but in the natural world, too. For example, the psychedelic writer, documentarian, and psychonaut Hamilton Morris has recently noted the problems that the toad Bufo alvarius and its habitat are experiencing because of people disturbing and capturing them to harvest their psychoactive venom which contains 5-MeO-DMT.

Should researchers find that compounds in A. muscaria have beneficial, even therapeutic effects, great care should be taken to ensure the mushrooms are not exploited. The responsible and sustainable investigation into toads, mushrooms, and other living organisms is essential for respecting nature while advancing scientific knowledge.

Next Research Steps for A. muscaria

As discussed above, research into A. muscaria mushrooms has focused largely on either the mushroom fruiting bodies or single, specific molecules. Scientists are exploring the possibility of an entourage effect with the compounds in magic (psilocybin) mushrooms. So, it makes sense to approach A. muscaria in the same way, i.e., studying the pharmacology of precise combinations of compounds found within the mushroom fruiting bodies.

But finding and characterizing all the compounds (even “minor” ones) in A. muscaria fruiting bodies is an essential first step. Once that happens, further research could clarify whether A. muscaria mushroom compositions could be formulated to preserve (or optimize) their therapeutic properties while reducing (or eliminating) unwanted side effects.  Until then, this organism remains a fascinating area of research and source of untapped potential for pharmaceutical development.

The next step might be happening right now! I just saw that Psyched Wellness is developing their “key proprietary extract, Amanita Muscaria (AME-1)”. From their press release, they are focused on “determining a safe dose of AME-1 for human consumption” with hopes of bringing their “Amanita-based CPG products to market.” It wasn’t clear from the article if they are pursuing precise combinations of specific compounds or simply using full-spectrum extracts. Either way, it’ll be super interesting to learn more about that research.