Ibogaine has shown promising anti-addictive effects in both animal models and human trials, aiding those in search of a novel treatment for addiction and the compulsive behaviors that accompany it. One study found that 91.7% of opioid or cocaine-dependent participants felt ibogaine was useful in addressing substance abuse issues.1 Despite ibogaine’s demonstrated efficaciousness and mainstream acclaim, literature regarding its potential to induce potentially fatal heart arrhythmias and case reports on ibogaine-associated fatalities are accumulating as its pharmacology is further studied.

The Popularization of Ibogaine Treatment

The use of ibogaine in the West, and particularly as a remedy for substance addiction, was spearheaded by Howard Lotsof in the early 1960s. Lotsof was then a teenager struggling with a heroin addiction, discovering serendipitously after his self-experimentation with ibogaine that he had no desire to use heroin. In addition, he experienced no physical withdrawal symptoms upon cessation. Lotsof would go on to publish many research papers regarding ibogaine’s utility as a remedy for addiction and was awarded many patents over the years for the treatment of numerous specific substance dependencies using ibogaine. He remained an active voice on the issue for decades, serving as a patient advocate for those suffering from addiction and penning the Ibogaine Patients’ Bill of Rights, defining the rights given to ibogaine patients and their own responsibilities upon admission and intake into an ibogaine therapy program.2 The Bill of Rights has aided in keeping patients safe and ensuring their satisfaction during treatment.

While ibogaine has been studied with relative fervor for several decades, the opioid crisis and its implications have brought it to center stage. As addiction and its consequences continue to greatly impact peoples’ lives, ibogaine has been viewed by many as a lost hope and a reputable antidote. According to data obtained by the Center for Disease Control (CDC), a record high of 93,331 overdose deaths occurred in 2020 amid the COVID-19 surge, 20,000 deaths greater than in the previous year. The CDC noted that this was the largest single-year increase recorded since 1993.3 A great deal of literature has noted ibogaine’s growing visibility within the media and its popularity as a sought-after remedy for addiction, particularly in the context of opioids and opiates. While a general interest arose concurrently with an increase in opioid consumption in the 1990s, public interest in ibogaine has reached its zenith alongside other, more traditional psychedelics.4

As ibogaine’s pharmacology has been further studied, research has accumulated that it has the propensity to cause cardiac arrhythmia by blocking hERG potassium channels in the heart. These channels are essential for normal electrical activity within the heart and for proper coordination of the heartbeat. Ibogaine has been shown to reduce outward potassium flow through the hERG channels, which is important as myocardial cells in the heart reach a phase in the cardiac cycle called repolarization. As in neurons, depolarization involves a steep increase in membrane potential, sending an electrical potential throughout the heart that facilitates its contraction. Afterward, a repolarization phase occurs, returning the membrane to its negative resting potential. The outward flow of positively charged potassium ions through hERG channels aids in the repolarization process.

Ibogaine’s potential to inhibit the potassium current through the channel is concentration-dependent and may result in abnormal electrical activity, causing cardiac arrhythmia and/or sudden cardiac death.5 Researchers note that blood plasma levels occur in low micromolar ranges after treatment with 500-1,000 milligrams of ibogaine, doses typically used in treating addiction. This finding was associated with another case report of abnormal electrical activity in the heart upon ibogaine intake, evidenced by electrocardiogram (ECG), called long QT.6 Long QT syndrome, in which the repolarization of the heart following a full heartbeat is prolonged, can result in a rapid, irregular heartbeat, cardiac arrest, and sudden death. An example of long QT on an ECG is shown below (Figure 1, c).

Recent research has illustrated that the long-lived, active metabolite of ibogaine, noribogaine, also inhibits hERG channels. This research implies that noribogaine may be the major proarrhythmic compound, and not ibogaine itself.7 Indeed a number of cardiac-related fatalities in vulnerable individuals have occurred following the ingestion of ibogaine.8 A considerable portion of these deaths most commonly took place several days post-ingestion, or upon the use of very small doses.9 The literature notes that this warrants the development of ibogaine derivatives less liable to block hERG channels while retaining ibogaine’s anti-addictive properties.5 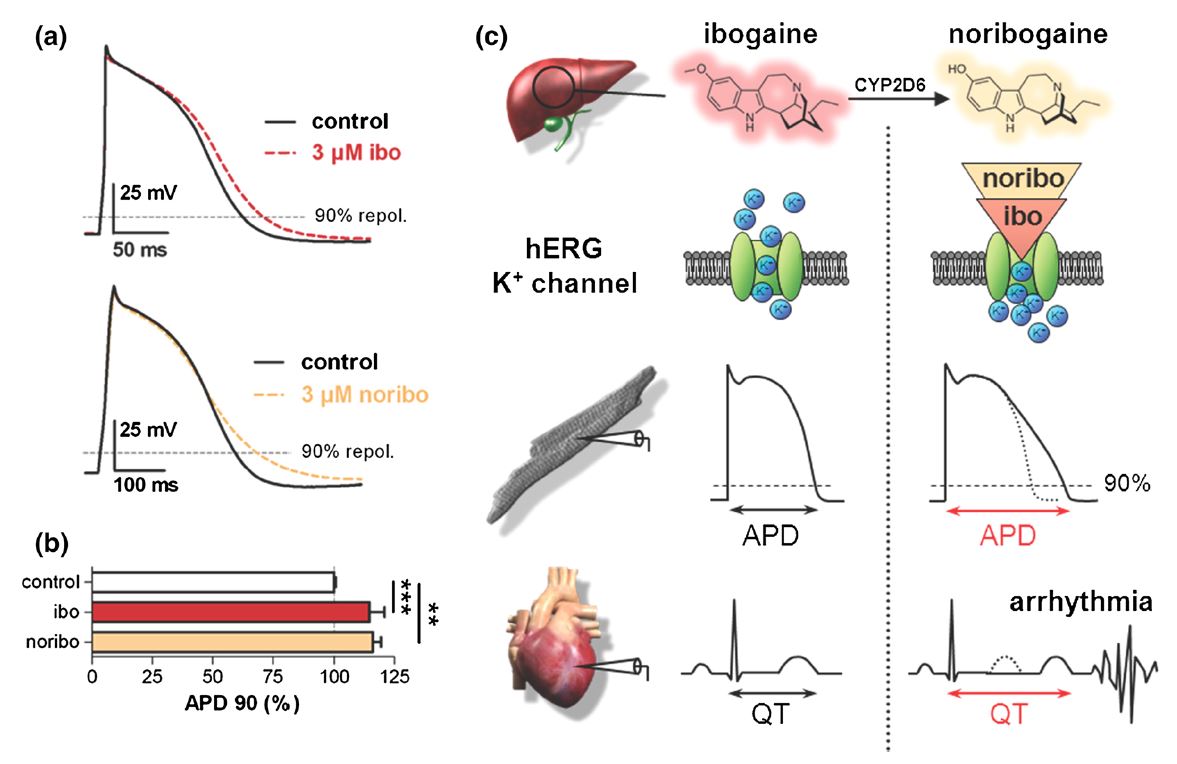 Figure 1: Both ibogaine and noribogaine impair the heart’s electrical activity. a) Action potential (AP) recordings from human cardiomyocytes under control conditions and upon exposure to a 3 µM solution of ibogaine (ibo, top) or noribogaine (noribo, bottom). b. Analysis of the dampening of AP repolarization by ibogaine and noribogaine. APD, or AP duration, in milliseconds, was greater in cardiomyocytes exposed to a 3 µM ibogaine or noribogaine solution as compared to a control. This further demonstrates the prolonged AP caused by ibogaine or noribogaine exposure. c. The proposed mechanism for cardiac arrhythmia following ibogaine intake. The figure depicts the sequence of events at the level of the ion channel, cell, and organ. Both ibogaine and its metabolite noribogaine (yielded by CYP2D6 enzymes in the liver) block hERG potassium channels. This slows the repolarization phase of the ventricular AP, prolonging the QT interval and causing cardiac arrhythmias to precipitate. From Rubi, et al., 2017.10

Numerous ibogaine derivatives have been synthesized, with 18-methoxycoronaridine (18-MC) demonstrating a promising efficacy in treating a wide range of compulsive behaviors. In rodent models, treatment with 18-MC reduced self-administration of morphine, cocaine, methamphetamine, nicotine, and even sucrose.11 18-MC has also been shown to reduce food intake in obese rats, likely due to its effects on dopamine release in the brain’s nucleus accumbens, the reward center thought to be mutually involved in addiction and compulsive eating.12 18-MC also inhibits hERG channels, but to a lesser extent than ibogaine or noribogaine. This likely makes it a safer lead compound to develop ibogaine derivatives from, with less concern of cardiotoxicity.5,13

Many commercially successful pharmaceuticals have been discontinued due to their propensity for disrupting hERG channels and causing arrhythmia or sudden death, lending these findings particular significance. The hERG channel is an “anti-target”, a site where off-target binding of drugs or their metabolites may have serious consequences.14 A pharmacophore of 18-MC derivatives have also been synthesized, many exhibiting greater efficacy than 18-MC itself, namely the methoxyethyl congener ME-18-MC.15 ME-18-MC has demonstrated anti-addictive properties, but with greater potencies by weight and at a quantity half of 18-MC’s minimum effective dose.16

Long since Howard Lotsof’s pioneering self-experimentation, we’ve learned a great deal about ibogaine and its anti-addictive properties. With this knowledge has come the understanding that ibogaine has pharmacological problems of its own, namely its propensity to induce cardiac arrhythmia and potentially cause sudden death by blocking hERG potassium channels, important in regulating the heart’s electrical activity and rhythm. The development of ibogaine derivatives, including 18-MC and its own derivatives such as ME-18-MC, may provide an answer to the possible safety issues ibogaine may present. These derivatives allow for the anti-addictive properties of ibogaine to be maintained, while the affinity for hERG channels and the potential for complications related to cardiotoxicity are reduced. This serves to ensure safer access to what many consider an important compound for the treatment of addiction and compulsive behaviors.

More articles about Side Effects 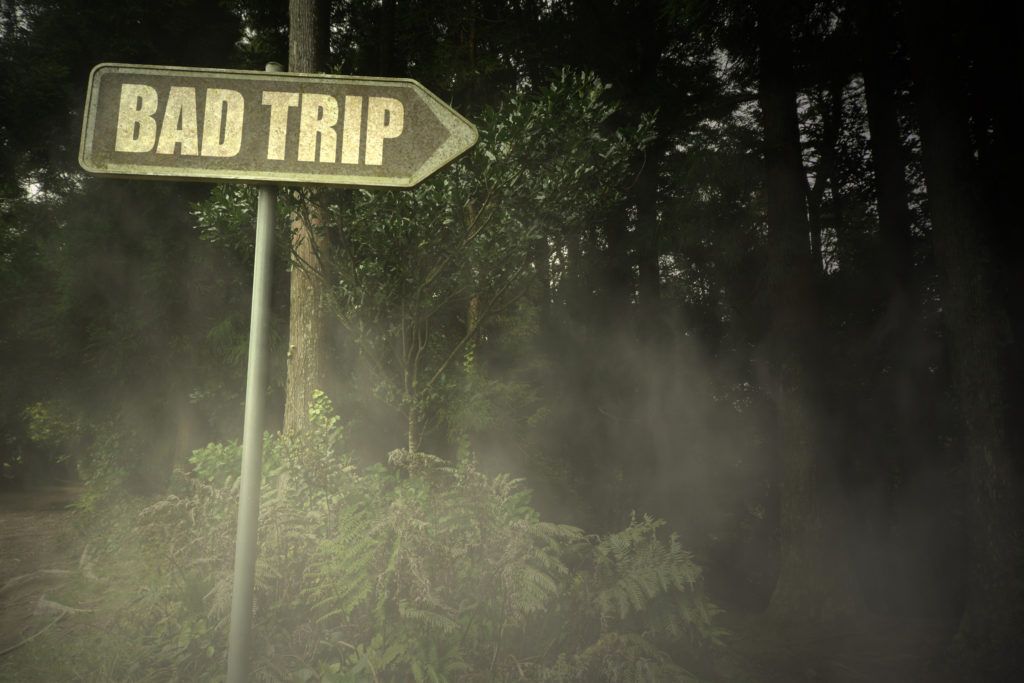 How Likely Are Bad Trips and Flashbacks from LSD?