The phrase “psychedelic renaissance” has begun to make an appearance in both mainstream and scientific media sources. This phrase is usually used in reference to the resurgence of medical research into psychedelics. Arguably, the compound receiving the most media attention at present is psilocybin.  The growing trend in the number of academic papers published per year discussing psilocybin demonstrates that “psychedelic renaissance” is an apt term (see Figure 1). The future of medicinal psilocybin appears to be bright and full of promise; but what about the lesser-discussed aspect of the drug: the recreational use of psilocybin? 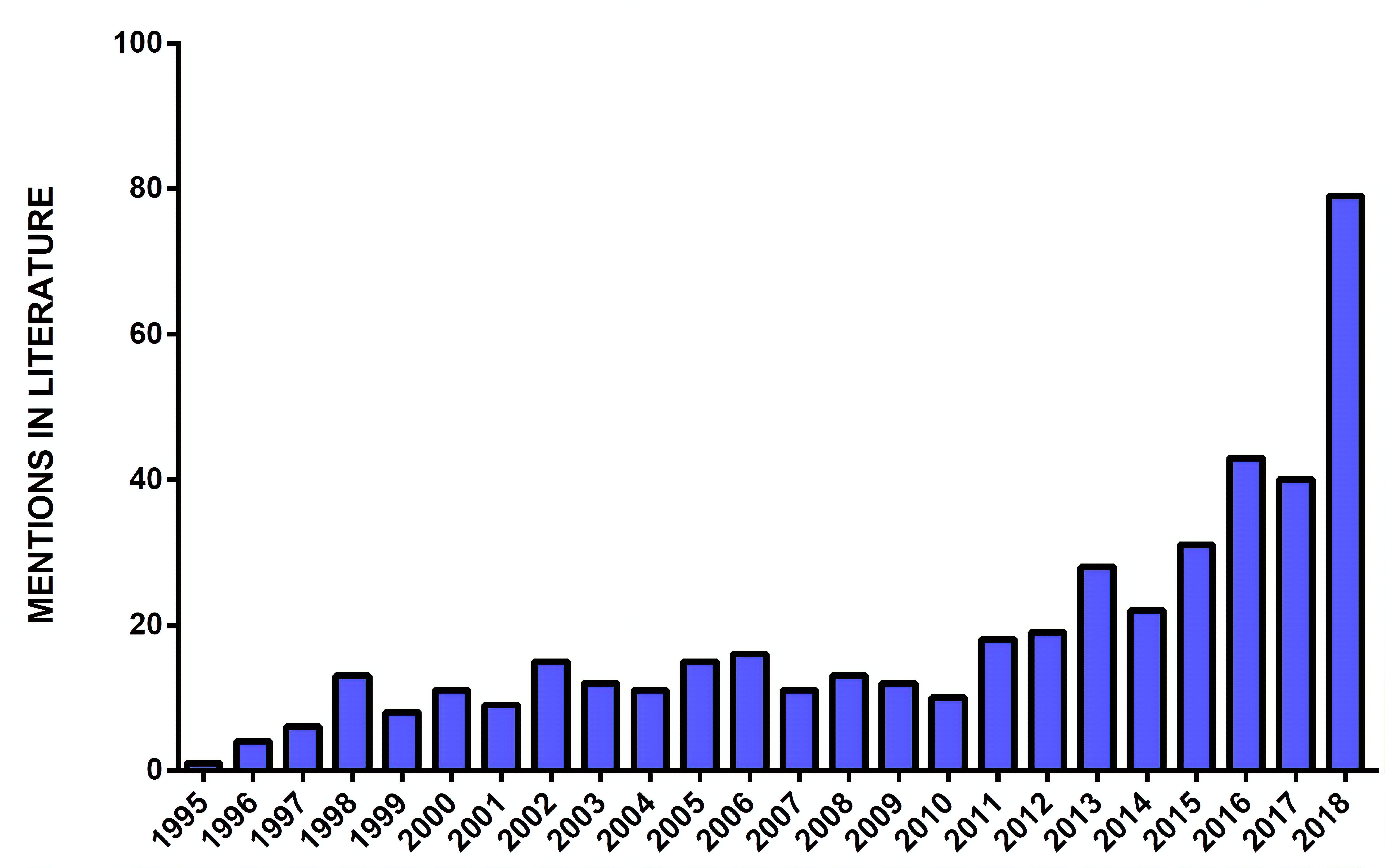 Figure I: Representation of the number of published papers per year discussing psilocybin. The data was obtained from PubMed’s database using the search “psilocybin” from year to date December 2018.

Recreational Origins in the Western World

Gordon Wasson, an amateur mycologist and banker, was the person responsible for introducing magic mushrooms to a broader western audience. He and his wife, Valentina Pavlovna Guercken, visited the Mazatec people who reside in the state of Oaxaca, Mexico in 1955. The Mazatec had been using the psilocybin-containing mushrooms for ceremonial and religious purposes for generations. Following the visit, Wasson published an article in Life magazine titled “Seeking the Magic Mushroom”.  The article’s publication led to an influx of “psychedelic tourists” to the region. Among these tourist were notable figures of the hippie-counter of the sixties, such as Bob Dylan, Mick Jagger and psychedelic researcher/vocal proponent, Timothy Leary. Psychedelic drugs became deeply intertwined with the zeitgeist of the hippie-counter culture, and their influence permeated the pop culture of the period, both in the form of music (Jimi Hendrix, the Beatles) and film (Easy Rider).

Attitudes towards psilocybin changed dramatically at the beginning of the nineteen seventies. Then US president Richard Nixon introduced the Controlled Substances Act in 1970, which listed psilocybin as a Schedule 1 drug. This method of classification ranks drugs into five categories based on two main criteria; the potential a drug has to be abused and the accepted medical use of the drug (see Table 1). Psilocybin remains a Schedule 1 drug in the US to this day, but there are talks of a possible rescheduling of the drug to Schedule 4. This would place psilocybin the same category as medications such as Xanax and Ambien.

The state of Oregon will take this change in attitude a step further and hold a vote in 2020 to allowed licensed production and administration of psilocybin by therapists, while reducing some penalties for unlawful psilocybin production, e.g. cultivating psilocybin (“magic”) mushrooms. The proposed change in legislation stems from recent findings demonstrating the therapeutic effect of psilocybin in conditions such as depression.1 While the sale of psilocybin-containing magic mushrooms will remain illegal, the proposed legislation represents an important shift toward outright decriminalization. Decriminalization is usually the first stepping stone to legalization, if the precedent set by cannabis is anything to base predictions on. Legalization of psilocybin would most likely result in the rapid growth of a recreational market.

It is difficult at the time of writing this article to find figures specific to the predicted growth of this market, so the recreational cannabis market is used as a template as it has faced similar regulatory hurdles and negative public perceptions prior to legalization.

If the sale of psilocybin for recreational purposes partially emulates that of marijuana, the potential market would be enormous.

There are a select few countries that allow for the possession, cultivation, and sale of psilocybin products, such as the Netherlands. Though the Dutch government technically banned the sale of magic mushrooms in 2008, a strange legal loophole permits the sale of psilocybin-containing sclerotic (more commonly known as ‘truffles’). Sclerotia is also a fungus, denser in consistency than its mushroom counterpart. Truffles are sold over the counter in retail units referred to as ‘smart shops.’ But the recreational psilocybin market in the Netherlands extends beyond the doors of the smart shop.

Amsterdam is home to a plethora of companies offering psychedelic retreats. Retreats offer participants “breakthroughs in your self-understanding to live a more meaningful, purpose-driven life.” Interestingly, some providers work on a pay-what-you-can based system, stratifying fees into categories for low, middle and high-income participants. The retreats are rarely conducted by trained psychotherapist/psychiatrists and don’t claim to be a replacement for psychotherapy/medication. Rather, the retreats are marketed more as a spiritual getaway, akin to a meditation or yoga retreat.

Countries such as Mexico have more ambiguous laws regarding psilocybin. The possession, cultivation, and sale of psilocybin are technically prohibited, although an exception is made for the native peoples of Mexico that use the fungus as a ceremonial tool. This has led to the emergence of psilocybin tours in sites such as the ancient ruins of Palenque. Travelers can opt for expensive luxury packages, with prices starting from $1400 per person. Luxury packages include flights to Mexico, luxury accommodation, food and a guided tour through the jungle with a Mayan guide. Alternatively, for those on a more modest budget, guides can be hired directly from the sites for a fee as low as $30.

At present, psychedelic researchers and the greater psychedelic community are focusing their efforts on identifying the therapeutic benefits of psilocybin, and rightly so. But one must not overlook the great potential of the recreational market. The examples given in this article shine a light on the prospect of ‘psychedelic tourism’ based on templates provided by countries around the globe and also alludes to untapped markets.

Whatever the future holds for the recreational use of psilocybin, it is apparent that Western perceptions of the drug are changing rapidly. The negative image associated with psilocybin, endowed by the politically charged Controlled Substances Act, is beginning to recede, allowing for an objective and data-driven discussion based around hard pharmacological evidence.

I think it’s pretty well established that when you put the most time and effort into a psychedelic experience, preparing the mind, setting intentions, carefully designing the set and setting (location, music, etc) that is when you get the most out of the experience. Having trained guides to help make all that happen properly, as in the Oregon model, sounds great. A free for all recreational model might not be such a great idea? I think that’s how psychedelics ended up getting banned in the U.S. in the first place. I would not look forward to people disrespecting this drug,… Read more »