The advancements in Artificial Intelligence (AI) have found applications in several areas such as natural language processing, speech recognition, and computer vision. AI is now rapidly spreading into areas that require substantial domain expertise such as chemistry, promising to expedite, improve the success rates, and reduce the cost of drug discovery and drug development.

The use of AI in drug discovery is gaining traction (Fig 1), with startups such as Entheogenix Biosciences Inc leveraging these technologies to develop new molecules from psychoactive seed Small Molecule Compounds (SMCs) to tackle unmet medical needs in mental healthcare. But before delving into the application of AI in psychedelic compound synthesis, it is crucial to contextualize the current landscape of drug discovery. Namely, the stagnation of the drug discovery process and the window of opportunity for AI intervention. 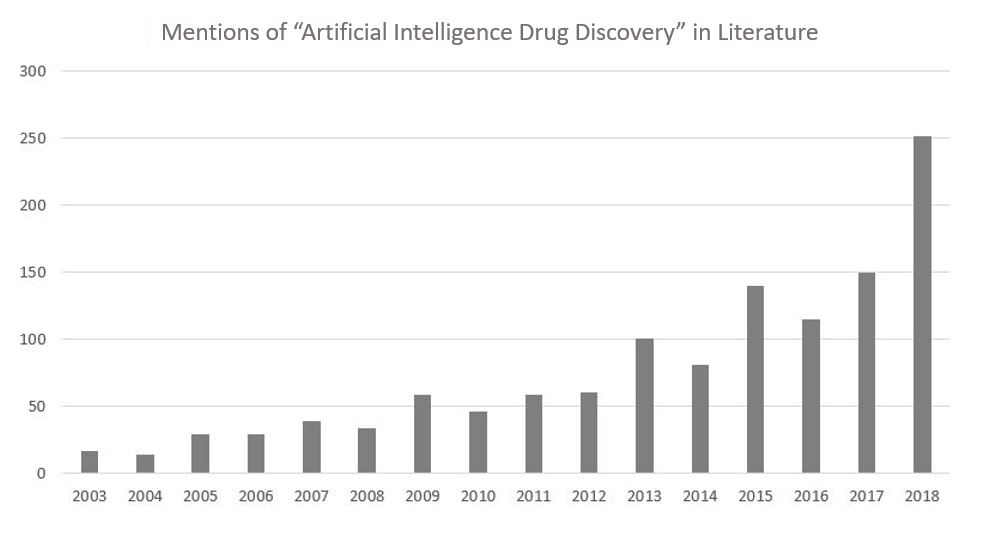 FIG I. REPRESENTATION OF THE NUMBER OF PUBLISHED PAPERS PER YEAR DISCUSSING AI AND DRUG DISCOVERY. THE DATA WAS OBTAINED FROM PUBMED’S DATABASE USING THE SEARCH “Artificial Intelligence” AND “DRUG DISCOVERY” FROM YEAR TO DATE DECEMBER 2018.

Pharmaceutical drug discovery has been undergoing somewhat of a crisis. The number of new drugs approved per billion US dollars spent on research and development (R&D) has halved roughly every nine years since 1950. This is a phenomenon referred to as Eroom’s Law (Fig 2). Observant readers may already notice that the name of the law bears special meaning (all will be revealed later in this article.) This finding outlines the sustained reduction in pharmaceutical R&D efficiency.

Although the quantity of new drugs that gain market approval is approximately constant in time, R&D expenditures have been rising considerably.  The costs associated with bringing a drug to the market are projected to increase to unsustainable levels over the coming years if this trend continues.

Outside of the obvious hurdle of the complexity of biological systems, Scannell et al. describe some of the potential underlying causes of Eroom’s Law.1

The ‘basic research–brute force’ bias is the inclination to overvalue the capacity of improvements in basic research and brute force screening methods (prominent in the initial step of the conventional discovery and preclinical research process) in the drug discovery process. One of the staple tools in drug discovery is High-Throughput Screening (HTS), which, according to Scannel et al. is a brute-force method. HTS uses automated robotics and microfluidics, allowing researchers to test libraries of hundreds of thousands of molecules in millions of different assays. Although HTS has been instrumental in the identification of many blockbuster drugs, it still reflects a ‘needle in a haystack’ approach to drug discovery.

However, there is hope. The recent application of machine learning algorithms to the drug development process may bring some order to the chaos.

The field of computer science – and subfield of AI – are at present the antithesis to the field of drug development. Computer science is said to adhere to Moore’s Law (Fig 2). Eroom’s Law is a palindrome of Moore’s Law in both name and nature. Moore’s Law relates to Gordon Moore’s observation that the amount of transistors on a microchip doubles every two years, though the cost of computers is halved. Moore’s Law states that society can expect the speed and capacity of computers to improve every couple of years, while price concurrently decreases. 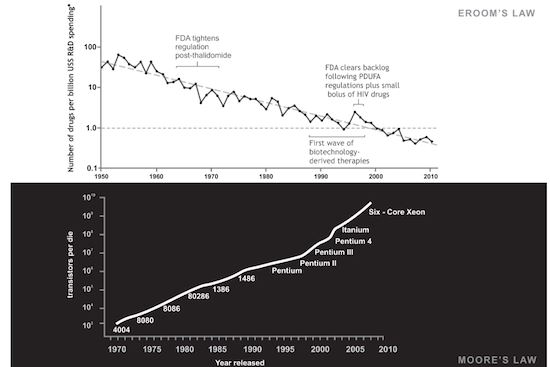 Increases in computing power due to improved hardware, alongside the development of more sophisticated machine learning algorithms, provide a set of tools that can improve discovery and decision making for well-specified questions with sufficient, high-quality data.

Historically, the development of drugs for the treatment of neuropsychiatric disorders has been serendipitous, especially concerning depression. Compounds discovered in the 1950s, such as iproniazid and imipramine, provided some relief for those suffering from depression but were initially developed for tuberculosis and schizophrenia, respectively. 3-4 Imipramine and many other current treatments for depression that rely on single-targeted drug interventions frequently fall short.

It has become evident that depression and many other psychiatric disorders are complex and involve multiple pathogenic factors.5 The failure of a single pharmacotherapeutic intervention leads to “drug cocktails” that may result in possible safety concerns or reduce medication adherence. This is where Entheogenix hopes to intervene.

Entheogenix will use seed SMCs that span from current synthetic compounds to traditional psychedelics (e.g., psilocybin) to develop novel molecules that have improved effectiveness in both in vitro and in vivo models for neuropsychiatric disorders. This approach may lead to the development of compounds that possess the therapeutic benefits of psilocybin for depression, but with improved characteristics such as quicker drug release and absorption or absence of the hallucinogenic effects typical to the psychedelics, now known as the mystical experience.

While the removal of the mystical of experience may prove beneficial when treating depressed individuals who exhibit symptoms of psychosis, many believe that this component of psilocybin therapy is integral to the therapeutic effect.6 However, many psychedelics also promote functional and structural neuroplasticity in-vitro, in the absence of the mystical experience. This increase in plasticity is thought to contribute to the long-lasting therapeutic effects of these compounds.7

The window of opportunity has opened, potentially facilitating a more effective, efficient, and safe drug development process through the application of AI. Disruptive technologies such as machine learning algorithms are especially relevant to the discovery of compounds targeted at neuropsychiatric disorders, in which current therapies lead to many unwanted, off-target interactions.

It is important to keep in mind that these technologies don’t aim to replace classical psychedelics completely. Instead, the reformulation psychoactive seed small molecule compounds endeavors to make psychedelic therapy more accessible to a larger proportion of the population, such as those who react unfavorably to the hallucinatory effects or those individuals that suffer from heart problems. Psychedelic compounds such as psilocybin and LSD mimick the effect of the neurotransmitter serotonin. Therefore, both of these psychedelics activate several serotonin receptors, including the 5-HT2B receptor. Activation of the 5-HT2B receptor for prolonged periods of time carries a heart risk8 – designer drugs could circumvent these potential side-effects.