Research into understanding LSD (lysergic acid diethylamide) has come a long way since Albert Hofmann first synthesized it in 1938. For example, in January 2017, a research team led by Dr. Daniel Wacker, currently of the Department of Neuroscience at the Icahn School of Medicine at Mount Sinai, published the crystal structure of an LSD (lysergic acid diethylamide) molecule bound to the human 5-HT2B receptor.1 This study is the first time researchers have gained insight into the molecular actions of any hallucinogen using the crystal structure of one of its receptors.

LSD is known to impart its psychedelic effects via the serotonin 5-HT2A receptor.2,3 However, any details of the interactions between LSD at this or any other receptor at a molecular level have remained a mystery until now. In this work, researchers studied the molecular interactions of LSD bound to the human 5-HT2B receptor (also called 5-HT2BR). They also compared the binding of LSD to 5-HT2BR to that of 5-HT2AR.

Figure 1 shows an illustration of LSD bound to 5-HT2BR taken from the paper published in Cell. 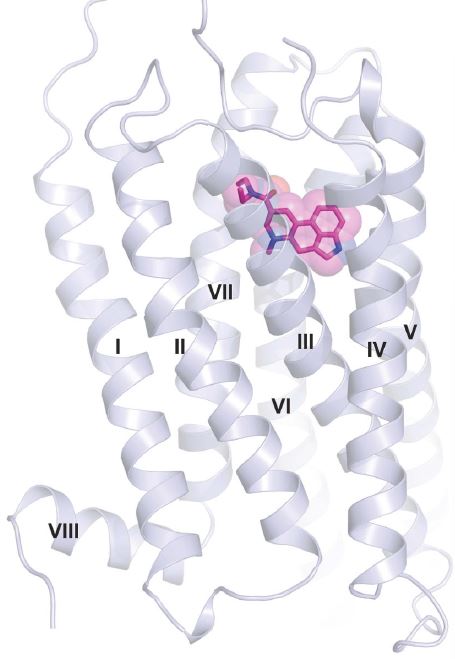 Figure 1: Cartoon illustration showing LSD bound to the human 5-HT2BR.1  The protein helices in the receptor are labeled with Roman numerals according to GPCR nomenclature. The bound LSD is shown as a stick model overlaid with a surface representation of the compound.

The psychedelic experiences obtained from LSD and other psychedelic compounds are the results of the binding of LSD to several different serotonin receptors. Overall, the 5-HT2AR is known to play a key role in the psychedelic effects of LSD2,3 and psilocybin.4 Like, 5-HT2AR, 5-HT2BR belongs to a family of receptors called G-protein coupled receptors (GPCRs). These two receptors have enough similarities in their binding of LSD and other compounds that researchers consider 5-HT2BR an excellent model system for 5-HT2AR.1 Therefore, what is learned by studying 5-HT2BR can shed light on the functioning of 5-HT2AR.

Another reason to study 5-HT2BR has to do with “functional selectivity” or “biased agonism.” 5,6  This phenomenon describes how some compounds stabilize a receptor in conformations which promote or dampen the activity of specific signal transduction pathways. In doing this, compounds can change the receptor environment and increase their affinity for the binding site. The details of how these mechanisms work are mostly unknown. However, work by Wacker et al. using 5-HT2BR 7 and other researchers is beginning to uncover the molecular structures that are essential for biased signaling. These mechanisms will have important applications in understanding how LSD and other psychedelics work and in their therapeutic applications.

The crystal structure showed the researchers that LSD has an unexpected configuration when bound to 5-HT2BR.1 Specifically, the receptor undergoes conformational rearrangements that are needed to bind LSD’s diethylamide moiety. These rearrangements included changes in the sidechain conformations of several amino acid residues that known to be important for binding LSD. Further, the researchers say, “These structural rearrangements suggested to us that LSD’s positioning in the binding pocket—mediated by the amide substituent–might be important for its signaling.”

This study also found that LSD dissociates from 5-HT2BR and 5-HT2AR exceptionally slowly.1 The researchers think this may be due to a “lid” that they saw form in one of the receptor’s extracellular loops located at the entrance to the binding pocket. This lid, they theorize, hinders LSD’s ability to escape from the binding site, prolonging its effect. When they modified the receptor with a mutation that increased the mobility of the lid, this greatly accelerated the binding kinetics of LSD, meaning it didn’t stay bound as long.

Another important finding from this study has to do with how LSD’s binding changed a receptor signaling pathway. Research data now show that LSD activates signaling proteins called ß-arrestins.8 These proteins are in part responsible for “turning off” a response by blocking the signaling pathways of GPCRs.  Using the same receptor model modified with the mutation as described above, the data revealed that the greater mobility of the receptor lid caused dampening the ß-arrestin signaling brought on by the binding of LSD.1 Also, the data showed that the slow binding kinetics of LSD is important for these signaling kinetics to work.

The authors also made an important observation when comparing LSD binding to homology models they made of 5-HT2BR and 5-HT2AR. The docking poses in the structures revealed that the binding mode (orientation) of LSD on 5-HT2BR was the same as they observed on 5-HT2AR.1 Interestingly, in dissociation experiments, they found even longer residence times for LSD at 5-HT2AR compared to 5-HT2BR. A longer residence time means LSD stayed bound to the receptor longer.

This study reveals how LSD binds to serotonin receptors, alters receptor protein conformations, and affects signaling pathways. Understanding how LSD prolongs the time it is bound to the receptor helps explain its long-lasting effects. The researchers also found that the serotonin receptor 5-HT2AR, known to be responsible for psychedelic effects, has the same binding mode for LSD as 5-HT2BR.

Crystal structures can never fully explain the interaction of drugs on receptors. However, the information scientists obtain from these studies helps to clarify some aspects of their structure, interaction, and function. These small discoveries add up, resulting in a clearer understanding of complex biochemical processes and pathways.