The feeling of being in a body, separate from the outside world, is a pivotal feature in normal waking consciousness. It may be difficult to imagine, but this feeling of separation is not necessarily universally present in other organisms. In humans, mental disorders, brain injuries, mystical experiences, and substance use can all dissolve the perception of these boundaries.1

The use of psychedelics, such as psilocybin mushrooms (aka magic mushrooms), at certain doses can result in the phenomenon known as ego death. Ego death is generally recognized as when the distinction between yourself and your environment dissolves, which leads to a feeling of connectedness between all things in the universe.

Metacognition is being aware and able to reflect on one’s own thought processes. It’s an advanced multisensory behavior associated with the brain’s Default Mode Network (DMN).1-6 Neural networks are spontaneous, self-sustained, cyclic patterns of activation. The DMN is a task-negative network, meaning that it is present in the absence of tasks. Psychedelic compounds appear to have an effect on the DMN, which results in ego death.

It’s important to understand better the methodology of measuring brain networks to elucidate how researchers distinguish changes in selfhood. Only recently, researchers have combined techniques of functional magnetic resonance imaging (fMRI) and electroencephalogram (EEG) to investigate brain networks (Figure 1).2-4,6 fMRI is ideal for representing the functional connectivity for the spatial organization of brains depending on blood oxygen levels, but it takes a while to measure, so it’s not good at tracking changes through time. EEGs are good at tracking changes of neuron electric voltage through time, but cannot measure past the outer layer of the brain. Combining the two allows researchers to correlate deeper-brain-layer locations for changes through time, i.e., a brain network.

Figure 1: an MRI (left) and an EEG (right).
Image of MRI by Michal Jarmoluk, EEG by Ulrich Wechselberger.

The removal of specific nodes on densely interconnected networks can rapidly fragment their ability to communicate.7 In humans, the association cortices, areas responsible for memory, and areas for gating environmental stimuli are densely interconnected areas. These areas play a vital role in integrating multisensory data.8,9

A 2011 meta-analysis that included 87 studies, representing 1,433 participants, found that the processing of the self was due to specific midline structures of the brain (Figure 2).10,11 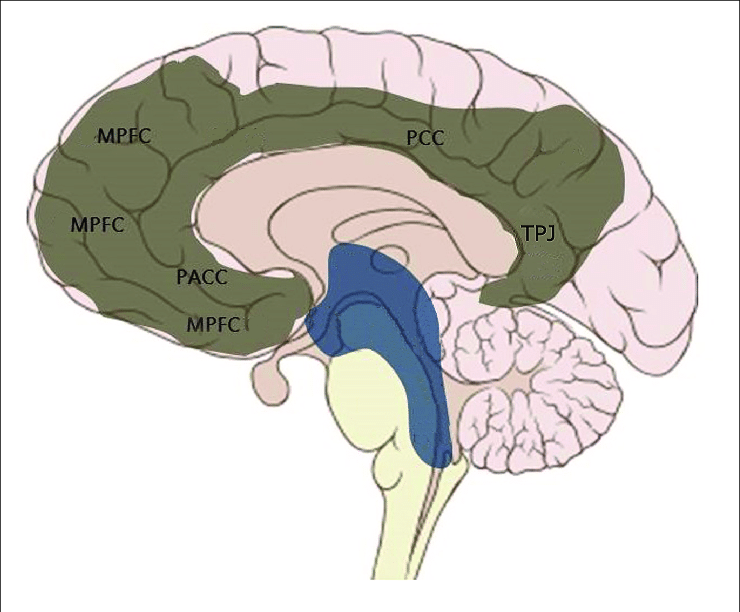 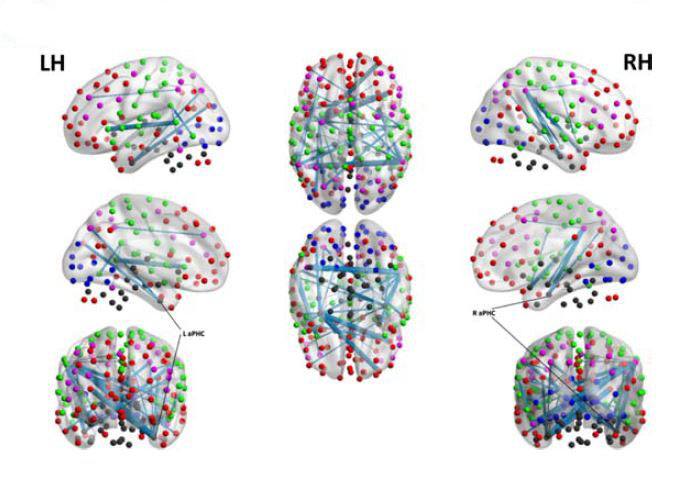 Previous studies show after psilocybin administration the existence of decreased cerebral blood flow, functional connectivity, and oscillatory power within the DMN. Ego death appears to be due to the decoupling of the DMN, aka the resting state network, from important brain areas dealing with memory. One such area, the parahippocampal cortex, is also known as the gateway to the hippocampus. It mediates connections to memory for the various spontaneous brain networks.

Only alpha band spatial patterns, a specific type of electromagnetic frequency produced by the brain in 8-12 Hz oscillations, showed considerable overlap with the function of the DMN. Researchers found a 99.8% certain correlation that alpha wave magnitude decreased at the same time as the decrease in the feeling of having an ego after psilocybin administration (Figure 4).2 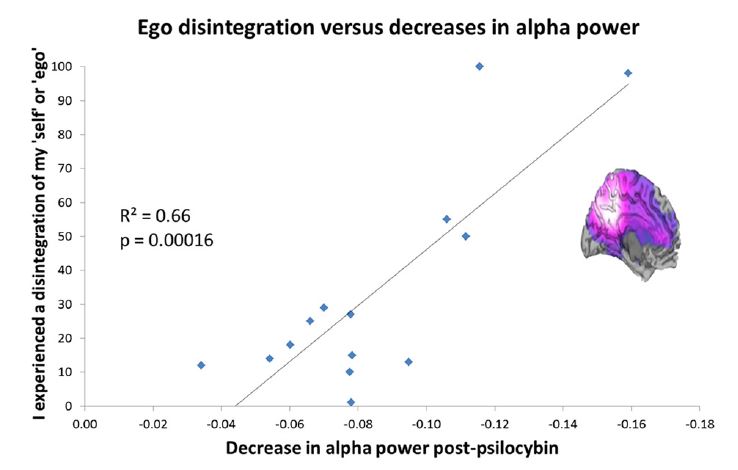 Psychedelics decrease functional connectivity between the resting state network and memory. This does not mean it gets rid of the ability to use memory. Brains prioritize self-associated stimuli.12 Typically, when things are out-of-arm’s length they are integrated to a lesser extent into the neural network responsible for the feeling of selfhood.13 The decrease in resting connectivity is analogous to a decrease in familiarity. A decrease in familiarity is an increase in novelty, which is a potential mechanism for enhanced learning. Psychedelics’ potential use as a creativity enhancer is embedded in its ability to increase connectivity between association cortices and memory. In addition to this, researchers suggest that reconstructing the perception of selfhood may be of therapeutic benefit for disorders where the perception of selfhood is too rigid (such as depression, anorexia, and OCD).14

The feeling of selfhood is ingrained in resting brain networks, which are spontaneous cyclic patterns of activation. Researchers have combined fMRI and EEG’s in new ways to better measure these networks. Both the default network (the resting network of the brain) and the salience network are implicated in the processing of familiarity and selfhood. Psychedelics disrupt these brain networks with areas involved in memory in potentially beneficial ways.