Creativity is a mystery essential to the human condition. When encountering difficult problems, the ability to creatively engineer a solution often outweighs any amount of brute effort put towards solving them. This is the old motto: work smarter, not harder. So called “smart drugs” may help with the effort part; however, psychedelics may occupy the niche of increasing creativity, allowing for the spontaneous generation of new ideas.

Nootropics are drugs that aim to make people smarter.1 They work by increasing cognitive processes associated with memory, creativity, motivation, and attention. In scientific literature, there are generally three effects studied: better memory, motivation, and attention.1-3 Many classes of nootropics interact with acetylcholine function for memory enhancement.2,4,5 Stimulants generally aid in enhancing both attention and motivation.3,6

While psychedelics encompass many nootropic properties, research into psychedelics is currently being revisited for psychedelics’ capacity to increase creativity.7,8

Divergent thinking, or non-linear creativity, is by nature difficult to define and measure.7 A recent 2018 study published in Proceedings of the National Academy of Sciences used functional magnetic resonance imaging (fMRI) to model the brain for creative ability.9 Across four independent datasets, researchers were able to predict creative ability in a robust manner. They found an association between high creative ability and dense connections primarily in the brain’s frontal and parietal cortices. These cortices contain high amounts of 5HT2 receptors, a specific subtype of serotonin receptor many psychedelics act upon.10

A recent systematic review suggested an association with all substance use and creative ability due to the “loosening” of cognitive processes.11 In addition, this review article provides a comprehensive look at numerous studies claiming an increased creative ability with psychedelic use. “Loosening” is relevant because there is a general principle observed in scientific studies that psychedelics, like psilocybin, alter consciousness by disorganizing brain activity.12

Due to “loosening” the current way your brain organizes itself, new connective states emerge as it attempts to reorganize itself (Figure 1).13 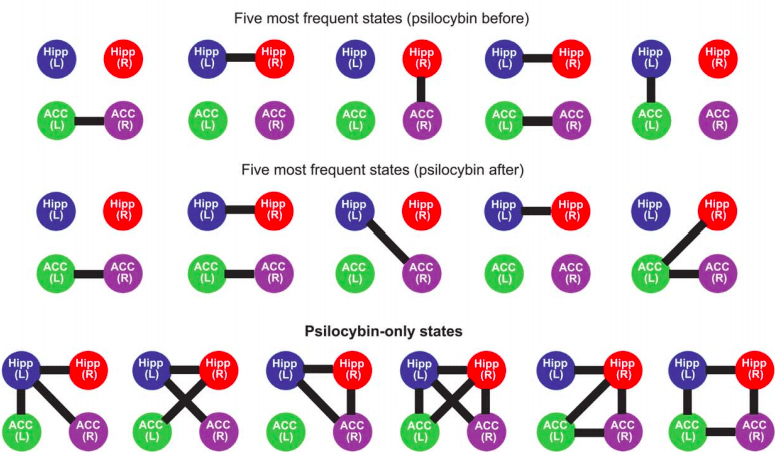 Figure 1, published by Human Brain Mapping, uses fMRI techniques to demonstrate the increased connectivity qualities of psychedelic brain states.13 Increased connectivity with hippocampal regions of the brain, areas dealing with memory, leads to an increased ability to relate ideas. This hyper-associative state serves as a mechanism for increased creative ability.

The Popularity of Microdosing

“The billionaires I know, almost without exception, use hallucinogens on a regular basis,” explains Tim Ferriss, a podcaster and psychedelic advocate. It’s an open secret that Silicon Valley employees use psychedelics regularly as a means to enhance productivity and chronically administering small doses of psychedelics are sought after.17

Colloquially, a microdose is a sub-threshold dose, meaning it’s on the threshold of perception.18 Users do not aim to feel “high”, and there should only be minimal identifiable effects. There isn’t an objective consensus on what constitutes a microdose, and subjective and perceptual effects of weighted doses can vary from individual to individual; however, there are many websites with slightly differing dosage recommendations. Overall, experts say that a microdose should be small enough to provide no significant change in consciousness.19

Microdosing may have risks. Variations in dosing schedules are not scientifically validated.18 Using psychedelics, which are serotonin agonists, elevates serotonin levels. It has been known since the mid-1960’s that heart valve disease is associated with elevated serotonin levels in people taking serotonin agonist drugs.21 In general, psychedelics are very physiologically safe as an infrequent dose.9 Frequent dosing, characteristic of a microdosing regimen, does not have any long-term studies.

Psychedelics may effectively increase creativity. They disorganize the brain, leading to a “looser” regimen of cognitive processes. In the brain’s attempt to reorganize itself new connective states emerge. Capitalizing on this, microdosing became popular recently as a means to enhance productivity. Currently, the vast majority of dosage and dosing schedule recommendations are not based on scientific peer-reviewed studies.

Examining the Cognitive Neuroscience of Psychedelics