The study of consciousness is one of the most intriguing and multidisciplinary areas of research at present. Experts spanning the fields of neuroscience, philosophy, artificial intelligence, cognitive science, and anesthesiology contribute their opinions of what they believe constitutes consciousness and how exactly to define it.

For the sake of clarity, this article defines consciousness as a brain state that requires both wakefulness and alertness. Wakefulness (or arousal) is controlled by the more primitive areas of the brain (brain stem and basal forebrain) and is the ability to open one’s eyes and have basic reflexes (i.e., coughing and swallowing).1 Awareness, which arises as a result of more recently evolved cortical mechanisms is associated with complex thought (the content of consciousness) and is more challenging to evaluate.2

Disorders of consciousness (DoC) are defined as brain states in which consciousness is affected by damage to the brain. Damage may be a result of traumatic brain injury (i.e., car accident), non-traumatic brain injury (i.e., due to a stroke) and progressive brain damage (i.e., Alzheimer’s disease). DoC are diagnosed and categorized on a spectrum that includes coma, vegetative state (VS) and minimally conscious state (MCS).3 Individuals in a comatose state exhibit no signs of wakefulness or awareness. They lay with their eyes are closed and are unresponsive to external stimuli. A person in a VS is technically awake but shows no signs of awareness. They can regulate autonomic processes such as heartbeat and breathing without assistance but display no visible signs of emotion. Individuals that present minimal or inconsistent signs of awareness are categorized as being in an MCS. There may be instances when those in an MCS can communicate or respond to instructions, such as moving a finger when asked but by and large they are unresponsive. Locked-in syndrome (LIS) has comparable characteristics to DOC, but it is a distinct condition. A person with LIS is both awake and aware but experience complete paralysis. While being unable to move their eyes in the majority of cases, individuals may achieve some form of communication through blinking.

Researchers categorize neural complexity through the use of the Perturbational Complexity Index (PCI). PCI quantifies the complexity of electroencephalogram (EEG) responses to pulses of Transcranial Magnetic Stimulation (TMS)(Fig. A).6 A real-world parallel is to imagine hitting a bell and quantifying the resulting reverberations. In patients with DoC, PCI accurately indexes the various states of consciousness, with PCI being lowest in VS, higher in MCS and higher still in those patients that have recently come out of an MCS. Notably, those suffering from locked-in syndrome exhibit the same PCI as healthy awake individuals, as they are fully awake and aware.6 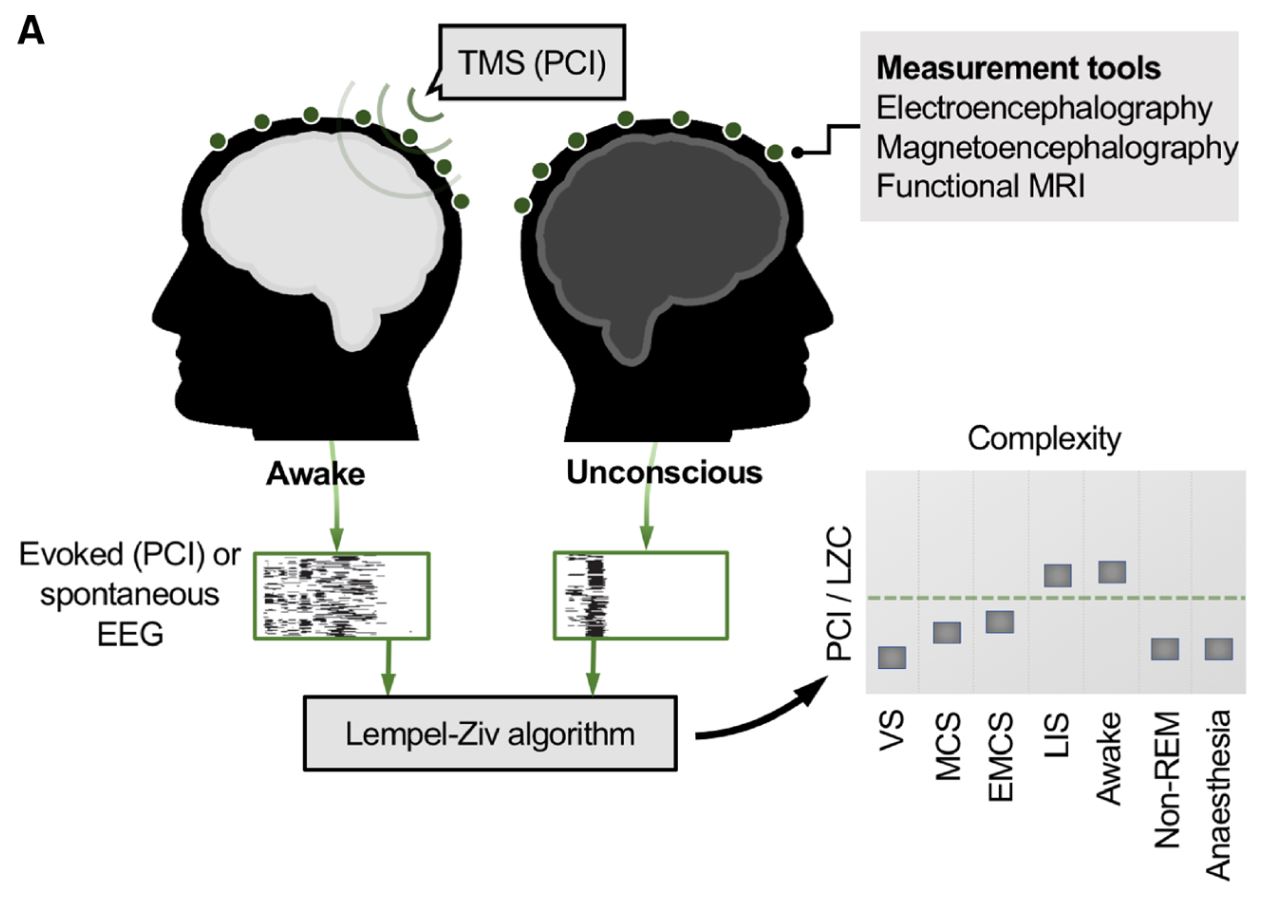 At the core of the PCI method is quantification of the complexity of TMS-evoked EEG responses using an application of the Lempel-Ziv algorithm, a measure of compressibility which counts the sum of unique patterns in a sequence. This is referred to as the Lempel-Ziv complexity (LZC). The LZC also measures the EEG recordings of spontaneous brain activity, i.e., without TMS perturbation and can accurately differentiate between conscious and unconscious states. Moreover, concerning DoC, LZC-based values of spontaneous EEG robustly differentiate VS from MCS patients and values increase in parallel with patients’ conscious level.7

Psychedelics and Disorders of Consciousness

Recently, research groups demonstrated that brain complexity (LZC) observed during psychedelic states after LSD and psilocybin ingestion, exceeds those found in standard waking consciousness (Fig.B). The psychedelic associated elevation in LZC increases the richness of conscious experience. Furthermore, the degree of complexity has a positive correlation with the subjective intensity of the psychedelic experience.8

The increased LZC observed in psychedelic states is thought to originate from interaction with serotonin (5-HT) receptors, in particular, the 5-HT2A receptor. Psilocybin and LSD act as agonists at this receptor subtype, meaning that they activate the receptor. 5-HT2A receptors are located in many brain regions thought to be important in the generation of consciousness.9 Activation of the receptor is associated with cognitive flexibility, while antagonism (blockade) of the receptor is associated with a decrease in cognitive flexibility and slow-wave sleep.10-12 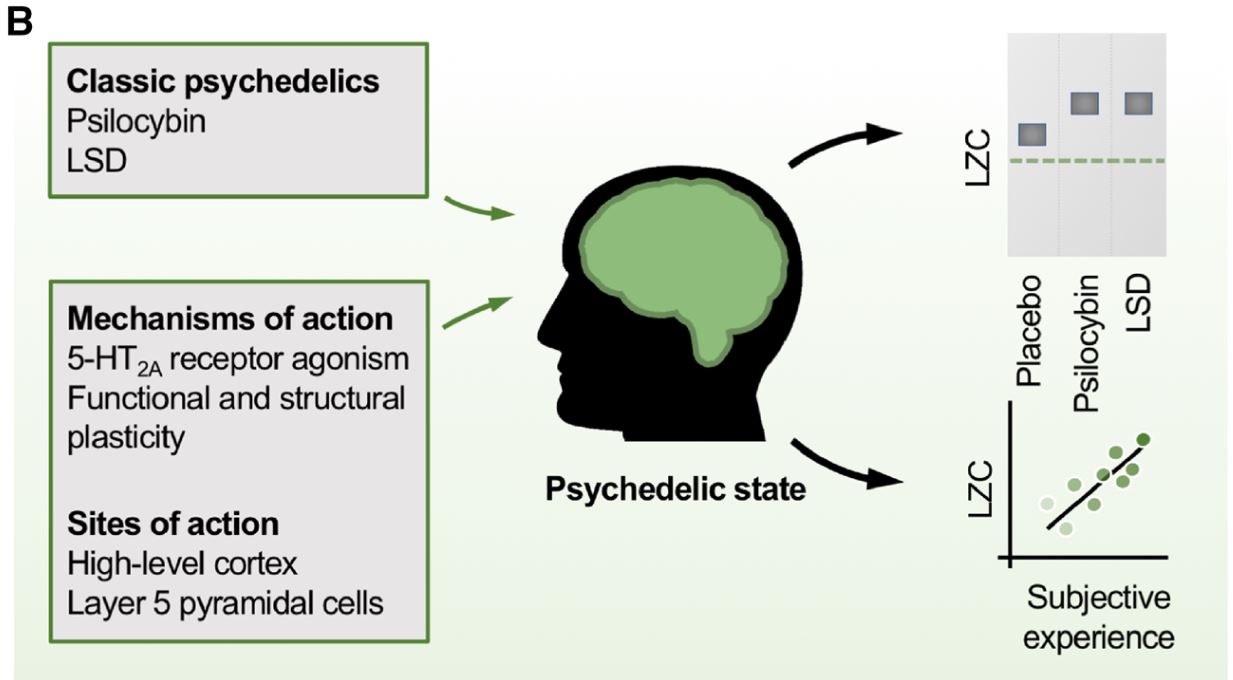 Although the usage of psychedelics in patients with DoC is a new therapy that is showing promise, one must to remember to consider the significant ethical questions that are associated with such a hypothesis. The first being the question of consent. Dr. Robin Carhart-Harris, an advocate for the implementation the treatment argues that “the inability of patients to consent doesn’t make research ethically illegitimate so long as it is ethically proportionate, a judgement that hinges on the accurate assessment of risks and benefits.”13 Existing therapies in the treatment of DoC include the surgical implantation of Deep Brain Stimulation (DBS) electrodes, which function to “shock” the brain in an attempt to improve consciousness. This procedure is highly invasive and currently performed without the patient’s consent. Furthermore, scant evidence exists supporting the benefits of DBS in improving conscious awareness.14

A further argument against the use of psychedelics in DoC is the possibility that the patient may experience a “bad trip.” The caveat to this argument is that the emergence of “bad trips” is almost exclusively observed with improper use of psychedelics. The recent resurgence in clinical trials involving psychedelics ensure that all the necessary safety barriers are in place to mitigate the onset of a “bad trip.”  Experimental evidence suggests that, contrary to conventional wisdom, the use of psilocybin leads to positive effects on medium to long term mental health outcomes.15 Moreover, a contributing factor to the onset of a “bad trip” is the negative expectations before ingestion of the compound. Those suffering from DoC do not have the conscious capacity to expect a negative outcome.

The recently hypothesized therapeutic action of psychedelics in DoC presents an opportunity for improved understanding of the fundamental science underlying consciousness, along with the potential for a major clinical breakthrough. Existing research demonstrates the positive correlation between psychedelics and brain complexity, which provides a strong hypothesis for their utilization in DoC. However, the application of this hypothesis in a clinical setting will raise ethical concerns and experimental challenges.  A pragmatic and open-minded approach is required for future research, as many groups may harbor strong biases for and against the usage of psychedelics in this paradigm.