In the psychonaut community, one compound stands out in particular for its ability to immerse the user into an entirely different but no less real-world or dimension to our conventional plane of consciousness. N, N-Dimethyltryptamine (DMT) is a serotoninergic psychedelic, recognized as the active constituent in the brew, ayahuasca. Users describe psychedelic experiences under the influence of DMT as Breakthrough Experiences, characterized by intense somatic, visual, and emotional effects. Many individuals report encountering other entities or beings during these experiences.  Phrases such as dream-like state and near-death experience are often used to convey the phenomenological aspects of a DMT trip.

But how does this naturally-occurring psychedelic produce such profound experiences? A recent Nature paper from the psychedelic research group at Imperial College London (ICL) outlines the effects of  DMT on the resting-state brain.1 The group identified the neural-correlates of the DMT experience using an electroencephalogram (EEG), a technology used to measure neural oscillations or brain waves. But before examining the specifics of this paper, it is crucial to describe what brain waves are.

The approximately 86 billion neurons that make up the cellular populations of our brains interact via an electrochemical communication system. Specific neurons pass messages onto one another via the propagation of action potentials. During an actional potential, the electrical potential of a neuron rapidly rises and falls. Technologies such as EEG or Magento-Encaphelogram (MEG) measure the rhythmic patterns of action potentials in a large population of neurons (neural ensembles). These recordings are referred to as macroscopic neural oscillations or brain waves and are labeled alpha, beta, delta, gamma, theta (Figure 1). 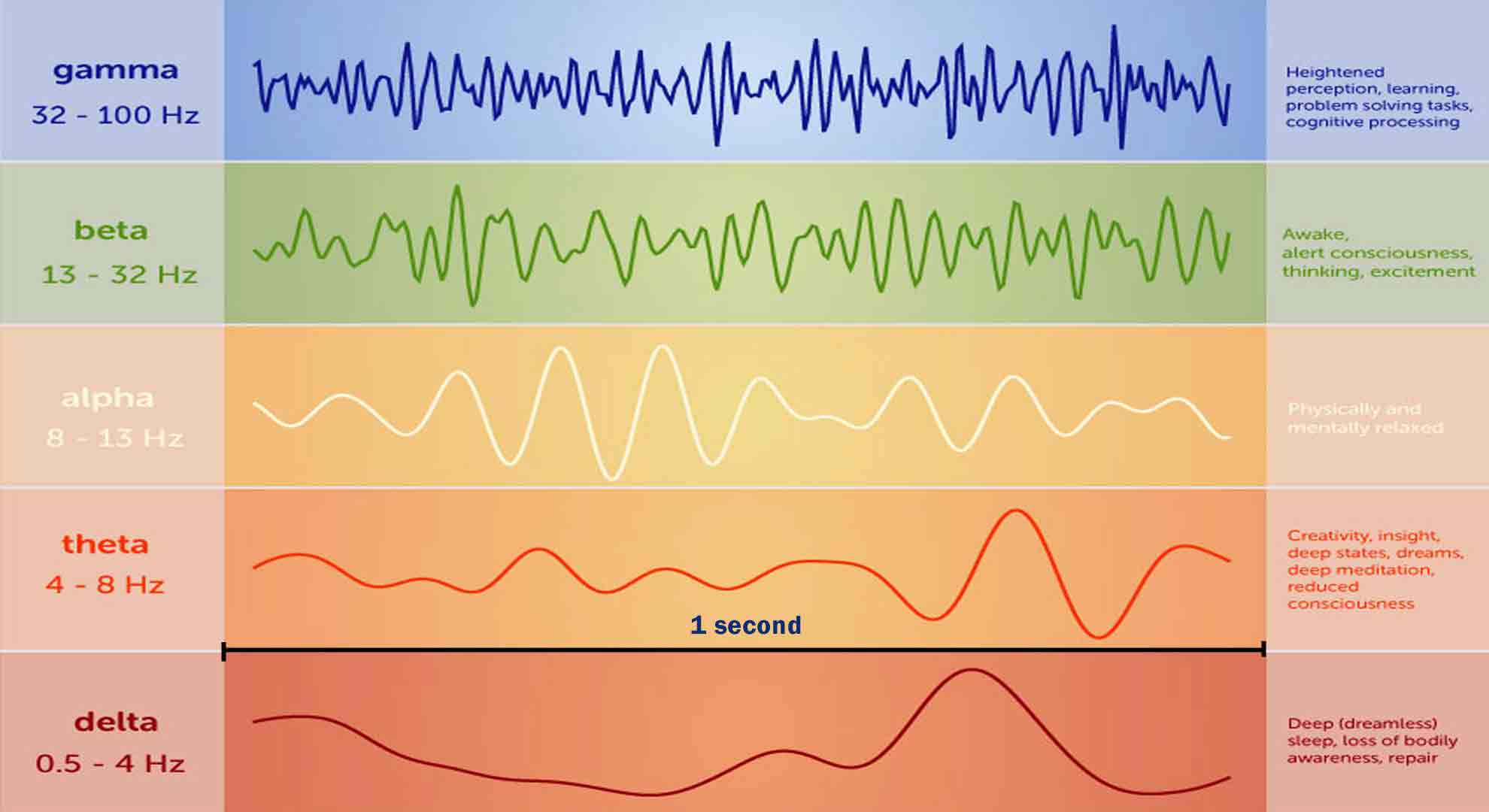 Brain waves are characterized by the frequency (Hz) of neuronal firing. Certain oscillatory activity patterns have been linked to specific cognitive states. The most well-known is the alpha wave (8-13 Hz), the most prominent rhythm of the resting-brain, a normal wakeful state where an individual is quietly resting. Conversely, scientists associate the theta wave (4-8 Hz) with Rapid Eye Movement (REM or dream) sleep and states of reduced consciousness. Both alpha and theta are relevant in the context of the ICL paper.

Researchers at ICL recruited 13 participants (6 females, 7 males), all of whom had prior experience with psychedelics. The subjects were administered DMT intravenously (IV), with doses ranging between 7-20 mg. IV administration of DMT results in a rapid onset of action (2-3 minutes) and a relatively short psychedelic experience (15-20 minutes). Due to the brief duration of the experience, the researchers selected EEG as the optimal technique for the study as it demonstrates excellent temporal resolution. In other words, EEG measures the activity of the brain accurately in real-time.

The experiment was a single-placebo controlled study, meaning that the researchers knew which participants would receive the active ingredient and who would receive the placebo (saline solution).  The researchers also employed a fixed-order design for the experiment. All participants received the placebo on their first visit, allowing for familiarisation with the study group and the environment (see set and setting). Participants were then administered DMT on their second visit, which occurred one week later.

Interestingly, the study group observed an increase in signal diversity, with the emergence of theta and delta activity during the peak of the experience, with theta representing the more functionally relevant oscillation. Theta oscillations are associated with REM sleep and visionary states. The authors posit that the immersive breakthrough experience may be a result of alpha suppression combined with increased theta and or delta activity.

Dr. Christopher Timmerman, the lead author of the paper, writes that the breakthrough experience may be “a perceptual mechanism by which the brain switches from the processing of [external] incoming information to a state in which processing is [internal]-driven, as in classic REM sleep dreaming.”

The observation of increased signal diversity during the DMT experience is consistent with the research group’s entropic brain hypothesis, formulated to describe the psychedelic state.4 The entropic brain hypothesis proposes that within a limited range of states (i.e., within a critical zone), the richness of content of any given conscious state can be meaningfully indexed by the entropy (disorder) of its spontaneous brain activity (Figure 2). 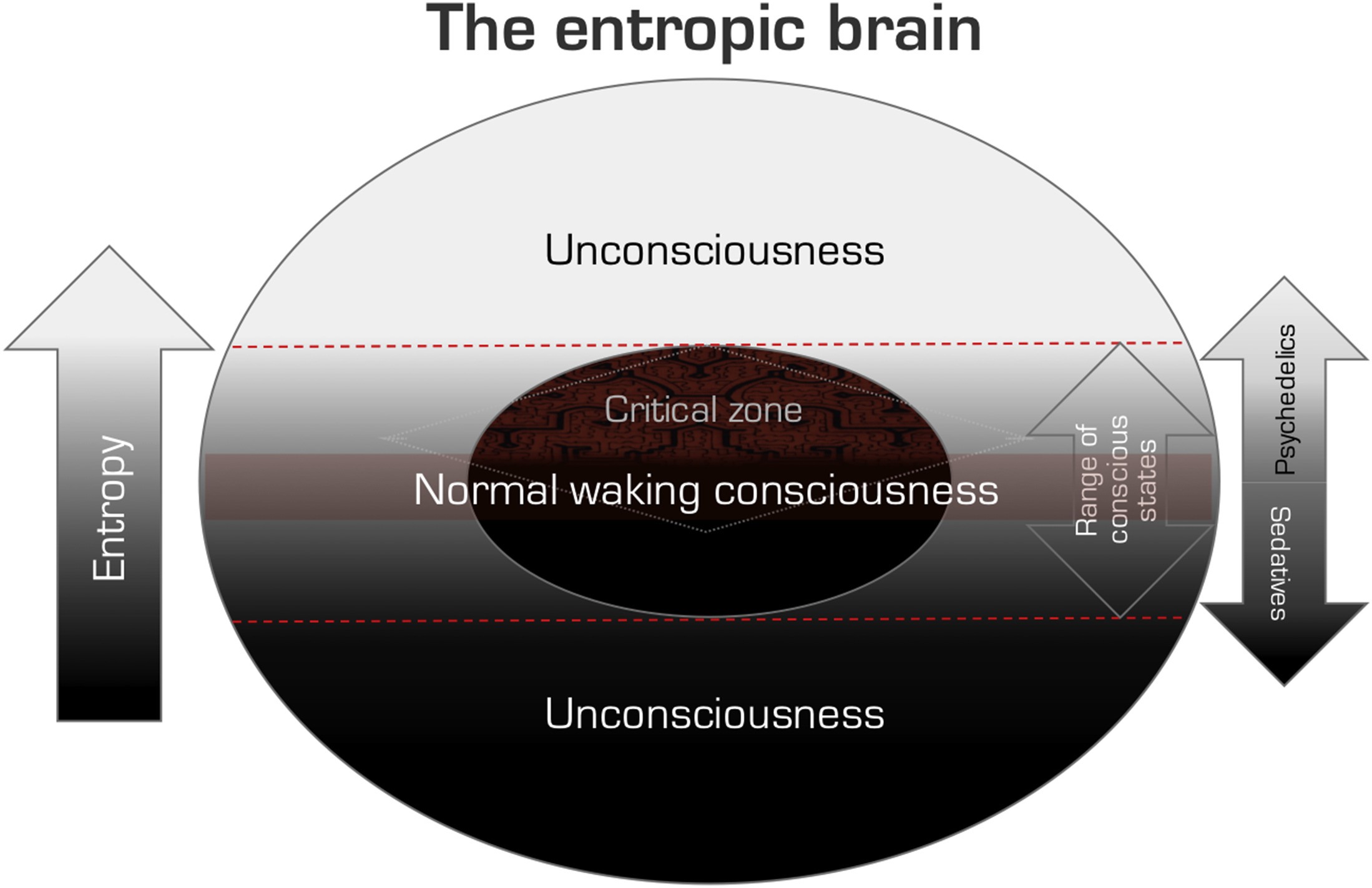 Figure 2: The entropic brain. Consciousness is proposed to appear inside a critical zone at which the entropy or complexity of brain activity is neither too ordered nor disordered. Psychedelic compounds are posited to shift brain entropy and conscious content upwards, higher within the zone of criticality. Sedatives and anesthetics shift the brain downwards, i.e., into a subcritical zone and eventual unconsciousness, through the loss of content and phenomenal experience.4

Putting it in Perspective

For many years, the profound effects of ayahuasca and DMT in general, have been associated with mysticism. Thanks to the recent resurgence in psychedelic research, science can now shed some light on the neural correlates of the so-called breakthrough experience.

Though psychedelic research is still in an early phase, converging evidence outlines some shared characteristics of the psychedelic state. Namely, the decrease in alpha oscillations and an overall shift towards a more chaotic, disorganized brain state. In other words, an increase in entropy. Perhaps in the coming years, the world will see the emergence of a unified theory of the psychedelic state. Such a theory would also provide valuable insights into the nature of reality and consciousness itself.

How is dmt processed from the acaia tree? I have them in my yard. Is it a certain variation of species?

Alpha wave activity is actually assumed to have an inhibiting effect on waking consciousness, as seen during anaesthesia with hypersynchronous alpha activity in the prefrontal cortex (Supp et al. 2011):

So that could mean that DMT and other psychedelics lift us from brain activity that regulate consciousness through inhibition during wakefulness.