A team of scientists from CaaMTech and the University of Massachusetts Dartmouth has reported the synthesis of the freebase form of 5-MeO-DALT (5-methoxy-N,N-diallyltryptamine).1 In recent months, the same research team has published several articles describing other structurally related tryptamine compounds in new crystalline forms.2–8

In the April 2020 study published in the journal IUCrData, the research team led by Andrew Chadeayne describe the crystal structure of 5-MeO-DALT (Figure 1) as follows: 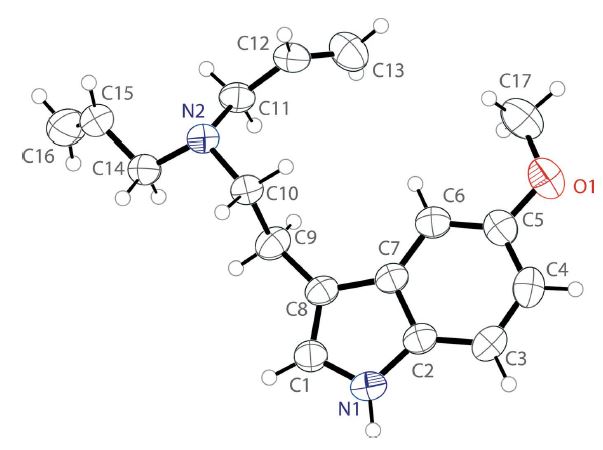 Figure 1: The molecular structure of the freebase of 5-MeO-DALT showing labeling of the atoms.1

5-MeO-DALT is a synthetic tryptamine analog of 5-MeO-DMT (O-methylbufotenine), a compound found naturally in toad secretions9 (Figure 2). The consensus among experts is that 5-MeO-DALT was first synthesized by Alexander and Ann Shulgin.10  Studies have shown that 5-MeO-DALT induces the head twitch response in mice.11 As such, these results indicate it has psychedelic effects that are mediated via the serotonin 5-HT2A receptor.

Figure 2: The chemical structures of 5-MeO-DALT and 5-MeO-DMT. 5-MeO-DALT is a synthetic analog of the naturally occurring 5-MeO-DMT.

Why Crystal Structures Are Important in Psychedelic Research

Crystal structures are essential for helping researchers “see” properties and effects at a molecular level, giving them a better understanding of how receptors, other proteins, and compounds look and act in nature. While molecular modeling software can provide helpful insight into the three-dimensional configuration of molecules, X-ray crystallography provides empirical data about a compound’s physical properties.

The crystal structure of the freebase form of 5-MeO-DALT is essential to understanding its physical properties and for studying its activity at receptors by using modeling studies. Although it is a synthetic compound, further investigation of 5-MeO-DALT could help shed light on the pharmacology involved in the effects of ingesting toad secretions.

Crystal structures do not fully explain the interaction of drugs with receptors. However, the information scientists obtained from these studies help to clarify some aspects of a given drug’s structure, interaction, and function. Understanding the pharmacology of psychedelic compounds could lead to formulations that provide predictable and positive effects while minimizing unwanted or harmful side effects.