A team of scientists from CaaMTech and the University of Massachusetts Dartmouth has reported the synthesis of two new crystalline forms of norpsilocin. Norpsilocin is a naturally occurring psilocybin analog that has been found in psilocybin (aka magic mushrooms).

Crystal structures are essential for helping researchers “see” properties and effects at a molecular level, giving them a better understanding of how receptors, other proteins, and compounds look and act in nature. While molecular modeling software can provide helpful insight into the three-dimensional configuration of molecules, X-ray crystallography provides empirical data about a compound’s physical properties.

The April 2020 study published in Acta Crystallographica describes the crystal structures of norpsilocin (4-hydroxy-N-methyltryptamine, 4-HO-NMT) as a free base and a fumarate salt.1 Norpsilocin is a recently-discovered derivative of psilocybin. In 2017, scientists at the Hans-Knöll Institute in Jena, Germany, isolated norpsilocin from the mushroom Psilocybe cubensis.2

In 2020, Sherwood et al. published a synthetic method for producing norpsilocin and other less-studied magic mushroom tryptamine compounds in the lab.3 Using receptor activation studies, Sherwood’s team discovered that norpsilocin is more potent than psilocin at the serotonin 5-HT2A receptor in vitro. However, they also observed that it does not lead to a head twitch response (HTR) in rodent models. The HTR was first observed by Corne and Pickering in 1967.4 It is a widely used behavioral assay to test for activity of the 5-HT2A receptor activity.

According to Sherwood, prior to their 2020 publication, “few studies have been conducted to evaluate the pharmacological activity of these tryptamines, largely due to lack of availability of the compounds.”

Recently, famed mycologist Paul Stamets described his experience consuming baeocystin (a prodrug of norpsilocin) on the Joe Rogan Podcast episode #1385. According to Stamets, baeocystin is not psychedelic. “I was ready for liftoff. I was hoping for liftoff, I know what liftoff feels like, and I didn’t get it.”

Although norpsilocin was discovered in 2017 and synthesized in 2020, the report by Chadeayne et al. is the first to quantitatively describe any crystalline form of norpsilocin. This report is also the first to describe a salt of norpsilocin, namely the fumarate salt. In recent months, the same research team has published several articles describing other structurally related tryptamine compounds in new crystalline forms.5–9

The authors describe the structural features of the freebase form of norpsilocin (Figure 1) as follows:

The asymmetric unit contains one full 4-hydroxy-N-methyltryptamine molecule. The ethylamine arm of the tryptamine is modeled as a two-component disorder with a 0.895 (3) to 0.105 (3) occupancy ratio. 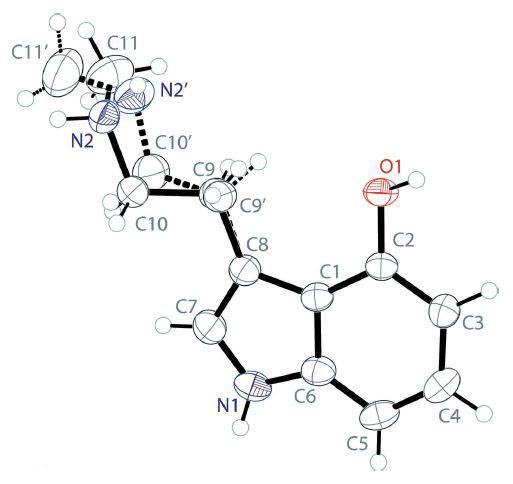 The description of the norpsilocin fumarate structure (Figure 2) is as follows:

The fumarate salt of 4-HO-NMT crystallizes with a tryptammonium cation and one half of a fumarate dianion in the asymmetric unit. 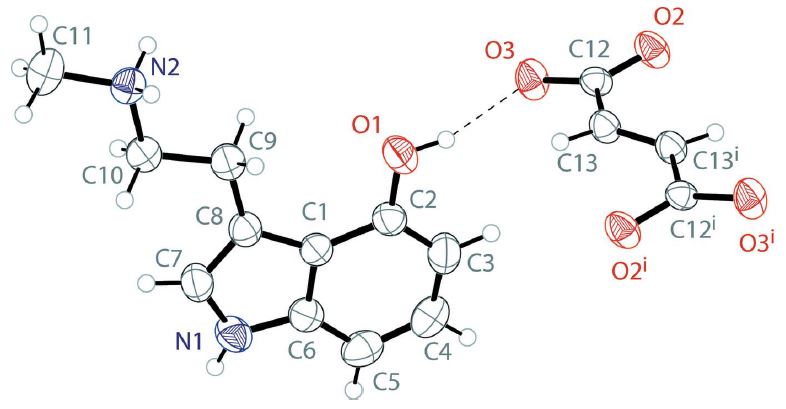 Andrew Chadeayne, the lead author of the study, posted on LinkedIn: “CaaMTech is happy to announce that we have made and characterized the first pure crystalline forms of norpsilocin….we are grateful for the opportunity to contribute to the fundamental understanding of these understudied compounds. We hope our work supports further research into these interesting compounds.”

Dr. Chadeayne also described the work on CaaMTech’s webpage. “I think it’s pretty clear that the minor components in magic mushrooms contribute to the overall experience….Different magic mushrooms have different amounts of different compounds. And now we know that some of those compounds are highly active. From a chemical standpoint, we’re talking about different drugs.”

Why Crystal Structures are Important to Psychedelic Research

Crystal structures do not fully explain the interaction of drugs with receptors. However, the information scientists obtained from these studies help to clarify some aspects of a given drug’s structure, interaction, and function.

Understanding the pharmacology of psychedelic compounds could lead to formulations that provide predictable and positive effects while minimizing unwanted or harmful side effects.  Other researchers in the psychedelic space have utilized X-ray crystallography in making new psychedelic compounds. For example, COMPASS Pathways’s experimental drug COMP360, for which they were granted a United States Patent, is a crystalline form of psilocybin.

Why Norpsilocin is An Exciting Area of Psychedelic Research

Although it wasn’t discovered until 2017, recent studies indicate that norpsilocin (or a prodrug of norpsilocin, like baeocystin) may be a compound with significant therapeutic potential. Data from Sherwood et al. appear consistent with Paul Stamets’s observations: Norpsilocin is a potent 5-HT2A agonist but does not elicit the head twitch response typically associated with a psychedelic trip.

Thank you for reporting on our research. Norpsilocin is definitely a very interesting compound. What an exciting time to be involved in psychedelic R&D! Hopefully more academic scientists will join the effort.

I was the first person in the “RC” world to get China to start producing 4-AcO-DMT fumarate. Before 2006 when I paid for a custom synthesis of that one, none of the companies were producing any -DMT’s. So then because it sold well they trusted me when I recommended they make 4-AcO-NMT. I never got some myself but reports said it was inactive… but I don’t think anyone really experimented with trying to mix it with other psychedelics to see if the effects would change.