Scientists have some understanding of the receptor mechanisms involved in the psychedelic experience. The current theory is that the binding of an agonist or partial agonist to the serotonin 5-HT2A receptor elicits a psychedelic effect via signaling pathways.1–3 Some experts hypothesize that the 5-HT2C receptor may also be involved.2

The general effects of psilocybin (actually, its active metabolite psilocin) are documented, and they cover a range of emotional, cognitive, and perceptual changes.2 Set and setting (aka context) is known to play a critical role in the subjective effects of psychedelics.4 Despite this understanding, there is still considerable unexplained variability in the individual experience from ingesting psilocybin.

Now, research is showing that the morphology of certain parts of the brain may be a predictor of the magnitude of the psychedelic experience from psilocybin.

In February 2020, a research team, including Franz X. Vollenweider, published a randomized, double-blind, placebo-controlled study in Biomedicines.5 In this study, the authors built on previous research supporting the hypothesis that “Individual brain morphology measures can be used to predict various pharmacological challenges and behavior.” Specifically, the team measured the thickness of areas in the cingulate cortex of people’s brains and compared it to their subjective ratings from ingesting psilocybin.

The study recruited 55 people from local universities (33 men and 22 women) with a mean age of 25 years. They were randomly divided into three groups. The low and high dose groups received 0.16 mg/kg and 0.215 mg/kg psilocybin, respectively, in two sessions at least ten days apart. The control group received maltose as a placebo.

One hour after each psilocybin dose, the participants underwent a magnetic resonance imaging (MRI) of their brain. The areas of the brain the researchers measured the thickness of were in the right hemisphere. They were the rostral anterior cingulate, caudal anterior cingulate, and the posterior cingulate (Figure 1). The authors stated that they chose these areas because they have a high expression of 5-HT2A receptors compared to other regions of the limbic system. For the control area, they chose a part of the right hemisphere called the post central, where there is low expression of 5-HT2A receptors. 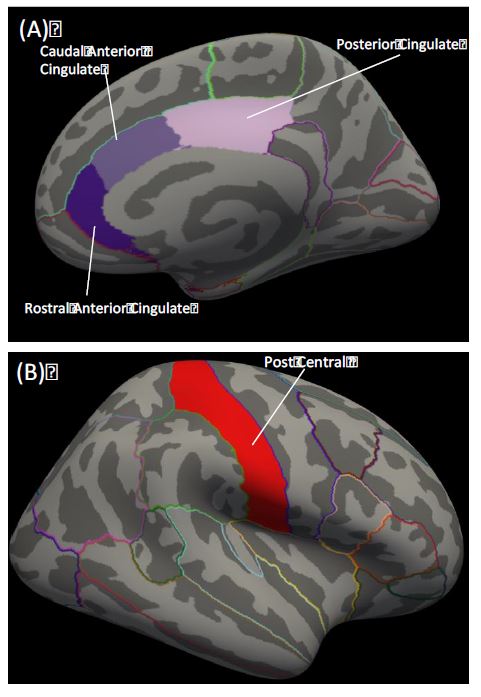 The Five-Dimensional Altered State of Consciousness (5D-ASC) questionnaire was administered to each participant six hours after each dose. Of the 11 sub-scales measured in the 5D-ASC, the researchers focused on the data from four of them: experience of unity, spiritual experience, blissful state, and insightfulness.

The data revealed that there were no significant differences in the four 5D-ASC sub-scale ratings based on dose. The authors theorized this might be because the doses reflected the high and low ends of the medium dose range for psilocybin based on the literature. They recognized two doses being a strength of the study, but also a limitation because they were not sufficiently different to detect any dose effects. Therefore, the authors then looked at all the data together, regardless of the dose.

Analyzing the data in this way, the researchers observed that the thickness of the right hemisphere rostral anterior cingulate predicted ratings for the four 5D-ASC sub-scales (i.e., the thicker the region, the higher the person’s subjective experience ratings). Conversely, the thickness of the caudal and posterior cingulate areas was not predictive of the sub-scale ratings. The authors noted that these results correlate with previous studies in the literature.

The authors stated, “This is the first study to evaluate brain morphology as a predictor of the emotional subjective experience of psilocybin in healthy controls.” They hypothesized from the data that,