Recent years have seen the rise in promising data from academic labs concerning the therapeutic potential of a variety of psychedelic substances in treating anxiety and depression.¹⁻³ However, positive results from academic settings are not sufficient to allow commercialization of potential treatments. For this, a drug must pass a stringent and lengthy regulatory process before it can be administered on a large scale to its intended market.

In the US, the drug development pipeline consists of a preclinical and clinical phase, which in total can last 12 years and cost upwards of $2 billion (Figure1).⁴ Preclinical phases take place in animal models and serve to determine the appropriate dose for first in man studies, whereas the clinical phase takes place in human cohorts. Clinical trials serve two primary purposes: to determine if a drug is safe and effective. 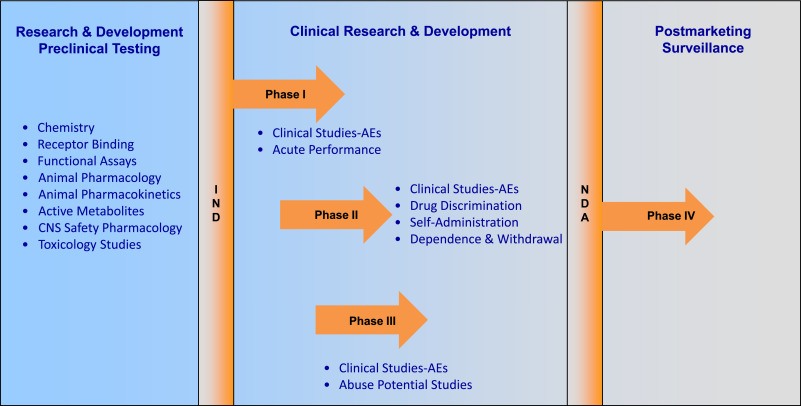 Figure 1. Timeline of the drug development process. Testing starts in the preclinical phase, where substances are tested in animal models to determine drug feasibility and safety. Clinical Research and Development (R+D) is then carried out in human cohorts. Phase I, usually conducted in healthy volunteers, further determines the safety and provides information on the optimal therapeutic dose. Phase II, which is carried out in small cohorts of patients that suffer from the indicated disease, gives insight into the efficacy of the drug. Phase III trials are large trials that confirm safety and efficacy in large patient populations. Phase IV serves as the post-approval phase, which monitors the drug’s use in society over more extended periods.⁵

The US Food and Drug Administration (FDA) is responsible for overseeing the clinical trial process. In the case of psychedelics, a challenging regulatory hurdle exists. Hallucinogens – substances that cause profound distortions in a person’s perceptions of reality and cognition – are classified as Schedule I drugs by the Drug Enforcement Agency (DEA) (Figure 2). Drugs placed in this Schedule are said to have no currently accepted medical use and a high potential for abuse. Scientists who wish to work with substances places in Schedule I must apply for a license from the DEA.

While the cost of applying for a license is reasonable – $125 annually – the time in which it takes labs to receive a permit imposes a significant barrier to research. Researchers such as Ryan Vandrey claim that it took six months for his lab to obtain DEA approval for a clinical trial investigating cannabis as a potential therapy for veterans with post-traumatic stress disorder.  The process of obtaining a license includes meeting with state and federal agents, additional reviews of study proposals, and sometimes buying new safes or security cameras for the research center’s pharmacy. 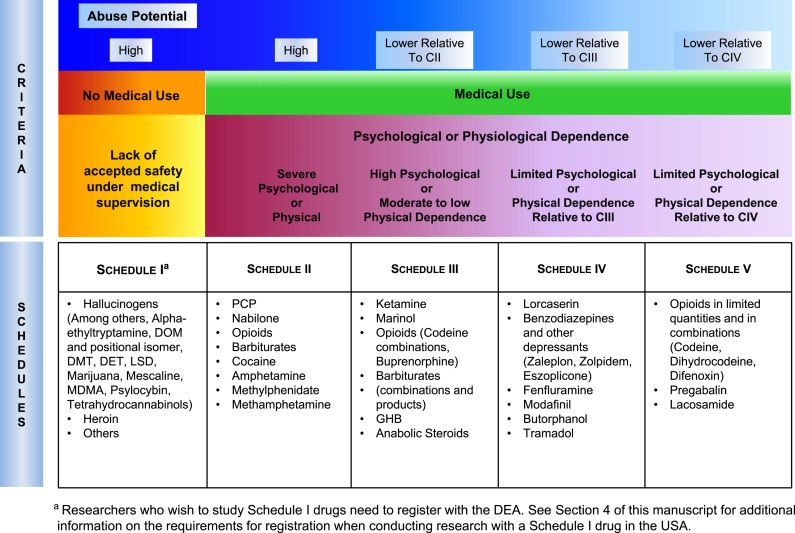 At present, the perceived abuse-potential of hallucinogens is preventing the reclassification of the drug class to a more favorable Schedule. However, researchers from Johns Hopkins Medicine are calling for the rescheduling of psilocybin (one of the psychoactive constituents present in “magic mushrooms”) from Schedule I, down to Schedule IV. Such a reclassification would place the substance in the same category as prescription sleeping tablets. The extensive report outlining the group’s rationale behind the rescheduling can be found in a 2018 paper in the Journal of Neuropharmacology.⁶ Some key points from the report include:

Furthermore, former advisor on drug policy to the United Kingdom government, Dr. David Nutt, outlined in a 2010 report published in the Lancet, that psilocybin is one of the least harmful drugs to society (Figure 3).⁷ The data show that negative aspects of drug abuse, such as damages to the community, crime, and injury, are negligible concerning psilocybin. 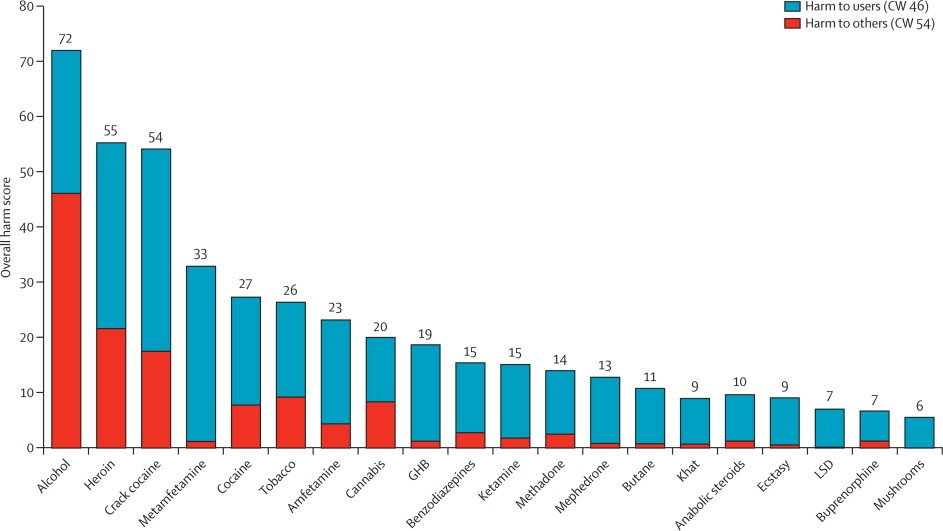 Figure 3. Bar chart showing relative harm different drugs cause to the self and others. The weights after normalization (0–100) are shown in the key (cumulative in the sense of the sum of all the normalized weights for all the criteria to users, 46; and for all the criteria to others, 54). CW=cumulative weight. GHB=γ hydroxybutyric acid. LSD=lysergic acid diethylamide.⁷

It appears that regulators are looking past the scheduled status of psilocybin and instead focusing more on clinical and scientific data. Proof of this is the fact that COMPASS Pathways study of psilocybin therapy for treatment-resistant depression received “breakthrough status” from the FDA in 2018. The FDA awards breakthrough status to drugs that “treat a serious or life-threatening condition and preliminary clinical evidence indicates that the drug may demonstrate substantial improvement on a clinically significant endpoint(s) over available therapies.”

Breakthrough therapy designation is intended to expedite the development and review of drugs.  Dr. Robin Carhart-Harris, a member of the COMPASS Pathways scientific advisory board, predicts that this expedited clinical trial process could see psilocybin become available as a treatment for TRD as early as 2024.

Psychedelics are stuck somewhat in a state of limbo at present. On the one hand, the drug class is still confined to the restrictive scheduling of the Controlled Substances Act (CSA), assigned by the DEA. As long as a drug remains on Schedule I, barriers associated with researching that substance – or using that compound in a federally-legal treatment – are significantly more oppressive than they are for other substances.

On the other hand, regulatory bodies are looking past scheduling and instead focusing on the positive outcomes observed in animal and early human studies. It appears that the political and ideological barriers that sought to prevent the introduction of psychedelics as viable treatment avenue are starting to crumble, making way for policy development based on clinical and scientific facts.