The anatomy and physiology of the brain’s serotonin system remain largely a mystery to researchers. However, little by little, aspects of its structure and function are discovered, sometimes changing long-held biological paradigms. So is the nature and beauty of scientific research.

Recently, researchers at Stanford University used new neuroanatomical methods they developed to determine that the serotonin system in the brain is composed of at least two parallel subsystems working together.1 Their discovery also helps explain the divergent findings other researchers have had in studies looking at the effects of serotonin.

The researchers concentrated their work in an area of the mouse brain called the dorsal raphe. This is the area of the mammalian brain with the largest concentration of serotonin-releasing neurons. The neural cells fan out in a sprawling network of connections throughout the forebrain and control thinking, memory, and the regulation of bodily functions and mood.

The nerve fibers in the dorsal raphe were injected with a virus genetically engineered to glow with bright green fluorescence. This allowed the researchers to visualize the path the neurons took to other areas of the brain. Surprisingly, they observed two distinct groups of neurons leaving the dorsal raphe. The map they created (Figure 1) showed the two subgroups of serotonin-releasing neurons connected to the cortical and subcortical regions of the brain.

Researchers have known the neurons from the dorsal raphe project all over to a variety of places throughout the brain. What was learned from this study is how organized they actually are. 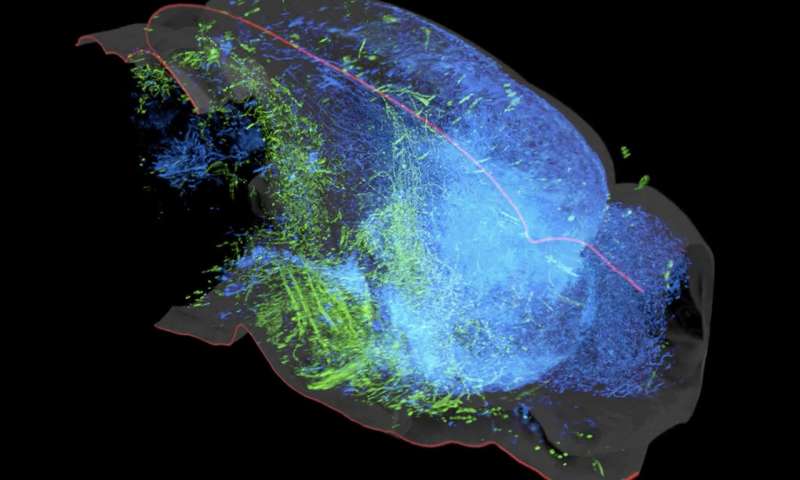 Figure 1: A 3D rendering of the serotonin system in the left hemisphere of the mouse brain. Shown are two groups of serotonin neurons in the dorsal raphe that project to either cortical regions (blue) or subcortical regions (green) and rarely crossing into the other’s domain.1

This study also showed the two subsystems they identified (there are likely more) affect the brain in different and sometimes opposing ways. This helps explain some divergent observations researchers have made in the past. For example, some studies have shown serotonin neurons are activated by punishment, while others showed they are inhibited by punishment. The results of the Stanford study indicate that both conclusions are correct, it just depends on which subgroup of neurons you’re looking at.

The researchers made another interesting discovery. The cells in the dorsal raphe that projected to the cortical regions of the mouse brain were not just using serotonin as a messenger, but also glutamate. This is one of the few known examples of brain cells releasing two different chemical messengers. This finding raises the question of whether these cells should be called serotonin neurons, as they are usually named for the neurotransmitters they secrete.

The findings from this study shed more light on the structure and function of the serotonin pathways in the brain. This could lead to the development of better drugs for treating anxiety and depression by targeting more specific pathways. Greater accuracy may eliminate many of the bad side effects patients currently experience with SSRI (selective serotonin reuptake inhibitor) medications.

Considering psilocybin and psilocin work via the serotonin 5-HT2A receptor, their therapeutic uses also stands to benefit from this increased knowledge.