In a 2014 fMRI study published in the Journal of the Royal Society Interface, data from the brains of human volunteers resulted in ground-breaking and informative illustrations of how communication networks in the brain change under the influence of psilocybin compared to a placebo.1 With the continued and growing interest in psychedelic research, it’s interesting to step back a few years and review this earlier work.

The communication networks in the brain the researchers studied are referred to as communities. These are the sub-network regions of the brain, the neural elements that connect individual areas of the brain together into the brain as a whole. In other words, communities define groups of brain areas that work together. Communities can be small and have specialized functions or larger and associated with general brain and cognitive functions.

Psilocybin Increases Communication Across the Brain

Figure 1 shows the dramatic change in the homological scaffolds (i.e., network communication represented by the colored circular nodes and the lines emanating from them) before and after subjects received infusions of psilocybin. The researchers explained that the fMRI data by itself showed that psilocybin relaxed the constraints on brain functioning, making cognition more flexible. However, when they plugged the data into their homological scaffold model that utilizes the edge measurements, the images in Figure 1 emerged.

What can be seen right away from the data visualizations is that brain communication does not simply become random and unorganized under psilocybin. Some of the original organization of the communication patterns are retained, although they are clearly different from the normal awake state. Also, with psilocybin, there is a lot more cross-linking between areas of the brain that don’t normally communicate with each other while a person is awake. In contrast, the placebo illustration reveals that most of the conversation going on is within the brain networks. 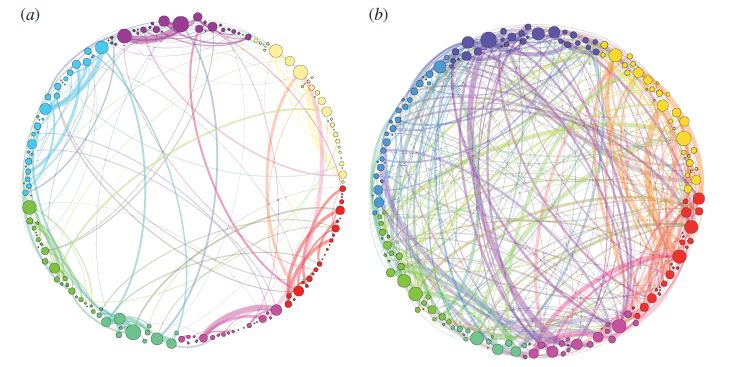 Figure 1: Illustration showing the striking difference between the homological scaffold cartoon pattern resulting from the placebo data (a) and the pattern resulting from the influence of psilocybin (b).1 Each colored node and the links emanating from it represent communication networks between communities of shared functionality in the brain. Notice that in the placebo image (a), most of the communication is within communities. In contrast, image (b) shows hundreds of new connections, mostly between communities, that are created under psilocybin. This increased entropy in the brain allows for a myriad of new connections to form in the brain which may explain synesthesia (and possibly the hallucinations) caused by psychedelic drugs.

An Explanation for Synesthesia?

The research team highlighted the two main results of this study. First, the homological scaffold data showed increased integration between cortical regions of the subject’s brains under psilocybin. This is an important observation because the cerebral cortex contains an abundance of serotonin 5-HT2A receptors (psilocin, the metabolically active form of psilocybin, binds to 5-HT2A and elicits the psychedelic effect).

Second, the cortical integration was supported by a “persistent scaffold” that may be created through the stimulation of 5-HT2A receptors in the cortex. Also, the researchers speculated that the increased communication they observed between areas across the brain may play a role in the phenomenon of synesthesia. In synesthesia, people using psilocybin (or other psychedelics) experience a secondary sensory output from a stimulus, like hearing colors, seeing sounds, or tasting words.

Researchers continue to develop more sophisticated tools for visualizing brain function under the influence of psychedelics. Subjective effects and anecdotal reports are helpful to a degree for understanding the effects of drugs like psilocybin. But, when that information is enhanced up by data visualizations like these showing the accompanying changes in brain functioning, it can result in the validation of hypotheses and moving the science forward to a greater degree.

There remains a critical unmet need for similar studies examining the effects of other compounds found in psychedelic mushrooms (aka magic mushrooms) such as baeocystin, norbaeocystin, and aeruginascin. What would their data visualizations look like? Also, it’s important to remember that the overall psychedelic experience (and potential therapeutic benefits) from magic mushrooms is dependent on which compounds are present, in what quantity, and how they interact with each other at serotonin receptors in the brain (the entourage effect).

For studying the entourage effect, another intriguing experiment would be to see how these homological scaffold illustrations change using specific combinations of doses of mushroom compounds. Is there a further increase in communication between areas in the brain that don’t usually talk to each other? Which ones? How do the subjective effects of study subjects line up with the patterns in the visualizations? What differences are there in the data between people who have a mystical experience with psilocybin and those who don’t? These areas of exploration (any many more) are open to the curious researcher.