What happens when a person lays down and draws their attention away from the outside world? They might think of this as a ‘resting state’ in which neural activity decreases. Researchers considered an alternate proposal upon noticing mental activity in consistent, task-independent areas during the ‘resting state’, activity which was absent during goal-directed behavior.1 Raichle and colleagues referred to these areas as part of the Default Mode Network (DMN), reflecting the presence of a baseline, or ‘default’ level, of neural activity. The following article will discuss the DMN, its relationship to psychedelics, and its role in current and future research.

Researchers used the oxygen extraction factor (OEF) to assert the DMN’s existence in the brain. The OEF is the ratio of oxygen consumed from the blood to local oxygen availability (by means of blood flow).1 Whereas blood flow changes significantly depending on activity, oxygen consumption remains at a nearly constant level. A decrease in OEF represents an increase in blood flow and vice versa. Rather than relying solely on blood flow levels to determine neural activity, the OEF allows for a more comprehensive view of the brain’s energy dynamics.

The OEF in the default mode, or the mean OEF, is typically uniform and constant across brain areas regardless of spatial variances. A decrease in OEF from the mean represents an activation relative to the baseline of neuronal activity, whereas an increase represents a deactivation.

Location and Purpose of the DMN

Key areas associated with the DMN are the medial prefrontal cortex (mPFC), posterior cingulate cortex (PCC) and precuneus, inferior parietal lobule, lateral temporal cortex (LTC), and hippocampal formation.1,2 These areas confirm the DMN’s association with emotion and memory centers, rather than the sensorimotor cortex. These associations are unsurprising, given the correlation of the DMN with introspection, autobiographical memory, daydreaming, and future envisionment.2,3 The high levels of neural connectivity in these regions signify their importance as hubs of information transfer.4

Reframing the initial distinction between the DMN and other areas as intrinsic versus evoked activity, rather than rest versus task, distinguishes the DMN as a communication hub.5 The large proportion of the brain’s energy budget devoted to functional activity, nearing 90%, underscores the importance of intrinsic activity at baseline. Theories propounded to explain the afforded budget include the DMN as an adaptation serving to gather pertinent external information, a necessary tool for future planning, and a foundation for our sense of self.

Understanding how the DMN reacts to self-referential thought processes, rumination, and awareness demonstrates its role as an essential tool in comprehending biological mechanisms for the subjective experience of various psychological states and mental illnesses. Increased activity has been shown in the DMN of patients with schizophrenia, depression, and social phobia, but reduced in autism, Alzheimer’s disease, during hypnosis, meditative states. 3, 6-11

It appears that when activity in the default mode network falls off precipitously, the ego temporarily vanishes, and the usual boundaries we experience between self and world, subject and object, all melt away” 12 – Michael Pollan

The DMN cannot be discussed without considering its influence in the field of psychedelic research. When Carhart-Harris and colleagues originally studied the brain on psilocybin, they expected a flourish of activity where they instead found a significant drop-off, represented by decreased blood flow.13 Recalling from the earlier discussion of OEF, decreased blood flow indicates an increase in OEF, and, consequently, a deactivation from baseline. Concurrently, a decrease in positive coupling between the PCC and mPFC demonstrated possible evidence for a restructuring of the standard hierarchical model of neuronal activity.

Carhart-Harris returned to the idea of a restructured neural model in his theory of entropy and the return to the “primary state.”14 He theorized that psychedelics instigate highly disordered states, or states of high-entropy, by facilitating the collapse of the normally organized DMN and a decoupling between the DMN and medial temporal lobe (Figure 1). This returns the brain to a regressive, unconstrained state of cognition, or “primary state,” allowing exploration into latent thought and an insight into the unconscious mind.

Unconstrained thought can result in unexpected connections between brain networks. Considering the DMN’s association with metacognition and self-relevant thought, it is not difficult to see the link between a drop-off in the DMN’s activity and a phenomenon such as ego death, which is frequently experienced under the influence of psilocybin. 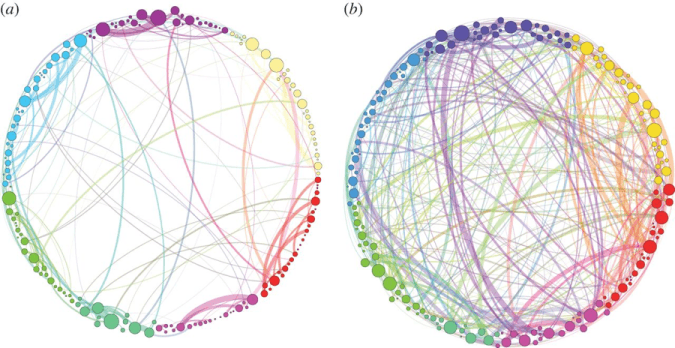 Figure 1: Comparison of structural connectivity between neural nodes in the normal state (a) and the psilocybin state (b).15 This is an example of psilocybin use resulting in high entropy (disorder) and reorganization of the brain as it forms new connections.

Not only psilocybin but lysergic acid diethylamide (LSD) and ayahuasca decrease the integrity of and activity in areas of the DMN, correlating with ego-dissolution and altered consciousness.16-18 Decreased oscillatory power and desynchronization in DMN areas, and a  more recently proposed association between the DMN and the claustrum, represent additional mechanisms linking psychedelics and ego dissolution.19,20

Aside from consciousness, the DMN offers a basis to postulate the biological mechanism for psilocybin’s antidepressant effects. Two possible explanations are the serotonin 5-HT2A receptor and resting-state functional connectivity (RSFC).13,21 Following suit from the theme of positive effects of disintegration, decreased activity in the mPFC via 5-HT2A receptor stimulation may counteract the brooding, pessimism, and depression associated with an overactive mPFC.

Counter to this logic, increased DMN RSFC one-day post psilocybin treatment was predictive of later treatment response. Carhart-Harris likened this response to a ‘reset’ or normalization of acutely lowered RSFC similar to that seen after treatment with electro-convulsion therapy (ECT). This theory, and the research upon which it is speculated, is not entirely consistent within the literature and would benefit from future research along its lines.

The DMN’s suggested role in self-referential thought can further the study of psychedelics, the understanding of mental illness and psychological states, and the interplay between the two. Examples of this interaction are the study of the DMN as an explanation for the effect of psychedelics on increased exercise performance, and the study of psilocybin-assisted mindfulness training modulating self-consciousness and DMN connectivity with lasting effects.16,22

This serendipitous discovery led to and continues to shed light on, insights about consciousness and the mechanisms through which psychedelics influence brain chemistry and the relevant conceptualization of the ego. Whether explaining psychedelics as a therapeutic agent or garnering basic knowledge about psychological states and conditions, the DMN has proven useful to researchers across many domains.

I’m trying to understand the difference between the temporary loss of ego while engaged with psychedelics & the “witness consciousness” referred to in Jay’s video. Where the loss of the DMN is optimal in one, the importance of witness consciousness to guide oneself particularly during a “bad trip” seemed crucial.