The claustrum is one of the most enigmatic structures in the brain. This thin sheet of subcortical neurons is noteworthy in that it is connected with almost all cortical areas, including motor, somatosensory, visual, auditory, limbic, associative, and prefrontal cortices. Additionally, it receives neuromodulatory input from subcortical structures.1,2

Fifteen years ago, Sir Francis Crick (co-discoverer of the double helix structure of DNA) and Christof Koch, Chief Scientist at the Allen Institute for Brain Science, published an influential review making an argument for the claustrum as the ‘seat of consciousness’, driving a renewal of interest in the brain structure.2 In this paper, the pair suggested a function for the claustrum in binding information to generate the conscious experience.

Brain Networks and the Claustrum

Due to the nature of its connectivity and neuromodulatory input, the claustrum aids in the differentiation between task-relevant and task-irrelevant information, allowing the organism to ignore irrelevant information and proceed with goal-oriented behaviour.3,4 In particular, the claustrum has been linked to brain networks implicated in attention; the default mode network (DMN) and task-positive networks such as the Central Executive Network (CEN).5

Similarly, recent findings suggest that psilocybin alters the integrity of and coupling between large-scale brain networks, including the DMN as well as sensory and executive control networks.6-9 This observation has led to the hypothesis that psilocybin may modulate claustrum function in humans. 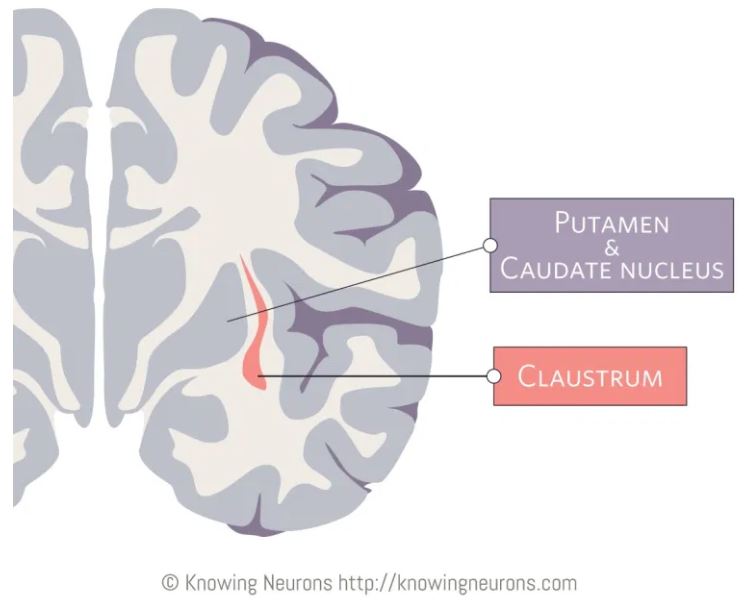 Coronal plane section of the human brain showing the location of the claustrum on one side. Image from https://knowingneurons.com/2017/04/06/claustrum/

Brain Networks and the Psychedelic Experience

Researchers believe that psilocybin may acutely decrease activity within the DMN, an arrangement of functional connections in the brain that is responsible for introspection and planning.7 The downregulation of the DMN by psilocybin may temporarily lead to increased connectivity between brain regions that ordinarily don’t communicate with one another, corresponding to the subjective experience of “ego-dissolution” and the consequent generation of new perspectives and insights.8

The observations that psilocybin perturbs the same brain networks that are functionally connected the claustrum implicates the claustrum as a target of psilocybin. Furthermore, the effects of psilocybin are primarily achieved through its action as a partial agonist of the serotonin 2a (5-HT2A) receptor. 5-HT2A receptor protein is highly expressed in the claustrum.12

Findings of the Study

These results corroborate with pioneering psychedelic studies which demonstrated reductions in DMN connectivity and increases in the connectivity of task-positive networks following psilocybin administration.7 However, how this network disruption occurs is unclear. The results of the study by Barrett et al. support the idea that the claustrum may be involved at a circuit-level to exert psilocybin-induced disturbances in both the DMN and task-positive networks.

Given the association of the claustrum with executive and task-based networks and top-down control of action, the authors of the study posit that the claustrum may play a role in subjectively sensed alterations in executive function through modulation of frontal cortical regions with which the claustrum connects.

In conclusion, the study by Barrett et al. supports a possible role of the claustrum in the subjective effects of psilocybin. Moreover, the results suggest a potential mechanism for brain network alterations observed in the psychedelic state by way of aberrant claustrum activity.

Given the network disturbances that underlie neuropsychiatric disorders, including mood and substance use disorders, the broad connectivity of the claustrum indicates this nucleus may play a role in those disease states—disease states in which psilocybin has proven to exert therapeutic relief. The current study underlines the need for further efforts to examine the potential role of the claustrum in therapeutic effects of psilocybin.