Kambô is the common name of Phyllomedusa bicolor, a large, bright green tree frog native to the Amazon. Kambô is also the name of a resin secreted from P. bicolor’s skin, which has the ability to induce an intensely enveloping mind and body experience. Rituals involving Kambô originate from Amazonian tribes throughout Bolivia, Brazil, Colombia, Peru, French Guiana, Suriname and Venezuela (Figure 1). Like ayahuasca, the Kambô ritual has spread around the world, though not without some controversy surrounding the practice. Kambô clinics have popped up in the United Kingdom, Kambô is practiced in Brazil by the Santo Daime and União de Vegetal (UDV) ayahuasca religions, and it can be found in neoshamanistic practices throughout the Western world.1 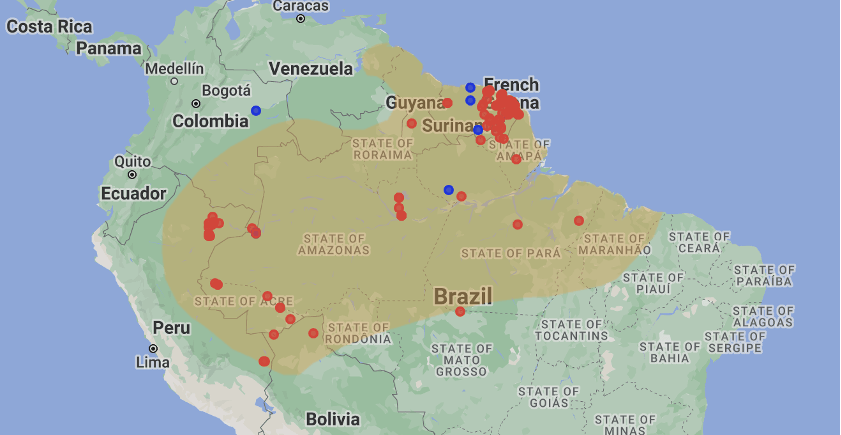 Kambô is also known among various groups as “sapo”, “kampu”, “dow kiet”, and “vaccino de floresta”, and is used for spiritual, medicinal, and social reasons.2 Traditional uses of the substance include purification of the body and mind from negative energies, treating ailments such as snake bites and malaria, and to rid the body of “panema”, a depression-like state.3 The Matses people of northern Peru use Kambô in a ‘magic hunting ritual’ that they believe grants hunters increased stamina, endurance, and luck on their journeys.4 Kambô is used in the western world to treat depression, anxiety, addiction, pain, chronic infection, and autoimmune disorders. However, there is currently no clinical data to support any therapeutic benefit of Kambô.5

The Kambô ritual (Figure 2) begins with the capture of a frog, which is then tied off at each limb in an X-shape and placed near a fire. The tightening of the skin and warmth activate the frog’s defense mechanism, i.e. the release of the skin secretion, which humans have co-opted for the aforementioned purposes. The secretion is collected on a stick, left to dry, and the frog is released back into the forest.4

Some traditions involve the offering of Rapé and/or a Sananga tincture before the Kambô is used.6 Rapé is a tobacco snuff made from a mixture of Nicotiana rustica and other medicinal plants from the Amazon, while Sananga is an eyedrop tincture made from Tabernaemontana undulata, which contains iboga alkaloids.7 Once ready, a participant is asked to mix their saliva with the dried Kambô to produce a paste. The Kambô paste is then applied to light burn marks made in the skin. Males typically receive the Kambô on their arm, while females receive it on their calves.8 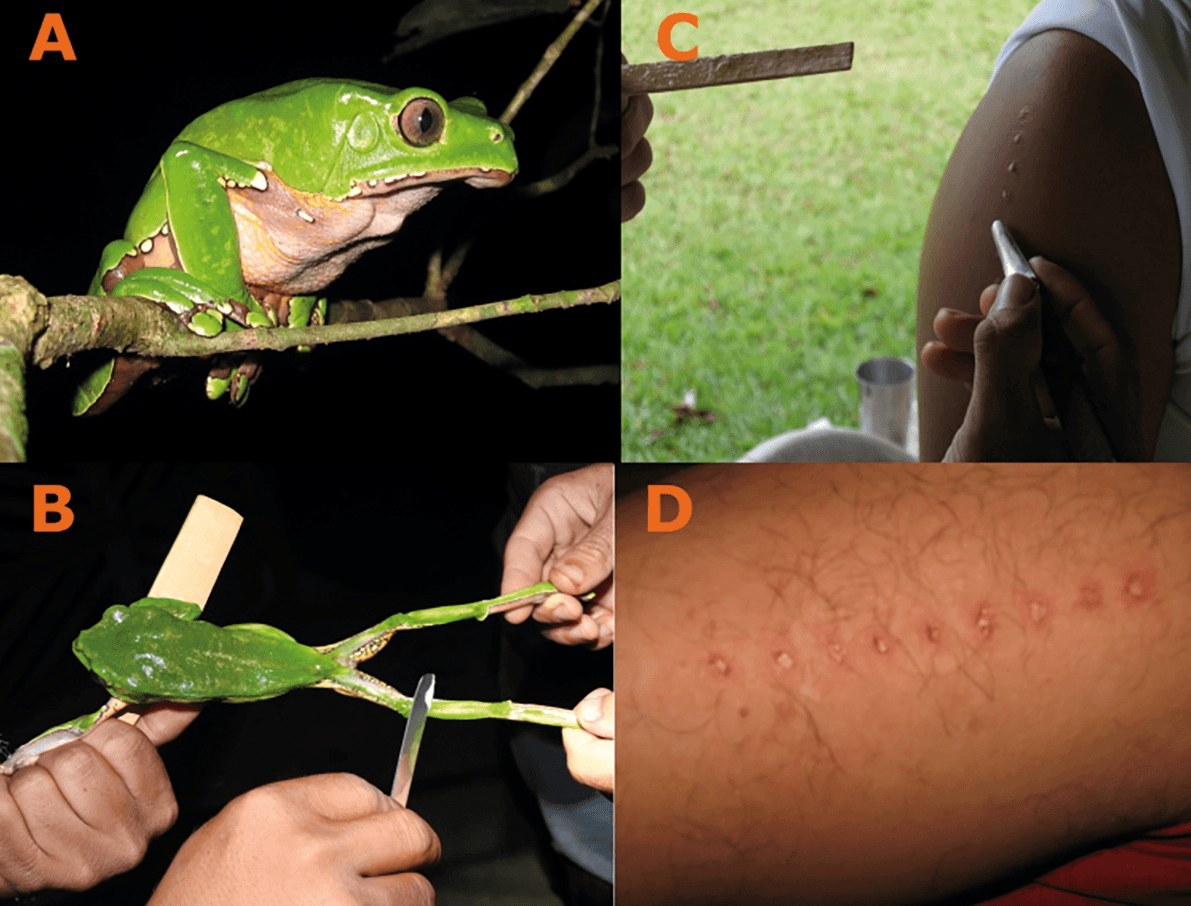 Figure 2: (A) Phyllomedusa bicolor, also known as Kambô or sapo; (B) The frog is tied off at each limb, and its skin secretion is collected onto a stick; (C) Small burns are made in the skin of the participant, to which the dried secretion is applied; (D) The burns are often made in a line or other pattern, and leave scars. Silva FVAD, Monteiro WM, Bernarde PS. Image cropped by uploader., CC BY 4.0 <https://creativecommons.org/licenses/by/4.0>, via Wikimedia Commons.

The extreme visceral effects of Kambô begin immediately. Participants report a sudden burning sensation that spreads throughout the body from the point of application. What follows is about an hour of extremely rapid heartbeat, dizziness, delirium, nausea, vomiting, and an added hyper awareness of these bodily sensations. Once the immediate effects of Kambô abate, recipients often become listless and sleep for long periods of time, reportedly up to a few days.2,9 Once a recipient’s energy returns, they often report feelings of increased strength and endurance, and continued hyper awareness of their surroundings. This is likely the reason the Matses people use this ritual before hunting. These intense effects of Kambô have led to multiple Kambô poisoning cases, and at least one case of death was reported.10

Some of the first reports of the Kambô ritual to the Western world were authored by an amateur journalist named Peter Gorman. Vittorio Erspamer, an Italian pharmacologist credited with the discovery of serotonin, was greatly interested in amphibian-derived compounds and was in contact with Peter for years before the former’s death. Erspamer included an experience of Peter Gorman’s in a publication about the frog secretion4:

The moment the drug is placed upon your skin your body begins to heat up. In moments you feel as though you’re burning from the inside; you begin to sweat…You became aware of every vein and artery in your body…you may feel urges to do things you’ve never done before . You might find yourself growling, barking or moving about all fours. You feel as though animals are passing through you, trying to express themselves through your body.

There are no dreams or visions with `sapo’; you may even wonder what it all was for until you wake, then you are a god. Everything about you is larger than life, and your physical strength is explosive.

The Kambô secretion contains a variety of alkaloids, steroids, amines, proteins and peptides, but none would fall into the category of a classic psychedelic. Although there is little research into the totality of the skin secretion on human physiology, some of these compounds have been studied in isolation and have clear connections to the effects of Kambô.

Phyllocaerulein is a hypotensive neuropeptide that induces relaxation in gastrointestinal smooth muscle, and increases pancreatic and gastric secretions. Phyllomedusin is a tachykinin, which can activate neurons, evoke behavioral responses, contract smooth muscles, induce secretions, and is a potent vasodilator. This compound likely contributes to immediate cardiovascular and gastrointestinal effects. Phyllokinin is a potent proinflammatory agent, and induces relaxation of arterial smooth muscle by targeting bradykinin receptors.6

Kambô also contains dermorphins and deltorphins which have opiate-like activity, likely responsible for sedative effects. Sauvagine affects smooth muscle, and activates the pituitary-adrenal axis by releasing corticotropin from the pituitary gland. This axis is involved in our stress response, and so its activation will induce a stress response. Dermaseptins are peptides with strong antimicrobial, antiviral, and antifungicidal activity, with low toxicity to mammalian cells.6 Recent studies have demonstrated that dermaseptins specific to P. bicolor have antitumor and antiangiogenesis activity in vitro and in vivo.11

Applications and Therapeutic Potential of Kambô

As stated, there is no clinical data on the therapeutic properties of Kambô. The evidence that does exist for its therapeutic effects are anecdotal reports from traditional and modern usage. Reports from traditional use of Kambô include “purification”, treatment of depressive states, and to increase stamina and resilience to stressors.9 Modern users report spiritual and psychonaut reasons for trying Kambô, as well as to treat cognitive and mood disorders, chronic pain, and autoimmune disorders.3,5 With increasing use of Kambô, there have been many case studies published linking Kambô use to such ailments as diuretic hormone dysregulation, kidney failure, dermatomyositis, esophagus rupture, psychosis, hepatitis, and death.10

Kambô is a potent molecular cocktail with powerful and sometimes dangerous effects on human physiology. Its use in traditional and modern contexts suggests Kambô could treat and enhance aspects of body and mind. However, this topically-applied secretion is relatively understudied. Further research should include analysis of the complex profile of peptides in the mixture and clinical research to assess the dosing, safety, and therapeutic potential of Kambô.

Tyler is a Ph.D. Candidate, honeybee researcher, and author of the psychedelic science newsletter The Tab.