In recent years, compounds that act as agonists (aka activators) at the serotonin 2A receptor (5-HT2A) have emerged as a prominent therapy for several disorders including depression, obsessive-compulsive disorder (OCD), anxiety, and addiction.¹⁻³ The recently discovered therapeutic effect of psychedelic agonists has led to a reevaluation in the way these compounds are perceived in the medical sphere and amongst the general population at large.

One recently identified therapeutic characteristic of psychedelics that holds notable promise is their anti-inflammatory effect.⁴ This article explores the anti-inflammatory effect of psychedelics – thought to be mediated through 5-HT2A activation – and how this effect pertains to disorders of the central nervous system (CNS) and other, more recently identified indications.

Inflammation is generally defined as an endogenous repair or host defense mechanism in response to a biological or physical insult. The inflammatory response aims to eliminate invading agents and facilitate healing. This response not only initiates an acute defense against damaging agents but also contributes to the renewal of normal tissue functioning following a harmful occurrence. Within minutes to hours of a biological insult, the body initiates an innate immune response. This response acts by recruiting immune cells to injury sites and promotes inflammation through cytokine release. Some of these cytokines include Tumour Necrosis Factor – Alpha (TNF-α) and Interleukin 6 (IL-6).

Researchers have established that inflammation plays a vital role in the pathophysiology underlying psychiatric disorders such as depression.⁵ For example, the introduction of the pro-inflammatory cytokines TNF-α and IL-1β into healthy animal subjects generates behaviors similar to social withdrawal.⁶  A meta-analysis examining the connection between inflammation and response to depression treatment found that antidepressants lower IL-6 levels, regardless of treatment outcome.⁷ Furthermore, the same analysis found that increased TNF-α levels are associated with treatment resistance and that treatment non-responders display higher baseline inflammation levels.

Psychedelics and the 5-HT2A Receptor

Where do psychedelics fit into this inflammation scenario? Several psychedelic compounds such as psilocybin, initiate the psychedelic state through the activation of 5-HT2A.⁸ Activation of this receptor is thought to acutely reset resting-state functional connectivity (RFSC) to healthy networks to rapidly alleviate depression.

However, some research groups posit that the long-lasting effects of psychedelic-assisted therapy are a result of reduced neuroinflammation. 5-HT2A activation is thought to mediate this reduction in neuroinflammation. However, to build a case for this claim, the focus must shift from the CNS to more peripheral locals.

While HT2A is found in high densities extensively throughout the CNS, it is also present in peripheral tissues. These include but are not limited to, endothelial, muscle, endocrine, and immune tissues.  The selective 5-HT2A agonist and psychedelic compound (R)-2,4-dimethoxy-4-iodoamphetamine ((R)-DOI) demonstrated a potent anti-inflammatory effect when administered on rat aortic smooth muscle cells.⁹ Several 5-HT2A agonists have demonstrated significant anti-inflammatory characteristics, including lysergic acid diethylamide (LSD). However, (R)-DOI was effective at levels in the low picomolar range (IC50 concentrations 10–20 pM).

This low IC50 means that (R)-DOI has an anti-inflammatory effect at doses far below that needed to produce behavioral effects. Furthermore, (R)-DOI was effective in significantly attenuating  TNF-α induced inflammation and reduced levels of inflammatory cytokine IL-6.⁹ These results may provide an insight into the long-lasting antidepressant effects observed in psychedelic-assisted therapy, as dysregulated TNF-α and IL-6 are associated with the onset and symptomatology of depression (Figure 1).¹⁰ 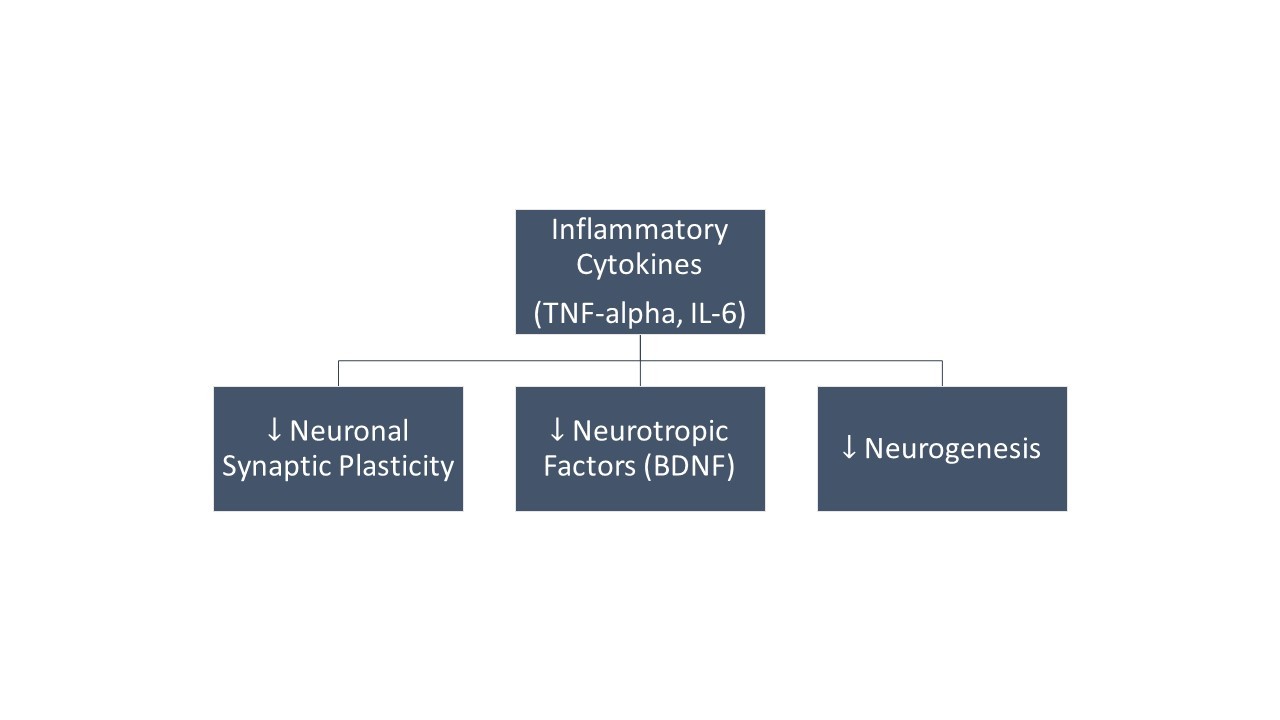 Figure 1: Studies in animal models have shown that increased levels of inflammatory cytokines contribute to the development of depression. These effects are due to disturbed neuronal synaptic plasticity and disturbances in the levels of different neurotrophic factors, in particular, BDNF.  TNF – Tumour Necrosis Factor. BDNF – Brain-Derived Neurotropic Factor. IL- Interleukin.10

Other Indications For Psychedelics and Inflammation

Interestingly, one biotech company has identified a potential therapeutic effect of (R)-DOI for indications outside of the realm of neuropsychiatric disorders, but still involving inflammatory mechanisms.

Eleusis, a clinical-stage life science company, recently funded a study that examined the effect of (R)-DOI  in treating cardiovascular disease.¹¹ Leading the study was Dr. Charles Nichols, son of professor emeritus of pharmacology at Purdue University, David Nichols. Using (R)-DOI, Nichols and his team observed a reduction in aorta inflammation and a decrease in overall and HDL cholesterol levels. The vascular study showed physiological without any psychological effects (this is important because mice given a psychedelic can sometimes show behavior consistent with psychosis).

Nichols told Endpoints news in a recent interview, “Translated into the clinic in humans, it would be as if someone was obese, had diabetes, had high cholesterol, and was able to take a low dose of this drug at a sub-behavioral level and really treat several different aspects of the complications of being obese.”  He went on to add that the study was translatable to a clinical trial, and was optimistic of drug development within 10 to 20 years.

Eleusis has also begun examining the potential therapeutic benefits of (R)-DOI in the treatment of asthma. Early studies demonstrated the prevention of inflammation associated with acute allergic asthma in a mouse model. Treatment with (R)-DOI significantly reduced pulmonary inflammation and improved airway function.¹²

Summary of Psychedelics and Inflammation

Science has only relatively recently begun understanding the significance of inflammation in the pathophysiology of neuropsychiatric disorders. The same is true for the role of 5-HT2A agonists in treating the same class of disorders. Much of the current research concerning the therapeutic action of 5HT2A agonists centers around disorders of the CNS (e.g., depression), with short-term amelioration of symptoms thought to stem from changes in the functional connectivity between specific brain regions.

The recent literature outlined in this article posits that the long-term changes observed following psychedelic-assisted therapy may be a result of the anti-inflammatory actions of the compounds. Moreover, this anti-inflammatory effect may be exploited to treat entirely new indications, such as asthma and cardiovascular diseases. However, the reader must recognize that much of the data presented here are still in very early preclinical stages. Nevertheless, it is not unreasonable to think that in 10-20 years, the anti-inflammatory potential of psychedelics will be unlocked, allowing for their use in a multitude of age-related diseases.

i’ve been doing my own research on THC and increased levels of TNF-A and TF expression. Because THC triggers a response in my body where the sides of my head inflames and so does the inside of my head. I have been a user of cannabis since i was about 15 but i had always been on the treatment Remicade since i was about 12 for RA. Up until only recently as of august 2018 i’ve been off that treatment and once that wore off, the Pro tnf-a effects of THC were starting to affect me in ways i never… Read more »

I have a similar response to THC i am curious about your psychological response to thc now that you know it causes inflammation. I am not sure how this comment section works please get in contact with me if you can so we can exchange information on this subject

I’m looking into giving my mum psilocybin mushroom to combat the chronic neurological inflammation she is experiencing due to radiotherapy she had on a breast cancer metastasis in her brain, she is a doctor herself but weary of drugs due to my previous misuse. On top of this I suspect she is experiencing long covid caused neuroinflamation also, causing speech slurring and low mood.

I need to find Dr. Charles Nichols talk that he gave on psilocybin healing chronic brain inflammation so i can figure out the best protocol.