The news surrounding psychedelic research these days is full of functional assays, receptor binding studies, and clinical trials on compounds including psilocybin, MDMA, DMT, and LSD. Laboratory scientists and psychologists are slowly teasing out the details of the pharmacology and therapeutic applications of these compounds. Psychedelic science has arguably created its own field of expertise for generating, applying, and sharing the empirical information it generates.

A recent study published in ACS Pharmacology & Translational Science takes an interesting turn. It examined the immunological concept of the inflammatory response using several psychedelics, rats, histopathology, and cellular functional assays. As a consequence, the findings have downstream impacts that spill into scientific disciplines other than psychedelics.

The latter observation implies there are two different mechanisms at work. Therefore, by using the 5-HT2A receptor (5-HT2AR) in their study (the one responsible for psychedelic effects), the researchers hypothesized they could segregate the psychedelic compounds based on their ability to cause an anti-inflammatory effect. And, maybe they could observe if there were separate pathways for the behavioral and anti-inflammatory effects.

The study tested 21 drugs that are agonists of 5-HT2AR. They represented the three primary chemical classes of psychedelics, phenylalkylamines, ergolines, and tryptamines.

Flanagan et al. created a rat model (which they validated in the study) to screen the compounds for causing allergic asthma. The did this by sensitizing and exposing the animals over time to chicken ovalbumin via injection. The rats were then exposed to each drug dissolved in saline at a dose of 0.5 mg/kg. The aerosol mixture was administered with a nebulizer. After exposure, the rat’s lungs were removed and fixed for histological examination.

Some Findings of the Study

The researchers assembled a structure-activity relationship (SAR) for the compounds and test data. Analysis of the SAR revealed several significant findings, five of which are summarized below. 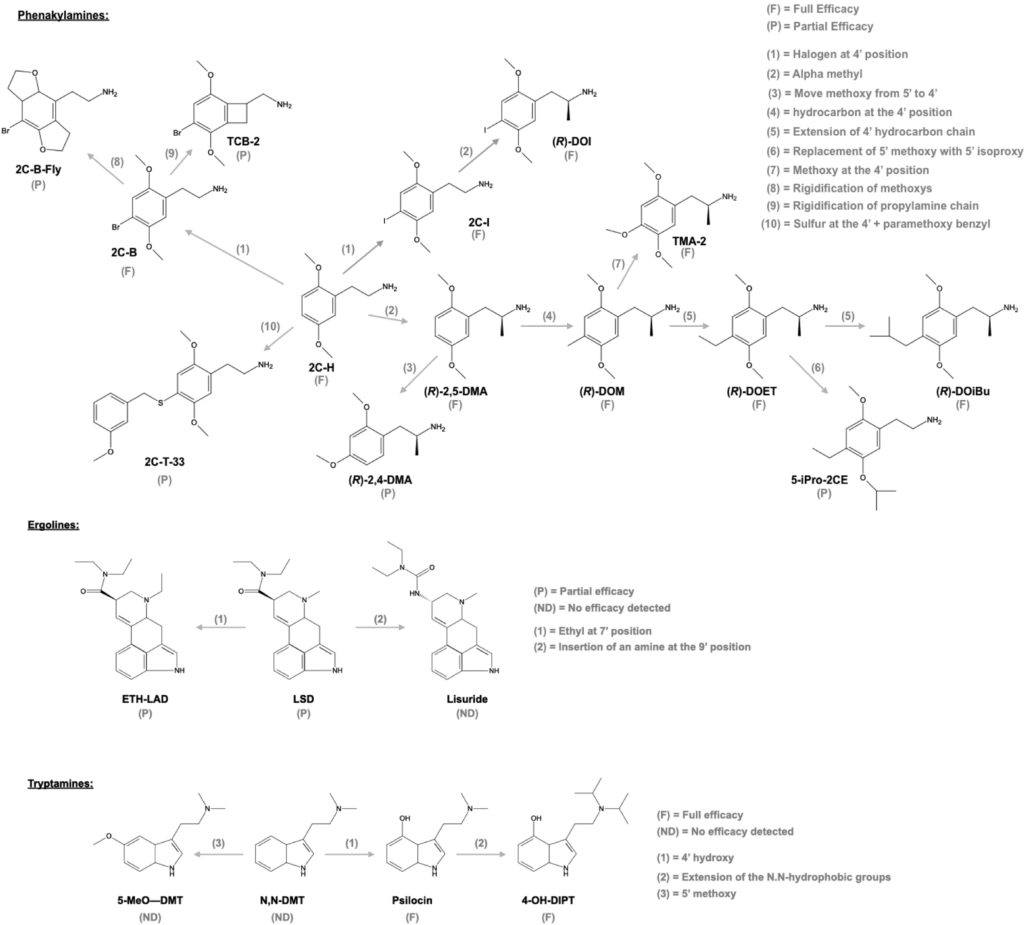 Figure 1: (click to enlarge) Image illustrating the findings from the SAR done by Flanagan et al.1 The phenylalkylamine compounds center around the 2C-H pharmacophore. LSD is at the center of the ergolines and DMT (the least modified tryptamine) is at the center of the tryptamines. The researchers measured each compound’s efficacy by its ability to prevent airway hyperresponsiveness (AHR) in the test animals.

Significance of the Study Results

Creating SARs and identifying pharmacophores present significant advancements that benefit many scientific disciplines. The findings of this study by Flanagan et al. have significant implications in several research areas, including immunology and psychedelics.

Among other applications, scientists can take this information and use it to design anti-inflammatory drugs that don’t have the behavioral effects of psychedelics. The SAR also expands the knowledge base regarding the serotonin 5-HT2A receptor, which is critical for psychedelic researchers.