Creating safe drug combinations and investigating the potential therapeutic effects of psychedelics requires an understanding of the relationship between potency and efficacy. This is also known as the “dose-effect relationship.” Sometimes more attention is paid to the effects of drugs than how much is required to give those effects. Also, it can be a delicate balance between potency and efficacy when it comes to formulating effective drugs with few side effects.

What is Drug Efficacy?

Drug efficacy is defined as “the degree to which different agonists produce varying responses, even when occupying the same proportion of receptors.”1,2 It is commonly expressed in the literature as the “maximum effective dose” or Emax.

Efficacy isn’t just the activation of a receptor by the drug. When a drug binds the receptor or multiple receptors it can produce a complete response, no response, or even a partial response. So, once Emax of a given drug is achieved, giving an increasingly higher dose of the drug will not produce an increase in the magnitude of the effect.1-3 This can be thought of as the ceiling of the response.

For example, in the figure below, Drug A shows a higher Emax (effect) than Drug B when occupying the same amount of receptors. 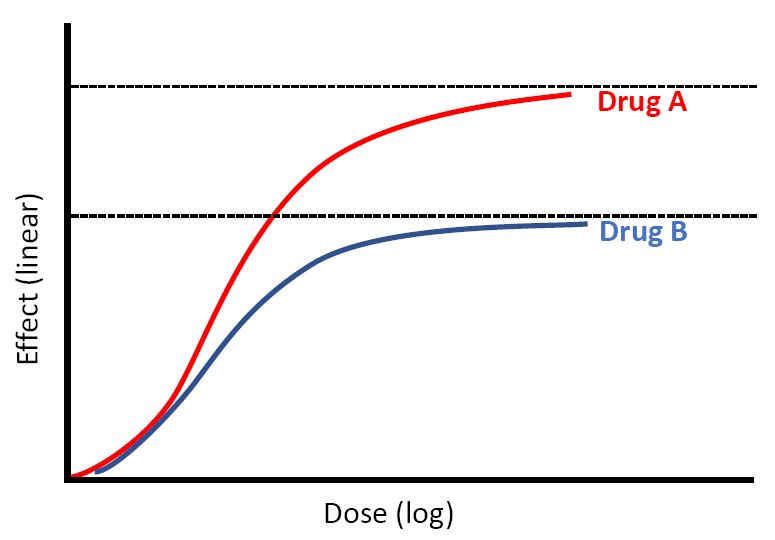 What is Drug Potency?

Drug potency is an expression of the activity of a drug, in terms of the concentration or amount needed to produce a defined effect, which is 50% of the maximum efficacy.1,2 Potency is therefore commonly expressed as the effective concentration (EC50) or effective dose (ED50).

For example, in the figure below, Drug A and B have equal efficacy but Drug A induces the effect at a lower dose., This means that Drug A is more potent. 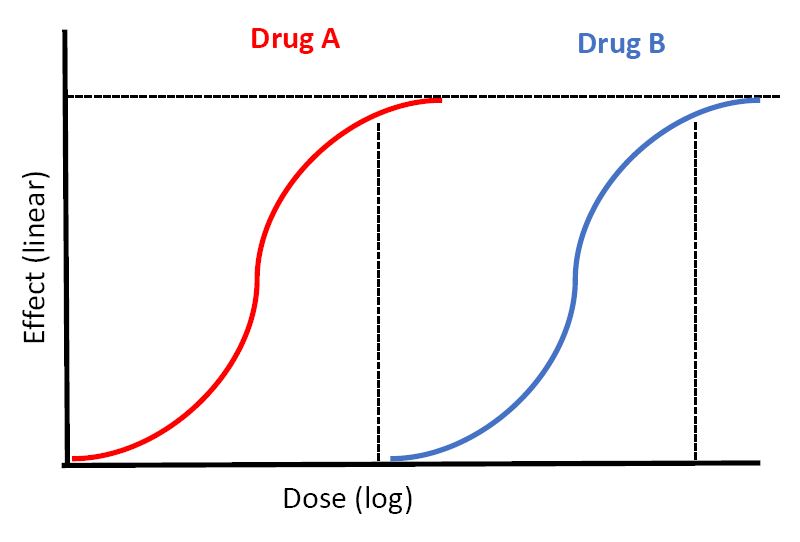 Taken together, potency and efficacy represent the dose-effect of a compound, most often shown as a dose-response curve.3 This type of graph is usually created from data that is generated in functional and behavioral assays that test for efficacy and potency.

For example, LSD and psilocin both activate the serotonin 5-HT2A receptor and cause different effects.4 LSD only requires a very small dose for the user to feel the effects (EC50 = 0.261 µM). In comparison, psilocin is less potent because it takes a higher dose (EC50 = 0.721 µM) to bring on the desired effects.5,6 In recreational use, an average LSD dose is between 50-200 µg, whereas an average psilocybin (a prodrug of psilocin) dose is 2-10 grams.7

In the graph below there are four compounds, each with a different EC50 and the same Emax. The compound at the far left is the most potent. This illustration is representative of the horizontal shifts in potency that are seen across a wide variety of psychedelic drugs. 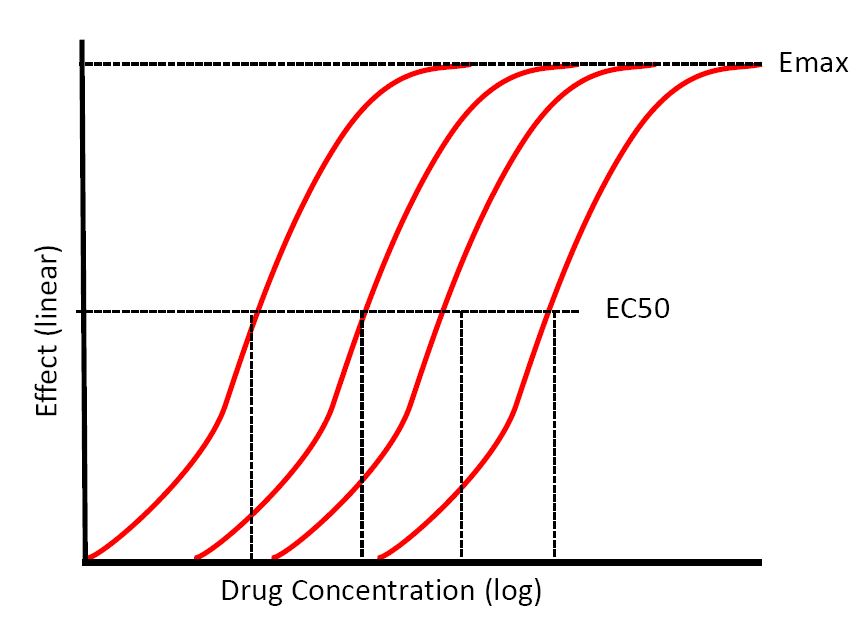 Importance of the Dose-Effect Relationship in Psychedelic Drug Formulations

Psychedelic compounds can have a variety of mix-matched potencies and efficacies. This variability underscores why finding that sweet spot is such a critical step in drug research and development. Other variables like absorption, distribution, metabolism, and drug excretion all play a part in the overall effects of drugs. Determining efficacy and potency helps scientists find doses that are effective but don’t cause unwanted side effects due to high potency. But, the dose-response relationship is just one piece of the puzzle that is essential for discovering potential therapeutic and effective doses of psychedelics.