The potency of drugs is becoming a more frequent topic in studying novel naturally occurring compounds. When creating formulations from nature’s chemical cocktails, scientists need an understanding of more than just the effects each compound has. They also need to know how much of each they need to get the desired results from a formulation. The amounts depend, in part, on each compound’s potency.

Reading psychedelic studies can be challenging. Things get complicated at the molecular level. There are physiological pathways, acronyms, and measuring tiny quantities. Breaking down some of the concepts of drug potency helps with understanding when reading these studies. Here are some of the basics of drug potency.

What Does Drug Potency Mean?

The discipline of pharmacology defines potency as follows:1

An expression of the activity of a drug, in terms of the concentration or amount needed to produce a defined effect; an imprecise term that should always be further defined (see EC50, IC50, etc.).

The acronym EC50 (aka [A]50) quantifies the potency of a compound.2 It stands for half the maximal effective concentration. The EC50 of a compound tells how much of it is needed to give the response that is halfway between the baseline measurement and the maximum effect for a given exposure time.

In other words, EC50 measures 50% of the compound’s maximal response. Another way to look at it is that a drug with high potency causes a strong effect at a low dose. Thus, the lower the EC50, the more potent the drug. The EC50 is the most common measure used in agonist/stimulation assays.

For example, below is the EC50 for three psychedelic compounds at the 5-HT2A receptor. Notice the high potency of LSD compared to the other compounds.

Conversely, IC50 stands for half the maximal inhibitory concentration. This value measures the potency of an antagonist compound.

Another concept in pharmacology, known as efficacy, influences drug potency. Efficacy is defined as,1

…the degree to which different agonists produce varying responses, even when occupying the same proportion of receptors.

The image below illustrates the relationship between potency and efficacy. 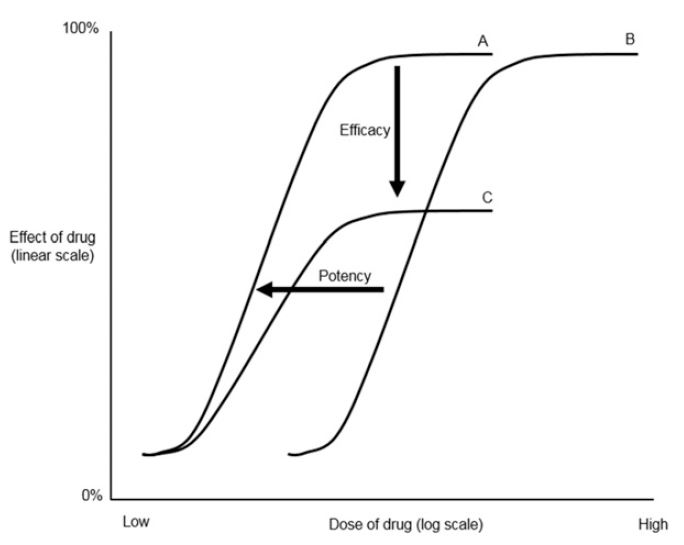 These dose-response curves show the relationship between potency and efficacy.7 The higher the potency of the drug, the steeper the curve and the more it shifts to the left (i.e., a steeper curve corresponds to a lower dose at 50% response). Therefore, Curve A shows higher potency than Curve B. Also, notice that curves A and B have similar efficacy (Emax), but A is more potent. For comparison, Curve C shows a drug with lower potency and efficacy.

Drugs can have high potency but low efficacy and vice versa. Ideally, the most desirable situation is a drug that strikes the ideal balance of these and other variables depending on the application, route of administration, etc. The metabolism, absorption, and excretion rate also play significant roles in the efficacy of drugs.7

But high potency isn’t always a good thing. For example, if a drug is potent in a variety of tissues in the body (it has poor selectivity), it can cause undesirable and sometimes dangerous side effects.

The Potency of Compounds is Critical for Making Effective Formulations

Knowing the potency of psychedelic compounds is essential for formulating effective doses. And not just their potency at the 5-HT2A receptor. The potency of all the compounds in magic mushrooms, for example (when scientists find them all), should be tested on the full spectrum of serotonin receptors. Potency is just one part of elucidating the mechanisms of the entourage effect in naturally occurring compounds. Harnessing the entourage effect allows researchers to make formulations that preserve the benefits of nature’s cocktails while also having pharma’s precise dosing.