5-HT2BR was first cloned by Kursar et al. in 1992.1 It was initially called 5-HT2F because it was cloned from RNA that was isolated from rat stomach fundus. 5-HT2BR holds the distinction of being the only one in the serotonin family that is necessary for life. A study done in 2000 found that mice with a knockout of the gene for 5-HT2BR had severe and lethal heart defects.2 However, the gross morphology of the brain and spinal cord of the mice appeared unaffected.

5-HT2BR is a member of the G protein-coupled receptor (GPCR) family.3 Receptors in this family share a characteristic structure consisting of seven protein helices that span the cell membrane (Figure 1). The helices are separated by alternating sections of the receptor that form intracellular and extracellular loops.

Figure 1: A cartoon representation of a GPCR receptor illustrating the seven protein helices that span the plasma membrane.4

The 5-HT2AR is of great interest to psychedelic researchers. Its activation by psychedelic drugs elicits the psychedelic effect.5,6 Although 5-HT2BR is a different serotonin receptor subtype, researchers have learned that it has many similarities to 5-HT2AR when it comes to the binding of LSD and other compounds. The receptors are so similar in fact, that 5-HT2BR is considered an excellent model system for 5-HT2AR.7 In other words, what is learned by studying 5-HT2BR can shed light on the functioning of 5-HT2AR.

Studies have found that in mammals, 5-HT2BR is expressed primarily in the stomach fundus, gut, liver, kidneys, pancreas.8–12 A moderate expression is seen in the cardiovascular tissues and the lungs. The brain has only limited expression. 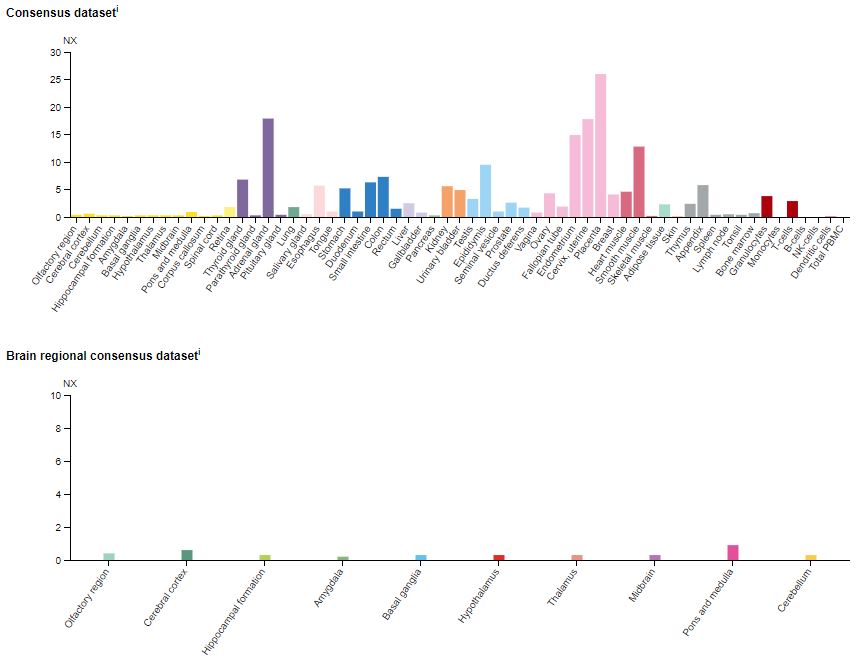 Figure 2: The expression of the 5-HT2BR mRNA in various human tissues (top) and the brain (bottom).13 The data are compiled in the Human Protein Atlas and represent expression profiles from a diverse panel of human cell lines. NX = Normalized expression.

As Figure 2 shows, 5-HT2BR affects diverse systems throughout the body. Its roles include regulation of the central nervous system, cardiovascular functioning, embryogenesis and development, and gastric and intestinal motility (reviewed in Brea et al.).14

The mRNA for 5-HT2BR is expressed in structures in the ear responsible for hearing. The results of a 2006 study in mice found “A significant correlation between gene expression [of 5-HT2BR] and functional hearing results.” 15 Interestingly, upregulation of 5-HT2BR was found in older mice (i.e., they had more receptors) compared to younger ones. This observation was associated with a loss of hearing.

In addition, research indicates that 5-HT2BR may be associated with drug abuse tendencies.16

The Challenges of Activating 5-HT2BR

A 2000 study found that activation of 5-HT2BR in the adult heart led to valvular heart disease.17 Additional work in 2003 indicated that overexpression of the receptor could lead to cardiac hypertrophy and abnormal mitochondrial function.18

The introduction of the appetite suppressant Fen-phen in the 1990s set in motion a series of unfortunate events. These events culminated in, among other things, an important discovery about 5-HT2BR.

In 1997, researchers published an article describing the possible association between Fen-phen and valvular heart disease.19 A few years later, a study found an association between the fenfluramine component of Fen-phen, 5-HT2BR, and valvular fibroplasia in the heart in humans.20 Specifically, the study indicated that fenfluramine and its active metabolite norfenfluramine were agonists of 5-HT2BR.21 This “off-target” activation of the 5-HT2BR by the appetite suppressant caused valvular disease and other heart issues.

In light of this discovery, experts urged pharmaceutical companies and regulatory agencies “to screen candidate drugs and their major metabolites at 5-HT2B receptors comprehensively before launching clinical trials in order to prevent “fen-phen”-type disasters.” 22

The Role of 5-HT2BR in the Psychedelic Effect

Based on experimental data, there are some psychedelics with a high affinity for 5-HT2BR (to learn more about receptor affinity values, see the PSR article Binding of Psilocin and Psilocybin to Serotonin Receptors). For example, the Ki for psilocin at cloned human 5-HT2BR is 4.6 nM.23 In 2013, Dr. Daniel Wacker and his research team reported that LSD had a Ki of 3.7 nM at the cloned human 5-HT2BR.24

So, is the activation of 5-HT2BR part of the psychedelic effect?

PSR reached out to renowned psychedelic researcher Dr. David Nichols for his thoughts on this question. Based on what is currently known about the pharmacodynamics of psychedelics, Dr. Nichols commented,

Although some psychedelic compounds have a high affinity for 5-HT2BR, Dr. Nichols’s theory is correct based on the current scientific evidence. But scientific theories are dynamic. They are constantly changing and redefining themselves based on new discoveries and the best available evidence. Further research is needed to better understand the behavior of psychedelic compounds at 5-HT2BR.

From the standpoint of receptor abundance, the minimal expression of 5-HT2BR mRNA in the brain does not necessarily mean the receptor has no influence on the psychedelic effect. In their highly cited 1999 review paper, Barnes and Sharp stated,

…the picture emerging is that of a distribution of 5-HT2B mRNA and its protein product [in the brain] which is very limited (relative to 5-HT2A and 5-HT2C for example) but potentially of functional importance.

Who is Studying Psychedelics and 5-HT2BR?

Psychedelic research on 5-HT2BR isn’t completely swept under the rug, however.

In 2017, Wacker et al. solved the crystal structure of LSD bound to 5-HT2BR.7 This work advanced the knowledge about why the effects of LSD last so long and the signaling pathways it activates. Figure 3 shows how LSD looks in the receptor binding pocket. 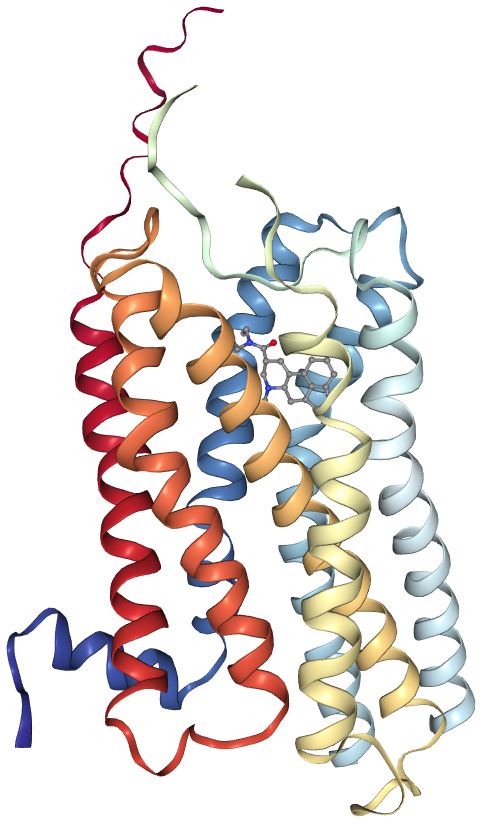 In 2018, a team led by Dr. John McCorvy elucidated aspects of the mechanism of biased signaling (aka functional selectivity) in 5-HT2BR.25 Biased signaling is the term for how some ligands can stimulate signaling via one pathway over another when they bind to GPCRs.26 Understanding this phenomenon may allow researchers to control which GPCR pathways are activated, bypassing those which give unwanted effects.

The research team also identified amino acid residues in the binding pocket of 5-HT2BR that are important for the binding of some agonists and antagonists.25 Taken together, these findings provide valuable insights for drug researchers who seek to avoid activating 5-HT2BR in such a way that it causes detrimental side effects.

At this moment in psychedelic research, 5-HT2BR is receiving some attention from the scientific community. By understanding the pharmacology of this receptor, scientists are learning how they may be able to control it, and thus eliminate the side effects. In turn, this will help overcome the stigma that shadows 5-HT2BR.

Allosteric modulation may influence the contribution each serotonin receptor makes to the overall effects of psychedelics. The behavior of GPCRs is modulated by many things, including neurotransmitters, hormones, and ions.27 In addition to the impact of these physiological influences, psychedelics may also be modulators of GPCR function resulting in an entourage effect similar to the compounds in cannabis. Multiple active compounds from naturally occurring sources set the stage for the entourage effect playing a critical role in making formulations.

This is encouraging and provocative research!!

I’m very curious how the affinity of psilocin for the 5-HT2B receptor might affect the safety of microdosing small amounts of psilocybin over longer periods of time.