In 2016, there were 2.3 billion drinkers worldwide, and the hazardous use of alcohol cost 3 million lives globally, contributing to 5.3% of all fatalities as well as 132.6 million disability-adjusted life years (DALYs), or 5.1% of all DALYs in 2016.1,2 So far, traditional pharmacotherapies such as acamprosate, naltrexone, disulfiram, and nalmefene have shown only moderate success in lowering abstinence rates, signs of craving, or heavy drinking.

In recent years, serotonergic hallucinogens have been gaining traction as potential novel therapeutics for combating addiction, including alcohol use disorder (AUD).3 The cornerstone of psychedelic-assisted therapy rests on the idea that psychedelics can be used as adjuncts to psychotherapy; this combined effect confers higher efficacy than either modality alone for the treatment of mental health disorders, including addiction.4 Not only are classical psychedelics known to induce minimal to no physical dependence, but there is also evidence that they can reduce substance misuse. An “after-glow” effect has been reported that allows individuals with addiction to remain drug-free for a period of several weeks to months after administration of psychedelics, contradicting the idea that these drugs might provoke additional addictive behaviors among susceptible populations.5

An open-label pilot study published in 2015 by Bogenschutz and colleagues showed that participants with alcohol dependence tolerated moderately high doses of psilocybin (21-28 mg/70 kg), and significant reductions in drinking were seen over a 32-week follow-up period.6 A recently published study led by the same first author was the first double-blind randomized clinical trial that investigated whether two administrations of high-dose psilocybin combined with psychotherapy could reduce the number of heavy drinking days in patients with AUD.7

The present study recruited participants aged 25 to 65, with a diagnosis of alcohol dependence as determined by the Structured Clinical Interview for DSM-IV, and with at least four heavy drinking days in the 30 days prior to screening (defined as ≥5 drinks/day for men and ≥4 drinks/day for women). In total, 93 patients were analyzed. All were enrolled in a 12-week manualized psychotherapy program and were randomized to either the psilocybin group or the active placebo group during the two dosing sessions at weeks 4 and 8. The researchers used diphenhydramine (Benadryl) as the active placebo, which is a first-generation antihistamine that induces drowsiness and often used for sleep at low doses, and exhibits its characteristic anticholinergic or delirium-like effects at high doses. The first session involved either 25mg/70kg of psilocybin or 50mg of diphenhydramine, and the second session, 25-40mg/70kg of psilocybin or 50-100mg of diphenhydramine. 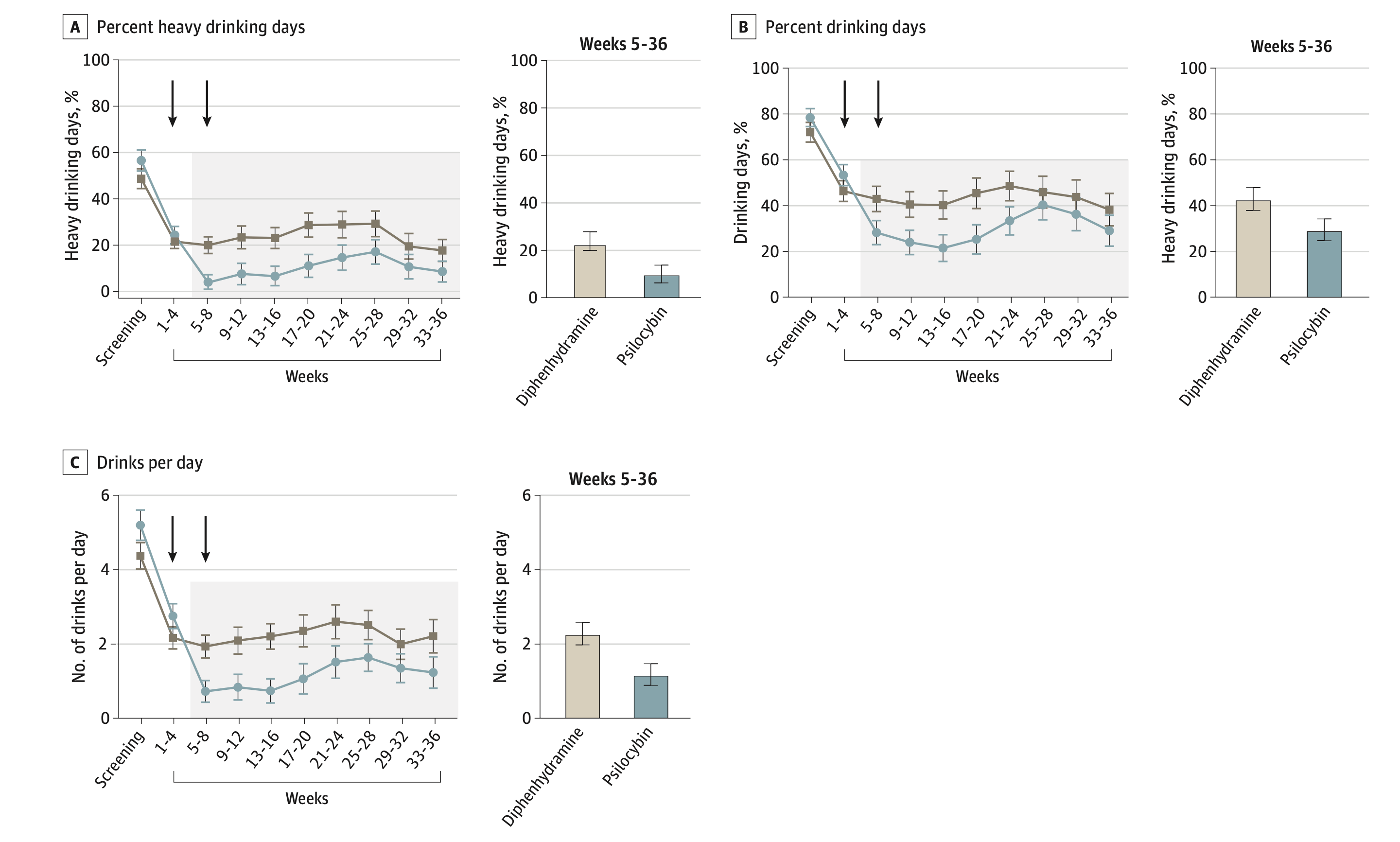 Figure 1: Effects of treatment on drinking outcomes from screening through week 36. Downward arrows point to dosing sessions, at weeks 4 and 8. Significant initial decreases in percentage of heavy drinking days (A), percentage of drinking days (B), and mean drinks per day (C) were observed from screening to week 4 that were sustained through week 36. The treatment condition exhibited statistically greater reduction in all three outcomes (A, B, C) than the control condition from weeks 4 through 36. From Bogenschutz et al. 2022.7

Blinding integrity was assessed following each dosing session, in which participants were asked to guess which drug was administered to them. 93.6% of participants correctly guessed their treatment assignment for the first dosing session, with an average degree of certainty of 88.5%. Correct guesses increased to 94.7% in the second session, with an average certainty of 90.6%. This overwhelming accuracy in identification may suggest an expectancy effect in the context of positive results for the measured outcomes. Given the favorable reputation of psychedelics in recent years, participants’ positive expectations of the efficacy of psilocybin could have been a contributing factor in their sustained abstinence.

The neuroanatomical distributions of the 5-HT2A receptors (5-HT2AR), the main target of classical psychedelic compounds, may serve to explain the behavioral impact of psychedelics. The 5-HT2AR are widely expressed on neurons in the basal ganglia, the hippocampus, and the cortex – particularly on the pyramidal neurons of cortical layer V, regions that play a significant role in memory, attention, perceptual awareness, consciousness, and cognitive control.8 By virtue of psychedelics shifting these parameters, it is plausible that one may drastically change how one relates to their alcohol use in a manner that incentivizes healthy motivational behavior.

More granularly, the metabotropic glutamate receptor subtype 2/3 (mGluR2/3), which are abundantly found in the mPFC and NAc, may serve to mediate drug-seeking behaviors and cognitive flexibility. It is known that long-standing exposure to commonly misused drugs can downregulate the density of this receptor and compromise its function. Therefore, it is an especially relevant target in addiction research. Specifically, alcoholism in rats may induce a persistent decrease in mGluR2 expression, which can lead to behavioral disinhibition with regards to alcohol.5,9

G protein-coupled signal transduction and many downstream second messengers have all been found to be altered by psychedelics. The key action of psilocybin on addiction may lie in the 5-HT2AR desensitization, which results in diminished signaling in its downstream pathways. It has been found that 5-HT2AR and mGluR2/3 reciprocally inhibit one another such that 5-HT2AR desensitization could upregulate transmission via mGluR2/3.5,9 In this way, psilocybin may serve to restore the mGluR2/3 dysfunction, and thus the maladaptive behavioral impulses, rendered by alcoholism.

The results from the present trial demonstrate that psilocybin administration in conjunction with psychotherapy was linked to significant and long-lasting reductions in drinking that were greater than those seen with the active placebo diphenhydramine. In order to validate these findings with an orientation toward introducing psilocybin to the clinical space, the non-profit pharmaceutical company B.More will soon begin a Phase IIB study.

Mengning (Melinda) Wang is a medical student at the David Geffen School of Medicine at UCLA and a research assistant at the Translational Psychedelic Research Program at UCSF, investigating the therapeutic potential of psychedelic compounds for various neuropsychiatric indications.

The Psilocybin vs. Escitalopram Trial – Part 2