Both ketamine and serotonergic psychedelics (SPs) have been studied as novel treatments for depression, particularly Major Depressive Disorder (MDD) and Treatment-Resistant Depression (TRD). Promising results and demonstrated benefits in preliminary research have garnered these compounds much attention. Noted for their rapidity of onset, as well as consistently observed reductions in depressive symptoms and suicidal ideation, ketamine and SPs alike offer hope where traditional antidepressants may fall short.

How do these substances exert such powerful improvements, and could there be a common link between their shared efficacies? A recent study in the International Journal of Neuropsychopharmacology proposes that, while possessing distinct mechanisms of action, a downstream “glutamate surge” may be a point of convergence for these compounds.1 The authors, Kadriu et al., concluded that a transient increase in glutamate may facilitate a chain of events necessary for rapid and sustained changes in neural plasticity, allowing the architecture of brains atrophied by depression to be repaired.

Ketamine’s antidepressant properties have been scrutinized extensively within the last several decades. These results have been consistently promising and offer novel directions for further research. Literature reiterates the potential of intravenous, sub-anesthetic doses of ketamine to remedy a range of mental illnesses, including MDD2 and TRD,3 with similar efficacy in bipolar depression.4 A unique opportunity, ketamine has also been used as a lead compound for developing novel, glutamatergic antidepressants.5 Binding affinities for many receptors and receptor subtypes reveal potential targets for antidepressant drugs. Other NMDAR (N-methyl-D-aspartic acid receptor) antagonists like nitrous oxide, and opioid agonists of the mu and delta receptor subtypes, such as buprenorphine and the experimental ALKS-5461, share the rapid onset and antidepressant activity of ketamine.5 Kadriu et al. The authors speculated that this, too, may be due to the mutual downstream effects of these very different compounds.

SPs like psilocybin and LSD were studied historically, and all scientific efforts were essentially halted with their prohibition by the early 1970s. Consequently, research into SPs remains in its infancy relative to that of ketamine.6 The authors note poignantly that much of this early research is not necessarily translatable or reproducible today. With a 50-year gap in time, evolutions in laboratory technology, analytical equipment, and techniques call into question the relevancy that historical research holds today.

More confounding are the methodological flaws in their experimental design, namely a lack of control groups, randomization, and reporting of adverse events. This renders the results of older psychedelic research difficult to validate. Currently, however, SPs have reached the forefront once again. Like ketamine, they have been preliminarily shown to produce rapid and sustained therapeutic effects following a “brief psychoactive period.”7 For SPs to be considered viable candidates for further research, work must be done to ascertain their safety profiles, so that they may be studied in greater detail, as ketamine has.8,9

Ketamine and SPs are both, most obviously, psychoactive compounds. However, distinct effects and pharmacology have allowed each to be exploited for different indications. As previously mentioned, ketamine has been used particularly as a template to develop novel antidepressants. Consequently, research has been focused primarily on elucidating its pharmacodynamics, rather than its psychoactive effects. Administration of ketamine at sub-anesthetic doses typically doesn’t facilitate profound alterations in consciousness, although subjective effects can occur at lower doses.10

Owing to the great disparities in dosing between ketamine and SPs, subjective effects such as distortions in perception are more commonly observed in trials with SPs. The minimum dose of ketamine needed to facilitate antidepressant activity can be easily assessed, yet it is virtually unknown and difficult to control for in trials involving SPs, as Kadriu et al. note. As a result, research into psychedelics has been focused predominantly on the content of the psychedelic experience and its transformative capacity. “Mystical experiences” encountered during the psychoactive period following the administration of SPs can be used to predict outcomes,11 as experiences of awe increase the magnitude of symptom reduction in depressive subjects.12 This observed correlation appears much weaker in the context of ketamine, likely owing to vastly different subjective experiences.13

As Kadriu et al. remarked, an exciting similarity between these compounds is their downstream impact on glutamate signaling, facilitating a surge that may underlie their shared antidepressant properties (Figure 1). Ketamine blocks NMDARs on GABA*-ergic neurons in the cortical and subcortical regions, causing increased glutamate release and further NMDAR blockade. This facilitates AMPAR** receptor activation in pyramidal neurons of the prefrontal cortex (PFC), allowing for ultimate BDNF*** release. Conversely, upon binding to cortical pyramidal 5-HT2A receptors, SPs directly increase glutamate activity in the PFC. This surge is followed by similar NMDA antagonism, activation of AMPARs, and subsequent release of BDNF. Ketamine and SPs both mediate a “glutamate surge” followed by AMPAR activation and BDNF release. This causes rapid changes in neural plasticity, which may ultimately facilitate the remission of depressive symptoms.

Consistent with this idea, both ketamine and SPs have been found to increase the expression of genes associated with neural plasticity, particularly BDNF. Mice administered ketamine performed better on forced swimming tests as compared to controls, with these results correlating positively with the expression of BDNF-associated genes in the hippocampus.14 Similar genic changes have been observed in the PFCs and hippocampi of mice upon the administration of psychedelics.15 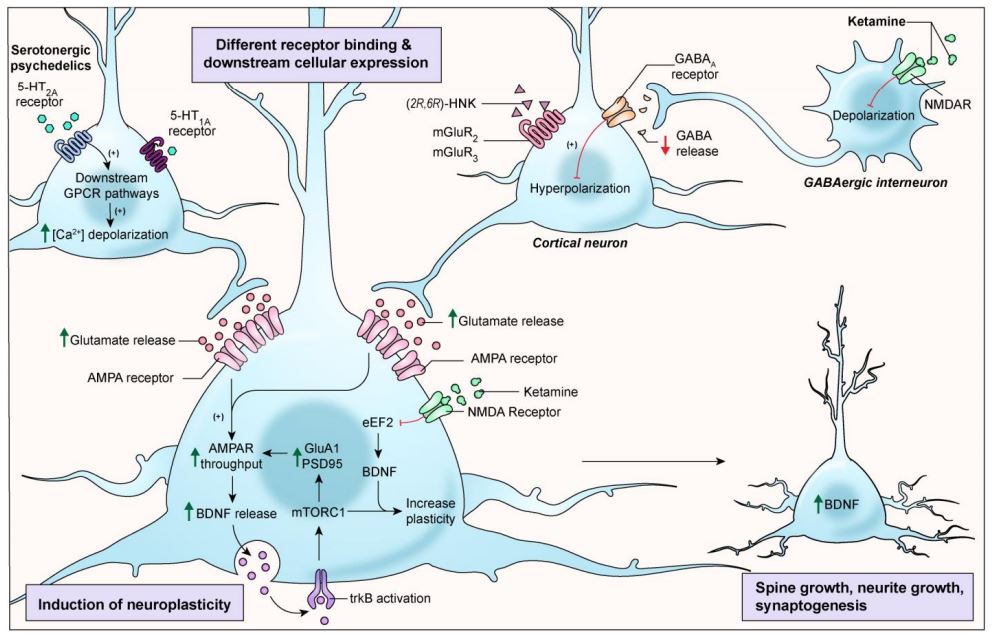 Figure 1: The downstream effects of ketamine and SPs may converge at glutamatergic neurons. SPs bind primarily at the 5-HT2A receptor, whose activation leads to glutamate release and AMPA potentiation. This in turn causes Tropomyosin-related kinase B (TrkB) activation by BDNF and stimulation of the mTORC1 pathway, a major growth regulator in synaptic plasticity. By contrast, ketamine blocks NMDARs on GABA-ergic interneurons, causing disinhibition of their target pyramidal neurons in the PFC. This facilitates a surge in glutamate, enhancing synaptic transmission among glutamatergic neurons and inducing AMPA potentiation. Both ketamine and SPs mediate enhanced neural activity, causing BDNF release and ultimately activation of the mTORC1 pathway essential in neural plasticity. From Kadriu, et al., 2021.

Kadriu et al. concluded that a mutual downstream effect likely exists between ketamine and SPs. In spite of differing pharmacodynamics, ketamine and SPs both appear to enhance neural plasticity in a glutamate-dependent manner through AMPA potentiation and BDNF release. These processes may be implicated in their shared antidepressant activity, facilitating the intracellular signaling necessary to repair and reorganize neural circuitry within the brain. They noted that this research is preliminary and that the “glutamate surge” should be further elucidated. It could enrich our understanding of the cellular and molecular mechanisms underlying neural plasticity, in addition to offering convergent drug targets and accelerating the development of novel treatments for depression.