The Chemistry of 4-HO-MiPT

4-HO-MiPT (Miprocin) is the N-methyl-N-isopropyl analog of psilocin.1 Psilocin is 4-HO-DMT, which is 4-hydroxy-N,N-dimethyltryptamine; whereas 4-HO-MiPT differs by replacing one of the methyl groups with an isopropyl group, resulting in 4-hydroxy-N-methyl, N-isopropyltryptamine (see Figure 1 below). 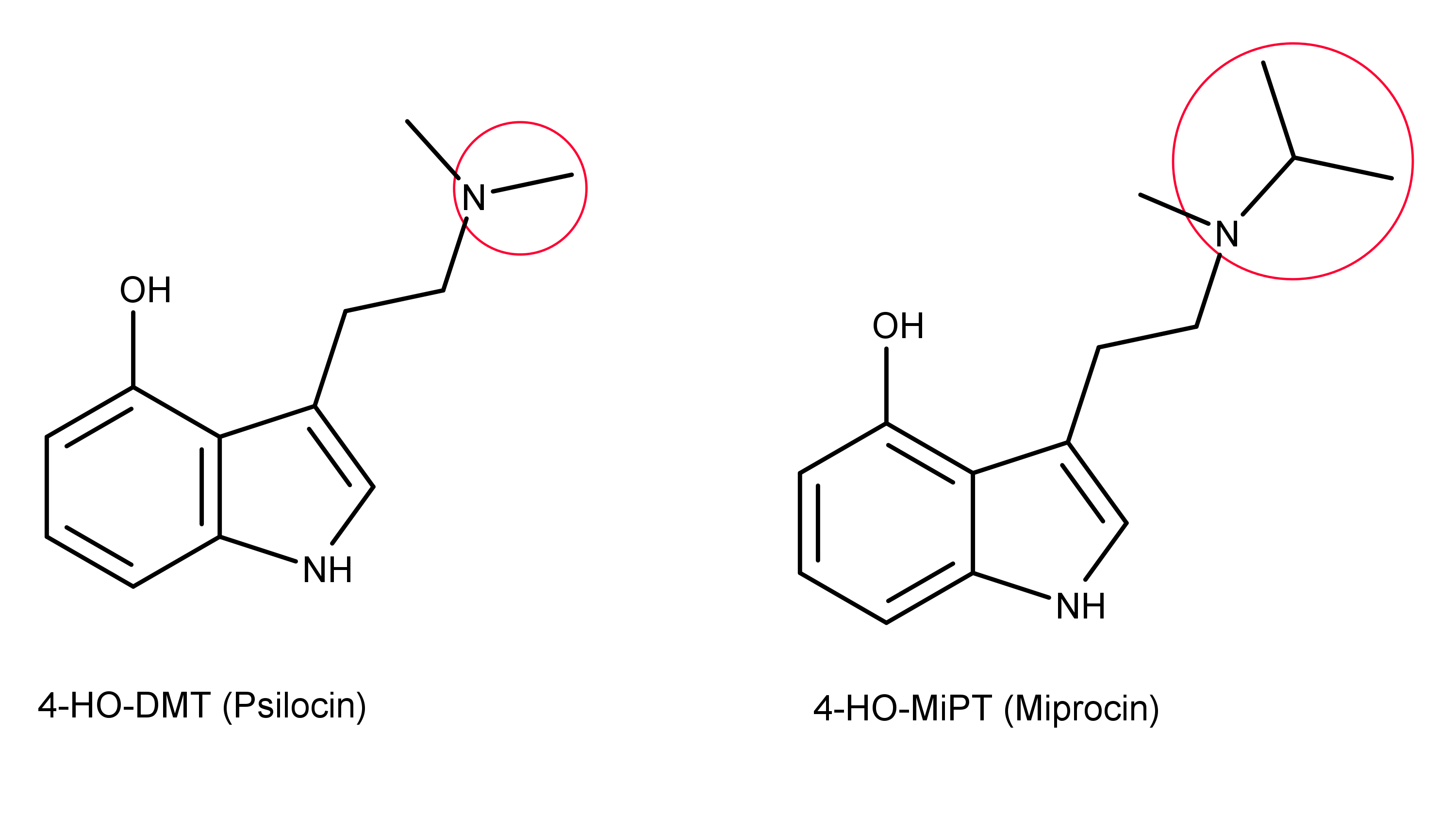 Figure 1: The chemical structures of 4-HO-DMT and 4-HO-MiPT. The red circles indicate the methyl group on Psilocin which is replaced by an isopropyl group to create Miprocin.

In their classic 1997 work TiHKAL, Alexander and Ann Shulgin described 4-HO-MiPT (#22) as follows:1

In 1981, Repke et al. reported the synthesis of 4-HO-MiPT as the free base, which they designated as “compound 15a” in the paper.2 Repke et al. later investigated the pharmacology of 4-HO-MiPT, which is discussed in the next section.

In 2019, researchers solved the crystal structure of the fumarate salt of 4-HO-MiPT.3 In 2020, the same team of researchers reported another crystalline form of 4-HO-MiPT. They synthesized and reported the crystal structure of 4-hydroxy-N-methyl-N-isopropyltryptamine fumarate, showing that the tryptamine moieties were present in a 2:1 ratio with the fumarate dianion.4  The compound may also be described as bis(4-hydroxy-N-isopropyl-N-methyltryptammonium) fumarate.

The Pharmacology of 4-HO-MiPT

A 1985 study done by Repke, Grotjahn, and Shulgin examined the psychomimetic effects of adding various oxygen substituents to MiPT (N-methyl-N-isopropyltryptamine).5 They reported that the 4-HO-MiPT variation was “…the most interesting in terms of overall effect,” being that it is the only analog to have effects similar to the classic hallucinogens.

In 1990, McKenna, Repke, and Peroutka reported that 4-HO-MiPT was more potent at the serotonin 5-HT1A, 5-HT2A, and 5-HT2B receptors than psilocin.6  They noted that the onset of effects occurred about 20 minutes after ingestion, plateauing at 40 minutes. At six hours, the effects began declining and they also observed “residual anorexia and insomnia lasting up to 12 h.” Subjective effects of 4-HO-MiPT in the study included euphoria, heightening of the senses, “multiple images of the same object, which displayed intense colored halos,” intensification and increased separation of sounds, and “flights of ideation [that] occurred with fundamental philosophical overtones.”

In December 2020, Klein et al published in vitro and in vivo data for 4-HO-MiPT as part of a larger work on the structure-activity relationship of psilocybin analogs.7 The team studied 4-HO-MiPT hemifumarate and also the prodrug 4-AcO-MiPT fumarate. The data revealed the following about the hemifumarate salt:

The Applications and Potential of 4-HO-MiPT

Although very little is known about the pharmacology of 4-HO-MiPT, the recent data show that it may offer some advantages over psilocin, the active metabolite of psilocybin. Compared to psilocin, 4-HO-MiPT is more selective for the target receptor (5-HT2A) and less potent at the off-target receptor 5-HT2B. While 4-HO-MiPT has a lower potency in HTR assays, reports from human subjects indicate that it provides an extremely intense experience, “at least twice as active as psilocin.” Taken together, this is the kind of fundamental psychedelic science research that is necessary for creating formulations with certain desired effects (and without undesired effects).