Individual responses to psychedelics are notoriously difficult to predict. At the same dose, it is possible for one person to barely react while another is catapulted into a complex inner world. Predicting the intensity of someone’s reaction in advance would do some obvious good, especially in psychedelic therapy. An underdosed patient may end up disappointed, while one who bites off more than they can chew could become overwhelmed. But what gives some people a greater sensitivity to LSD than others?

A recent study, the first of its kind, looked for answers in our genes. Specifically, they looked at genes that contribute to LSD’s metabolism – even before it reaches the brain.

Let’s follow LSD for a moment as it enters the body. LSD is usually orally administered in research, meaning that participants swallow the entire dose (remember that for later). The LSD will first pass through the stomach and small intestine, like any other orally administered drug. As it moves through the gastrointestinal (GI) tract, it diffuses into the blood, mostly through the intestinal lining. The bloodstream here is a one-way highway to the liver, which is responsible for helping clear foreign molecules from the body (see the illustration below). Before LSD can enter the rest of the bloodstream – and head on to the brain and other organs – liver enzymes will manage to break some of it down into inactive metabolites. 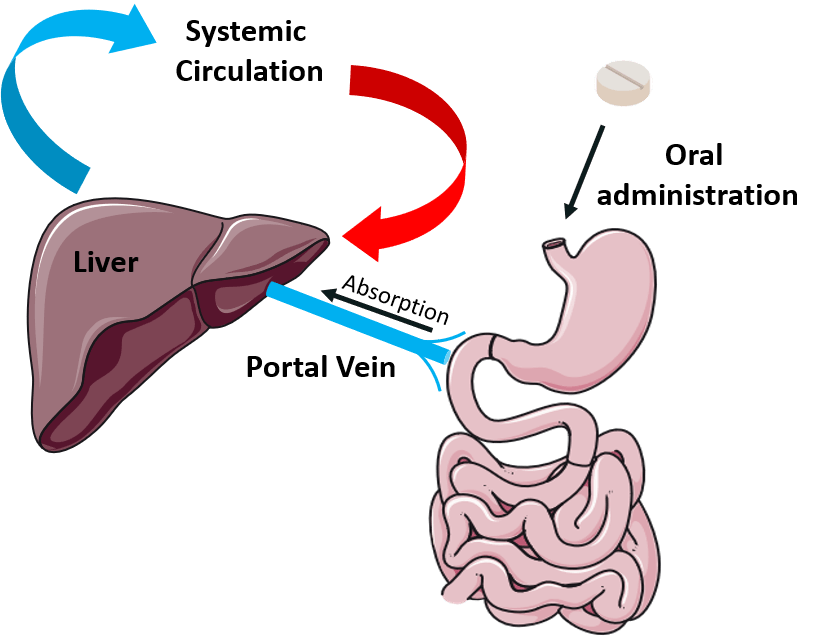 The first pass effect: orally administered drugs enter the bloodstream through the GI tract, then are partially broken down by the liver before entering the systemic circulation. Image made with illustrations from Smart Servier Medical Art.

This is known as the first pass effect, and it significantly reduces the dosage of many orally administered drugs before they enter the systemic circulation. One might think of the liver as a border crossing: each drug that passes through must pay an import tax before being allowed to travel on to other organs. (They can bypass this by sneaking into the bloodstream via nasal, intravenous, sublingual, or other methods of administration). In this analogy, liver enzymes are the border officers collecting payment.

These enzymes, of course, are produced using the blueprints in our genes. And here’s the point: not everyone has the exact same genes for these liver enzymes. Small variations in how they are built can make them better or worse at breaking down various substances. A Swiss research team, pooling data from several different studies on LSD, performed a genetic analysis to figure out whether particular genes coding for liver enzymes make the body better or worse at eliminating LSD – and whether that impacts someone’s trip1.1

Asleep On the Job

The most important group of enzymes for drug metabolism are from the cytochrome P450 family, nicknamed the CYPs (cytochrome P). The researchers investigated several different members of this family which might have significant metabolic activity for LSD, but one stood out as particularly important: CYP2D6.

CYP2D6 comes in many slightly different genetic variants, called alleles. As with all genes, everyone has two copies that may or may not be identical. Some of these alleles are excellent at breaking down foreign molecules in the liver, including LSD. About 3-5% of the Caucasian population has an allele combination that causes highly efficient CYP2D6 activity (it may vary in other populations).1 As LSD passes through the liver of one of these “fast metabolizers”, it is broken down particularly rapidly, meaning that less LSD ultimately reaches the brain.

Some CYP2D6 alleles, however, are asleep on the job. About 5-10% of Caucasians are “poor metabolizers”, meaning they show very little CYP2D6 function.1 Their CYP2D6 enzymes have little or no metabolic activity, leaving all the work to other liver enzymes and filtration systems in the body. When LSD passes through a liver with poor CYP2D6 metabolism, it gets away with paying comparatively little “import tax,” and a higher dose enters circulation.

What does this mean? According to the recently published data, people who are poor metabolizers had about 75% more LSD in their bloodstream than other subjects throughout the duration of LSD’s effects.1 They also experienced more intense, longer-lasting effects compared to people with normal or high CYP2D6 activity. In fact, it seems that their trips were much longer. Normal metabolizers who received a moderate dose (about 100 μg) reached a blood-LSD level of 500 pg/mL about 9 hours after dosing. This approximately corresponds to the maximum LSD level following a dose of 25 μg,2 so by 9 hours, these participants were relatively sober. By contrast, poor metabolizers taking the same dose needed 14 hours to come down to a similar blood-LSD level. LSD’s effect intensity closely mirrors its concentration in the blood,3 supporting participants’ subjective reports that they were tripping for longer.

Knowing a patient’s CYP2D6 genotype might allow doctors to tailor LSD doses more precisely in the future. This may be more important than it first may seem: in the study, poor metabolizers did not experience an equal intensification of all acute drug effects. They experienced disproportionately greater manifestations of anxiety, such as feeling frightened or tormented and fearing to lose control. A similar increase was not seen for the more positive drug effects, like feelings of oceanic boundlessness. This could be down to the fact that, in essence, poor metabolizers received a higher dose of LSD to the brain than other participants did. The higher dose could have been more overwhelming and, therefore, more likely to trigger anxiety. Because anxiety is a negative predictor of psychedelics’ treatment efficacy, especially when intense and prolonged, those with poor CYP2D6 activity may benefit from lower doses of LSD in psychedelic therapy.1

It’s also important to consider that participants swallowed liquid LSD, as is usual in studies and in LSD-assisted therapy. This differs from the common recreational form of administration in which people hold a dosed tab under the tongue, allowing LSD to directly diffuse into the bloodstream via the mucous membrane. This sublingual administration bypasses LSD’s initial, first-pass contact with the liver, meaning that a higher dose reaches the brain. It also bypasses the effect of stomach contents: a heavy meal before swallowing a dose of LSD can delay the onset of effects and reduce their intensity by up to half.4 Genetic variation in CYP2D6 may have less opportunity to affect the initial intensity of the trip when LSD is administered sublingually, though it may still affect the duration.

Lastly, people who are highly sensitive to LSD may also be sensitive to certain other drugs. CYP2D6 breaks down a wide variety of compounds, including opioids, certain stimulants, and most antidepressants5 (psilocin, though similar in its effects, is not on this list; it is primarily metabolized by monoamine oxidases and other enzymes6). And even those with normal CYP2D6 function might become temporarily more sensitive to LSD if they are taking something that impairs CYP2D6 function. Certain antidepressants and other medications,1 cannabidiol,7 and even grapefruit juice8 can significantly inhibit the activity of CYP2D6.

Researchers knew that people’s responses to LSD vary tremendously, and now they know a bit more about why. Inactive alleles of CYP2D6 may be responsible for some people’s high sensitivity, and it likely follows that people with very efficient CYP2D6 enzymes experience reduced effects from LSD. Knowing that this enzyme is involved in LSD’s metabolism also gives us other clues about what affects someone’s reaction to LSD: anything that messes with CYP2D6 might change someone’s sensitivity.

This is important to know because an unexpectedly high amount of LSD reaching the brain may increase the risk of anxious reactions. Genotyping patients before giving LSD in the future could help doctors make sure no one gets a bigger dose than they bargained for.

beautifully written and concrete thank you