The therapeutic potential of LSD for a variety of conditions, including addiction, anxiety, and depression, has been highlighted by several recent placebo-controlled trials.1,2 Although such studies support LSD’s safety over a wide range of therapeutically relevant doses, they generally only include a single high LSD dose. This underscores the need to develop optimal dosing protocols in order to maximize the therapeutic benefits against the potential risks of compounds such as LSD. Importantly, the first modern study to investigate the subjective and adverse effects of LSD over a range of well-defined doses in healthy subjects was published last month in the journal Neuropsychopharmacology.1

The small double-blind, randomized, placebo-controlled trial was conducted by Holze et al. at the Liechti lab, University of Basel, Switzerland.1 It included 16 healthy volunteers (8 male and 8 female, mean age: 29 ± 6.4 years) who underwent six 25 hour-long experimental test sessions, separated by at least 10 days. In each session (given in random order), subjects received either placebo, LSD (25, 50, 100, and 200µg), or 200µg LSD 1h after administration of ketanserin, a serotonin 2A (5-HT2A) receptor antagonist (blocker).

It is becoming increasingly important that psychedelic compounds used in clinical research are standardized and developed according to pharmaceutical standards. Importantly, unlike other groups, Holze et al. confirmed the LSD content and pharmaceutical stability of each dose. Specifically, LSD of >99% purity was obtained and prepared as oral solutions of 25 and 100µg according to a set of regulatory standards called “good manufacturing practice.” These doses were then analytically confirmed using techniques previously used at the Liechti lab.3

As expected, escalating doses administered to healthy subjects led to proportional increases in plasma LSD concentrations (Figure 1). The rate of LSD elimination was proportional to the amount of drug in the body. 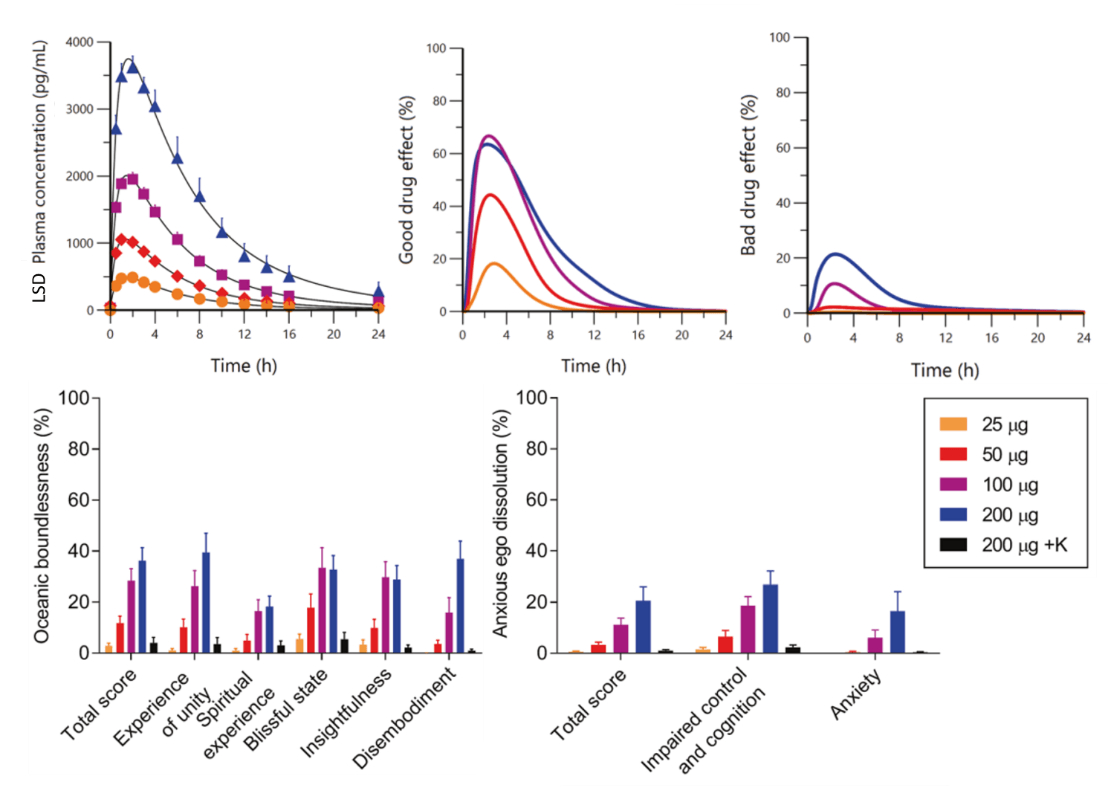 The average duration of self-reported effects increased from 6.7h at 25µg to 11h at 200µg LSD, due to a faster onset and longer duration with the higher doses. Although participants were blinded to the treatment condition in each session, most of them retrospectively identified the LSD dose they had received correctly. Generally, the 100 and 200µg doses were indistinguishable, while 25µg was readily distinguished from the placebo. Holze et al. also evaluated the so-called autonomic effects of LSD, and found moderate increases in blood pressure and heart rate at the high doses, as previously seen.4

In the current study, plasma levels of brain-derived neurotrophic factor (BDNF), a key biomarker for neuroplasticity, tended to be higher post-LSD compared to placebo. However, contrary to a recent Hutten et al. study,5 only the 200µg dose caused a significant increase in BDNF, reaching a peak at 6h.

Importantly, pre-administration of a 5-HT2A receptor antagonist effectively prevented the normal response of participants to high-dose LSD, as previously reported.6 Specifically, ketanserin (40 mg) reduced the subjective effects of the 200µg dose to levels observed following 25µg LSD. Consistent with this, the LSD + ketanserin combination was identified either correctly or as a low dose by participants after the test session. In addition, the 2A blocker appeared to prevent both the autonomic effects and the increases in plasma BDNF normally observed following 200µg LSD.

This pilot study confirms that LSD’s subjective and autonomic effects in healthy subjects seem to be primarily mediated by serotonin 5-HT2A receptor activation. Although encouraging, this study has several limitations, including the small number of healthy volunteers, which likely have positive expectations and some substance experiences, and the highly controlled research (and not therapeutic) setting. Finally, since ketanserin is a high-affinity but non-selective 5-HT2A antagonist, non-specific actions at other receptors cannot be excluded. Nonetheless, ketanserin effectively blocks the effects of high-dose LSD and maybe at the heart of the LSD “neutralizer technology” announced earlier this year.

Based on these results, Holze et al. propose that an analytically confirmed 100µg dose of LSD may optimize the positive drug effects against the risk of acute adverse reactions, making it most suitable for the treatment of depression and anxiety. Indeed, acutely higher Oceanic Boundlessness and lower anxiety ratings seem to predict a better psychedelic treatment response. Finally, Holze et al. hypothesize that although the 25µg “minidose” used here was clearly acutely psychoactive in most subjects, the authors state that LSD “microdoses” (1–20 µg) are unlikely to impair cognition or produce adverse effects.

After the completion of this study, the Liechti lab announced a research collaboration and licensing agreement with the psychedelic company MindMed. MindMed’s co-founder and co-CEO, J.R. Rahn, commented in a press release: “We see this now completed study as an important stepping stone with highly relevant data to support Project Lucy as the team identifies optimal dose levels of LSD to test in the intended Phase 2b trial of an anxiety disorder.”

This is really good research and well overdue.
A great pity there is only one clinic in New Zealand.