Scientists have solved the long-awaited crystal structure of LSD bound to the activated 5-HT2A serotonin receptor (5-HT2AR).1 The discovery reported by Kim at al. in the journal Cell sheds light on how compounds interact with and activate this canonical receptor. 5-HT2AR binding is the key molecular event thought to trigger the vast psychedelic experience and possibly holds broad therapeutic potential.2 That is why these findings are ground-breaking for understanding how psychedelics work.

The 5-HT2A Receptor and its Role in Psychedelic Drug Action

The hallucinogenic effects of psychedelics, such as LSD and psilocybin, are related to their ability to activate 5-HT2AR.3–5 Simply stated this causes neurons in the human cortex to fire in disorganized patterns, inducing an altered state of consciousness referred to as the “psychedelic trip.”

Serotonin receptors belong to an important family of cell surface G-protein coupled receptors (GPCRs). The binding of an agonist causes GPCR activation. This activation releases the intracellular G protein partner (hence the name “GPCR”), which then launches a specific and coordinated biological response inside the cell.

Importantly, small differences in the drug-receptor interaction can translate into significant changes in the observed clinical effect. Therefore, it is essential to precisely visualize and map out how a compound interacts with its receptor at the molecular level.

To achieve this critical visualization, structural biologists used cutting-edge, high-resolution imaging techniques, earning several recent Nobel Prizes in chemistry for their work in 2012 and 2017.6,7. X-ray crystallography measures how X-ray beams reflect off the surface of a drug or protein. Complete crystal structures are the ‘gold standard,’ but they can take years to solve depending on the molecular target’s ease of handling and complexity. Recently, cryogenic electron microscopy (cryo-EM), which literally freezes a molecular event in time, has become a popular and powerful alternative.

Crucial to the Kim et al. work is that the crystal structure of LSD bound to the human serotonin 5-HT2B receptor was reported in 2017.8 Both studies were done at the lab of Dr. Bryan Roth, a molecular pharmacologist and psychiatrist at The University of North Carolina School of Medicine. Because 5-HT2AR and 5-HT2BR are similar in how they bind to psychedelics, the LSD-2B crystal structure provided important clues as to how LSD might interact with the 2A receptor.

However, until now, scientists had been unable to precisely visualize a psychedelic compound bound to the 5-HT2A receptor. Figure 1 shows the crystal structure of LSD bound to 5-HT2AR from the Kim et al. study. 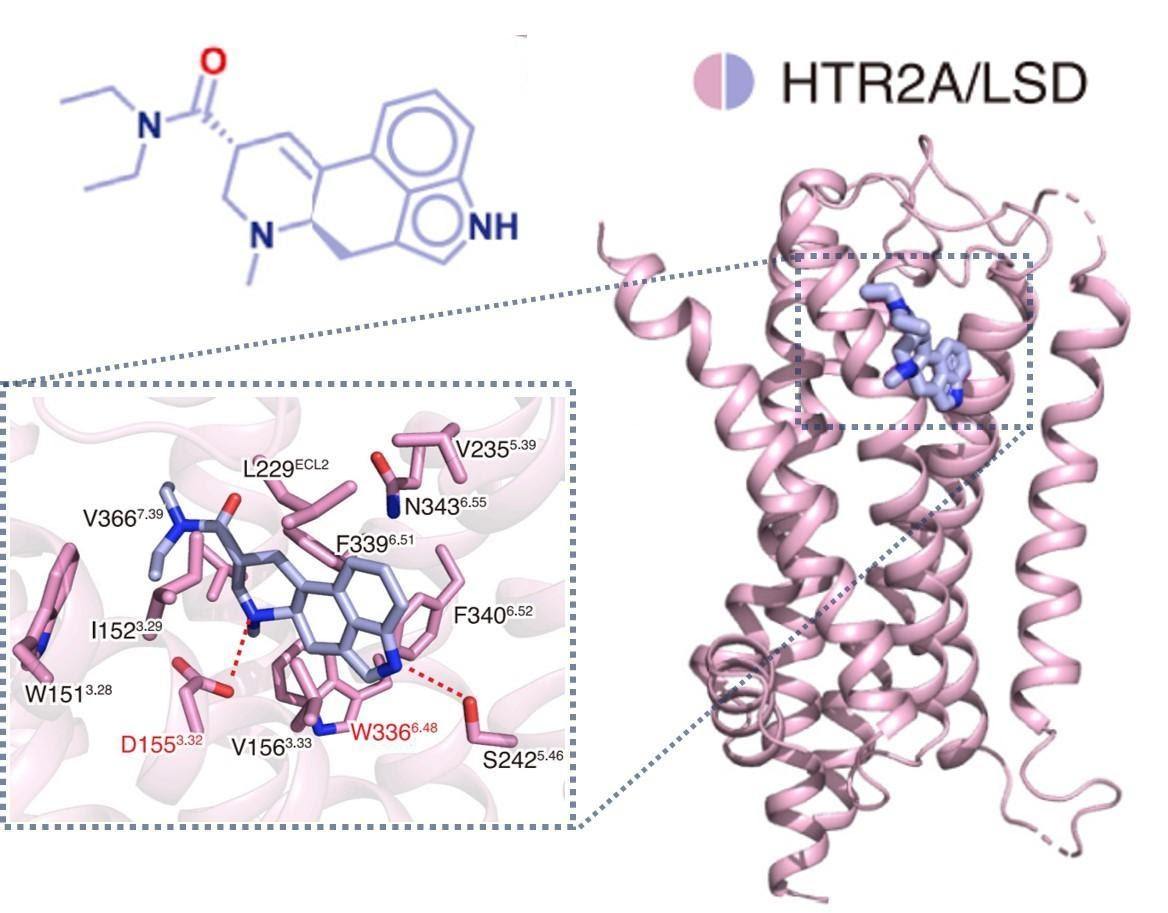 Figure 1: The crystal structure of LSD bound to 5-HT2AR.1 The binding pocket is magnified, showing key amino acids (identified by their letter code and position within 5-HT2AR) involved in the interaction. (Image compiled from figures in Kim et al. and created by Lily Aleksandrova).

Molecular maps such as these reveal unique and shared mechanisms of interaction for each drug-receptor complex. Such insights add another piece to the puzzle, bringing scientists closer to understanding how psychedelics work on a molecular level. These discoveries also provide additional clues regarding strategies for harnessing the therapeutic power of psychedelics.

Stay tuned for Part 2, which takes a deeper dive into what scientists learned from these high-resolution molecular maps.