REBUS and the Anarchic Brain

In 2019, Drs Robin Carhart-Harris and Karl Friston developed a model of how the brain works by conceiving of the brain as an engine that generates predictive models of the world.1 The model is called REBUS, which stands for Relaxed Beliefs Under Psychedelics. Normally, these models are updated by incoming information and, thus, the individual is better able to understand the world. However, the models are often resistant to updating even in the face of undeniable information. This is often due to overly rigid modes of thinking, for example, a drug addict who continues using drugs even when they know they are harming themselves.

Psychedelics, in this theory, increase the entropy present in the brain’s predictive world-model, similar to heating up metal to make it more malleable to incoming force. This allows the brain to be better able to update its internal world-model to be more in line with incoming information, which might explain why psychedelics are useful in treating mental illnesses associated with overly rigid thoughts like OCD.1

In 2016, Dr. Selen Atasoy and colleagues developed another theory for explaining neural correlates of consciousness by looking at connectome harmonics.2 The connectome is a map of neural pathways in the brain. Studying the connectome shows that consciousness might be generated by the synchronous firing of disparate neural subnetworks and the resulting signal propagation across the brain.3 Connectome-specific harmonic waves (CSHW) might therefore provide a biological explanation for the generation of conscious experience in the brain.

Previously, Psychedelic Science Review published an article on a study conducted by Atasoy et al., and another article summarizing Carhart-Harris’ description of the anarchic brain. In this article, another theory of consciousness is examined, and towards the end, common themes in each theory will be highlighted, along with implications for future research.

IIT proposes that a single consciousness is made up of a large collection of ‘concepts’, which are created by specific structures of integrated information. For example, sensory information (the sweetness of an apple, the color red, the crunchy texture) integrating to form the concept of an apple. Biologically, this is analogous to CSHW’s description of many different connectome harmonic patterns interacting with one another to compose a concept, where asynchronous firing in left and right brain regions might underlie perceptual hallucinations in psychedelic trips.3

Harmonic firing in brain regions dedicated to taste for the sweetness of an apple, visual processing for the redness, and tactile sensation for the crunchy texture of the apple, all together form the concept of an apple. IIT states that this phenomenon occurs on a larger scale within the brain to form consciousness. This is called a Maximally Irreducible Conceptual Structure (MICS), much like how CSHW describes global neural harmonic patterns forming the basis of the ego.3 Figure 1 shows a MICS in a sober state, absent of psychedelic influence. 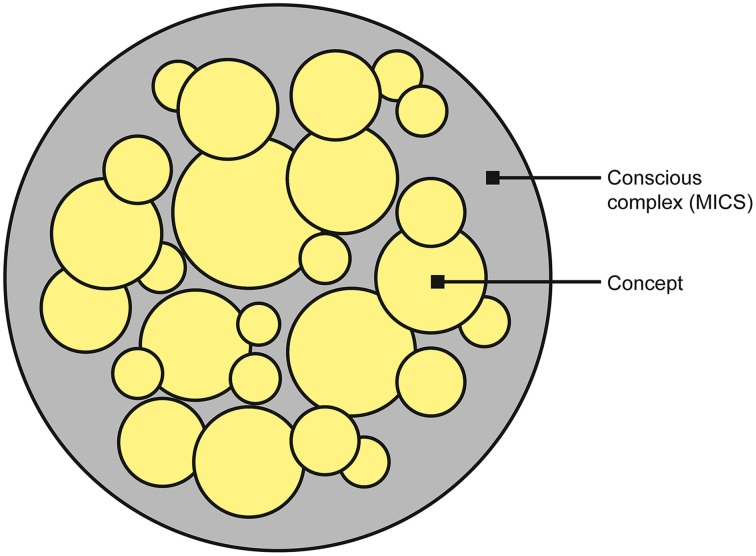 Figure 1: Image illustrating consciousness in the sober state.6  The larger the yellow circles (concepts) the greater the degree to which they are present in the experience. The overall quantity of consciousness is represented by the size of the grey circle. MICS = Maximally Irreducible Conceptual Structure.

The link between the anarchic brain description of neural phenomena ties in here, with both theories describing psychedelics’ mechanism as the introduction of energy to the brain’s information processing system. Figure 2 shows the cause-effect repertoire of a concept in sober versus psychedelic mind-states. 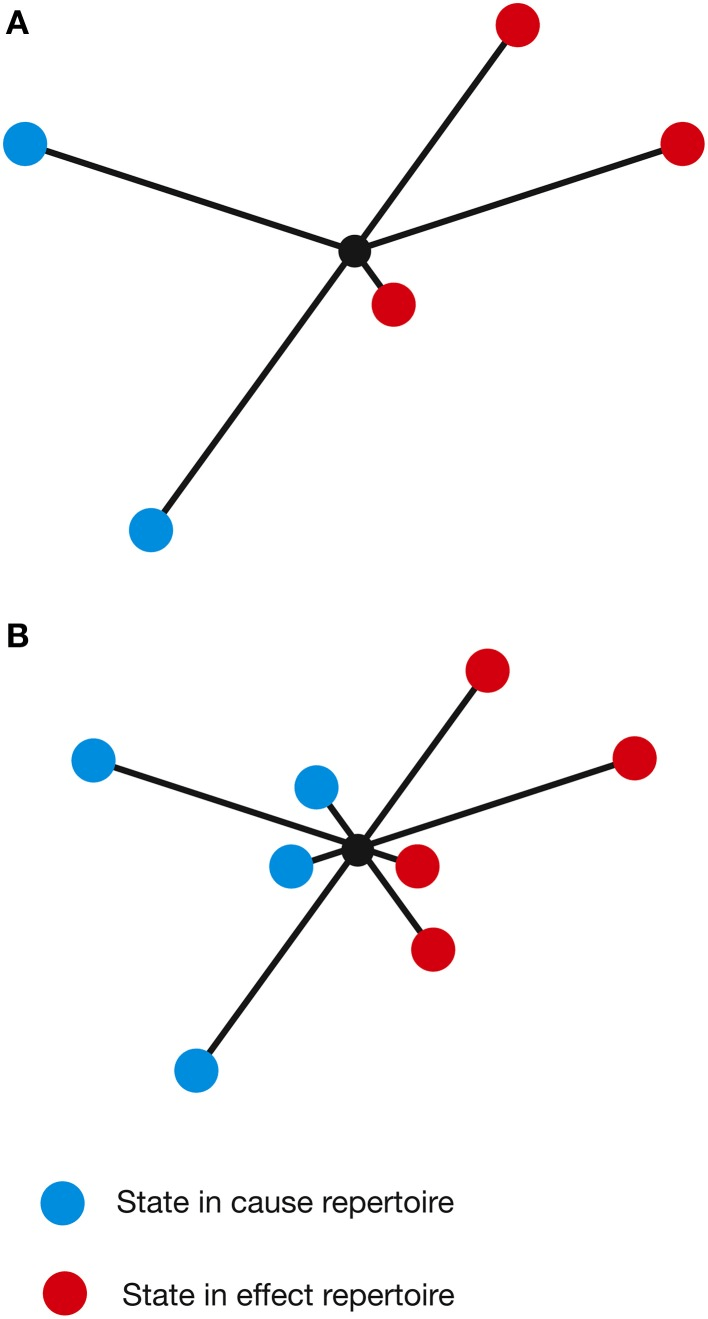 The overlap between certain concepts will inevitably increase, potentially even between those that are not normally related. This might explain why creativity, imagination, and novel thinking are enhanced during the psychedelic state and, more importantly, the potential of psychedelics to trigger psychotic disorders in vulnerable individuals.7,8,9

Viewing psychosis as maladaptive, highly rigid links between concepts, one can think of psychedelics triggering psychosis in individuals by causing certain maladaptive conceptual links. For example, linking “mother” with ”danger” during the psychedelic mind-state, as a result of increased cause-effect repertoires caused by the increased entropy in the system. These conceptual links persist due to their perceived importance to survival (if one’s mother is actually dangerous, one would be well advised to leave the house), even after the trip ends.

The psychotic belief that the person’s mother is a danger to them is now present in the sober MICS that was triggered by the psychedelic-facilitated reorganization of linkages between concepts in the brain.

The CSHW analogue can be observed again here, where Atasoy and colleagues observed a higher number of simultaneous neuronal activation patterns being triggered in individuals tripping than in sober individuals – more concepts being introduced in the harmonic landscape of the brain.3

One prediction of IIT is that cognitive processing in the psychedelic mind-state has some trade-offs compared to the sober mind-state.6 The introduction of more concepts and the additional cause-effect repertoires each concept can have would mean an increase in creativity and mental flexibility. On the other hand, the subject is less able to properly process information due to the increased number of concepts it has to deal with, meaning that engaging in directed thinking and performing simple tasks is impaired. Figure 3 shows a visual representation of the widened conceptual umbrella that psychedelic mind-states experience compared to sober mind-states. 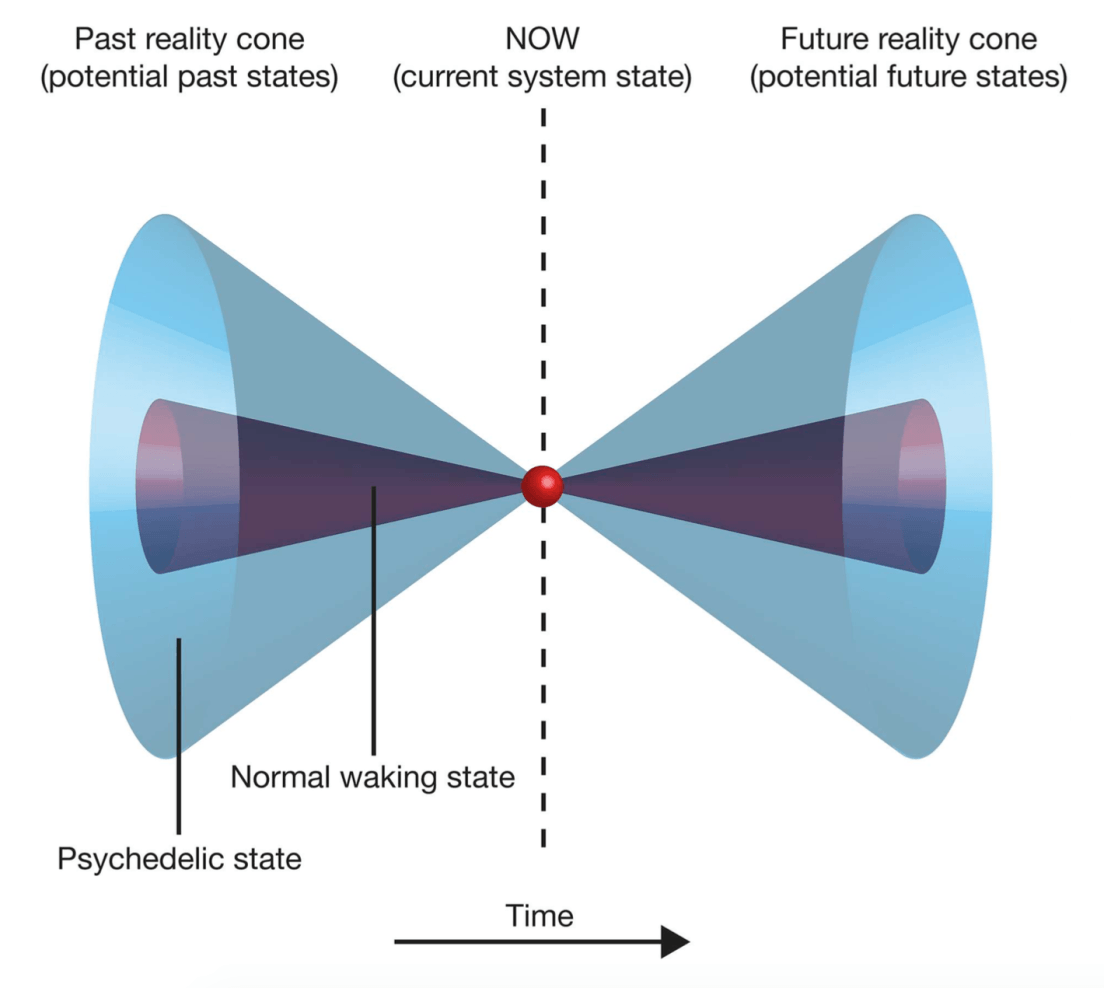 Figure 3: The widened cone of potential experiences an individual can access in a psychedelic mind-state compared to a sober mind-state.6

IIT examines the brain from an information theory perspective, complementing other theories of neural phenomena. IIT details how sensory information can be integrated to form concepts. These concepts can be integrated together to form a maximally irreducible conceptual structure (MICS), which ITT defines as consciousness. In this model, psychedelics cause concepts to form links with each other more than usual. This might explain several phenomena observed in psychedelic mind-states like increases in creativity, fantastical thinking, and psychosis. This is conceptualized as an increase in the entropy of the information landscape of the brain.

After examining REBUS and the Anarchic Brain, CSHW, and IIT,  several common themes emerge. Based on these studies, psychedelics cause the following phenomena:

Further research to unify these different theories would allow for a more complete understanding of the link between neural biochemistry and the conscious experience.

What is the binding affinity for serotonin itself? Also, does psilocin have a stronger affinity for any receptors than serotonin? That would be really interesting to know.

Having read several clinically and/or neurologically focused articles on this site, as one might imagine, I have had many thoughts– And Thanks, for asking… Most immediately, a question (for consideration, but, not necessarily, an answer.) I wonder/have imaginings about what is meant by “challenging experiences.” ? Mostly it conjures up meaning difficult, even traumatic experience “under” the influence and even”after” the influence. But of more broad import for me is to underscore my preference for the clinical metaphor over the neurological one. This site is much better than many other approaches. It seems too often that presentations are (too) reductive… Read more »