The ability of psychedelics to alter structural and functional neuroplasticity in the brain is a significant area of exploration for labs around the world. Researchers are teasing apart the fine details of the mechanisms by which compounds like psilocybin (the prodrug of psilocin found in magic mushrooms) can relieve anxiety, depression, and other symptoms while maintaining their effects for weeks after administration. Scientists are continuing to learn how psilocybin brings on its therapeutic effects by altering the structure and function of brain cells.

A psilocybin study recently published by Dr. Lingxiao Shao and her research team in bioRxiv1 is catching the attention of prominent psychedelic researchers. For example, Dr. Bryan Roth of the Department of Pharmacology at UNC-Chapel Hill School of Medicine said on Twitter, “This is potentially a landmark paper in #psychedelics research!”

Unanswered Questions About Psilocybin and Neuroplasticity

Dr. Lingxiao Shao’s research team set out to fill two critical gaps regarding psilocybin that they identified in the literature: 1) No one had demonstrated that psilocybin changes structural plasticity at the cellular level in a mammalian brain, and 2) it is unknown how long it takes for psilocybin to elicit its neuronal effects in vivo.

Shao et al. used techniques including two-photon microscopy and the head twitch response (HTR) to observe, among other things, the effects of one dose of pure psilocybin on dendritic spine growth in layer 5 pyramidal neurons in the mouse medial frontal cortex. They also utilized the 5-HT2A receptor antagonist ketanserin to test whether the receptor is involved in the brain structural plasticity brought on by psilocybin.

Using five different doses of psilocybin in the HTR test, Shao et al. corroborated the work of Halberstadt et al.2 and Sherwood et al.,3 finding a sharp rise in HTRs at a dose of 1 mg/kg. They also observed that the number of HTRs peaked 6-8 minutes after administration. The HTRs gradually declined and stopped in about 2 hours. The researchers used the 1 mg/kg psilocybin or saline (control) dose in subsequent experiments on structural plasticity. This paper contains a treasure trove of fascinating findings and corroborations of other work. Below are just some of the observations reported by Shao et al.

The research team tracked the size and growth of “1,820 dendritic spines on 161 branches from 12 animals including 6 males and 6 females” before and after a 1 mg/kg intraperitoneal (i.p.) dose of psilocybin or saline. Statistical analysis found significant changes in the dendritic spine density and head width over time (Figure 1). 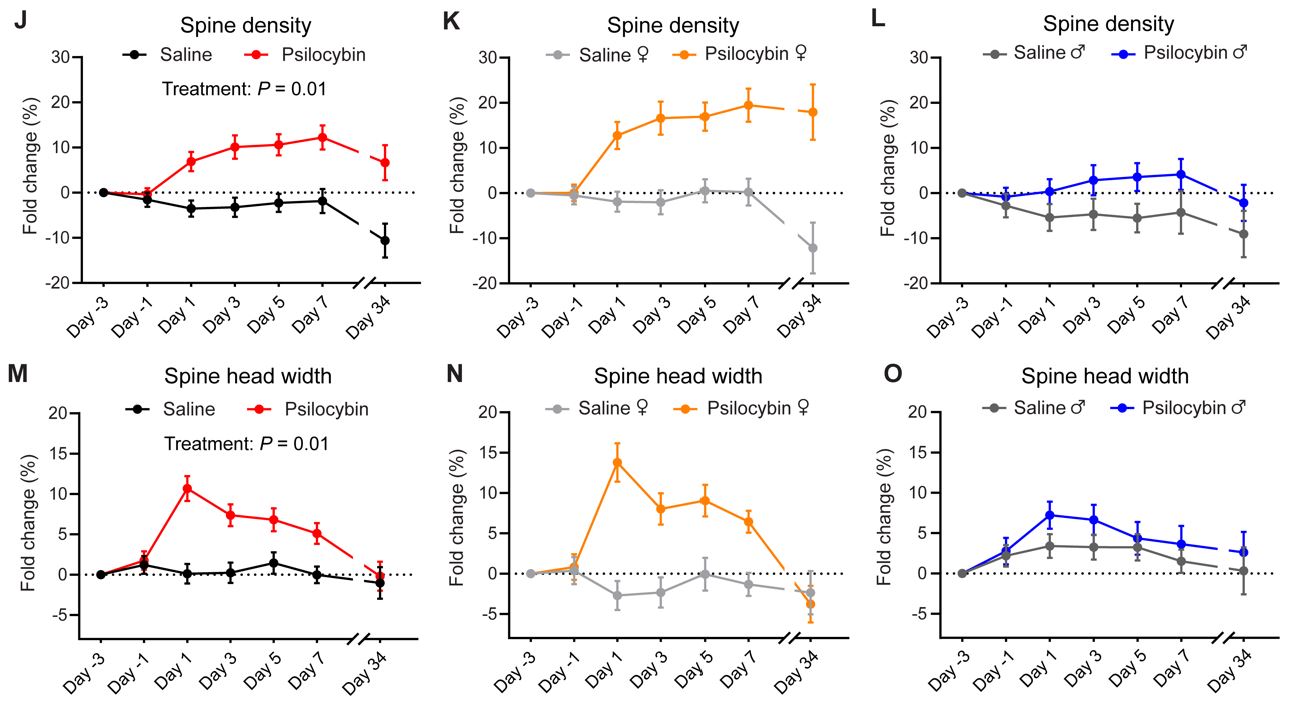 Figure 1: Click to enlarge. Graphs illustrating the effect of 1 mg/kg of psilocybin and saline on dendritic spine density and head width using data from male and female C57BL/6J mice.1 Plotted as fold-change from baseline value on Day -3. Mean +/- SEM.

Dr. Shao and her team wondered if the increased spine density meant that more of them were forming or if the rate of their elimination was slowed by psilocybin. So, they calculated the turnover rate of the dendritic spines and, from that, made the following observations from the experimental data (Figure 2).

Interestingly, the peak rate of spine formation occurred shortly after the mice received the single psilocybin dose. The formation then steadily decreased over time, eventually returning to equilibrium with the spine elimination rate. The authors concluded,

These data therefore support the view that the long-term increase in spine density is due to an initial boost of enhanced spine formation.

Some Dendritic Spines Persisted One Month After Psilocybin

Shao et al. kept watching the newly formed dendritic spines for several weeks. They found about half of them were still stable by Day 7 after psilocybin administration (Figure 3). From this, they commented, “This suggests that a portion of the new dendritic spines produced by psilocybin would become functional synapses.” They added,

Intriguingly, select individual dendritic branches appeared to retain all the new spines, while other branches lost them almost completely, suggesting heterogeneity and potentially responsive and nonresponsive subpopulations of pyramidal neurons.

Further, they looked for the spines formed after psilocybin administration on Day 1 in four mice after 34 days had passed (Figure 3). They found that 34+/-10% of the spines persisted in females and 37+/-12% in males. Shao et al. commented that these results correlate with clinical trial findings that the effects of psilocybin are long-lasting.

In another aspect of the paper, Shao et al. investigated if the 5-HT2A receptor is related to psilocybin’s effects on structural plasticity in the mouse brain. They pretreated mice with 1 mg/kg ketanserin i.p. ten minutes before dosing them with 1 mg/kg psilocybin or saline and doing HTR testing. As expected, ketanserin stopped the HTR completely.

Next, the research team watched “1,443 dendritic spines on 120 branches from 8 animals including 4 males and 4 females” pretreated with ketanserin and dosed with psilocybin as described above. Using the two-photon imaging, they observed that dendritic spine density was no longer statistically significant under ketanserin. However, they did see increases in the width of spine heads, spine protrusion length, and spine formation rate on Day 1. The authors summarized the findings by saying,

Our results demonstrate that while a moderate knockdown of 5-HT2A receptor function eliminates head-twitch responses, it is not sufficient to abolish the psilocybin-induced structural remodeling in mice.

There is another interesting aspect of psilocybin pharmacology that this study brings to light. Dr. Shao and her team looked for sex differences in the data. As mentioned earlier, female mice exhibited twice the rate of spine formation after psilocybin administration than males (+8% vs. +4%). Also, the data showed that one month after a single dose of psilocybin, females retained 34% of the new dendritic spines they grew while males retained 37% (Shao et al. captured more sex-related data which will be featured in an upcoming Psychedelic Science Review article). These similarities and differences between the sexes present intriguing new questions for psychedelic researchers to answer.

In this recent work, Shao et al. demonstrated “that a single dose of psilocybin evokes growth of dendritic spines in the medial frontal cortex of the mouse.” Integrating the findings from other studies, they explain why this study is important for understanding the therapeutic effects of psilocybin at the cellular level. Also, from their HTR and ketanserin findings, they proposed that “Future studies with region- and cell-type-specific knockout of serotonin receptor subtypes are needed to produce more decisive evidence on the role of 5-HT2A and other receptors in mediating the effects of psilocybin on dendritic plasticity.”

Finally, Shao et al. noted the following regarding their findings on the time course of psilocybin effects.

By showing that the time course for psilocybin-induced structural remodeling is rapid and persistent in vivo, our study suggests that synaptic rewiring may be a mechanism shared by compounds with rapid antidepressant effects.

Regarding the different effects Shao et al. observed in male and female mice, Psychedelic Science Review has published several articles on women and psychedelics including “Psychedelics and Women’s Health,” “Female Hormones, 5-HT2A Receptors, and Psychedelics,” and “2005 Literature Review Proposes Serotonin Mediates the Effects of Estrogen.” The unique effects of psychedelic drugs on women present a whole new world for research. It is reasonable to postulate that a women’s unique physiology requires different therapeutic formulations than what works for men. Is there a uniquely female entourage effect with psychedelics?

Shao et al. cautioned that, although humans and mice are both mammals, mouse brains have fundamental differences from human brains, including receptors. Thus, it is unclear at this time if these results can be extrapolated to humans.