For decades, scientists have wondered why DMT (N,N-Dimethyltryptamine or N,N-DMT) is not found in any of the over 200 species of mushrooms that produce psilocybin and other interesting compounds. Recent studies regarding the biosynthesis of psilocybin provide an answer to this age-old question.

In 1997, Alexander and Ann Shulgin published their groundbreaking research on the group of psychoactive drugs known as tryptamines in a book titled TiHKAL: The Continuation.1 In TiHKAL, the Shulgin’s studied about 50 tryptamine derivatives, including many psilocybin derivatives. Through these studies, they published the first syntheses for many previously unknown tryptamine molecules. They also (bravely) published anecdotal reports on the effects of these molecules had on them. The Shulgin’s laid the groundwork for elucidating the structure-activity relationship within this class of molecules.

Despite their pioneering work in this area, the Shulgin’s were never able to understand why DMT was never found in magic mushrooms. As they stated in TiHKAL:

“All of these [mushrooms] contain 4-hydroxy-DMT compounds in various guises, but not one of them contains DMT, which I [we] find totally amazing.”

Until recently, this was a curious problem because tryptamine molecules are abundant in nature — yet two important and structurally similar analogs could never be found in the same place at the same time.

The Answer to the Shulgin’s DMT Puzzle

Recently, a team of scientists characterized four psilocybin biosynthesis enzymes, which are responsible for converting tryptophan (a naturally occurring amino acid) into psilocybin and its derivatives.2 Aside from making several other contributions to the field, the paper shows the most plausible biosynthetic pathway for making psilocybin:

The previously accepted biosynthetic pathway stated tryptamine (from step #1 above) was first methylated before hydroxylation and phosphorylation.3,4 The molecular sites of the reactions are shown below in Figure 1. 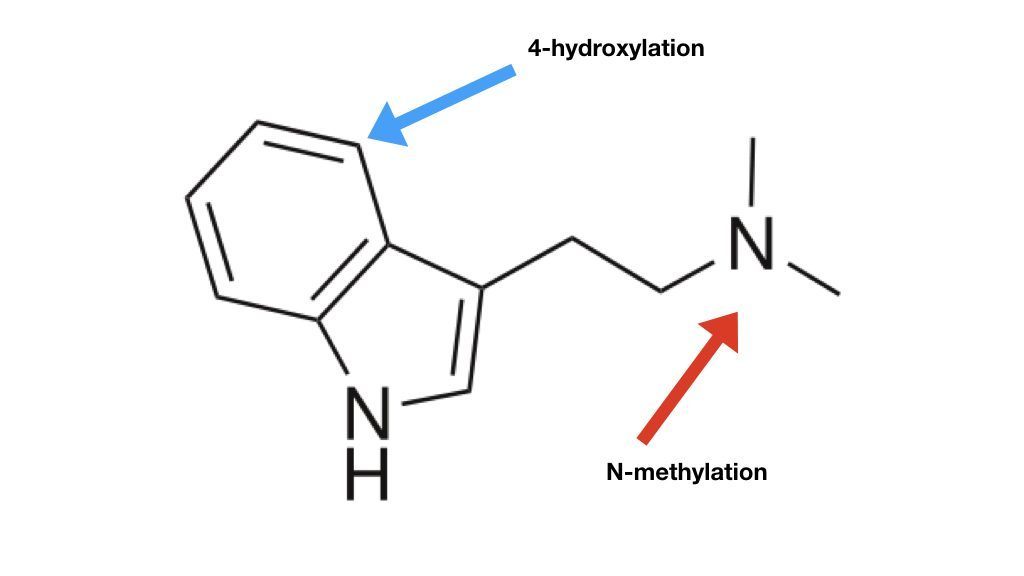 This change in understanding regarding the biosynthetic pathway of psilocybin explains why DMT is never found in mushrooms:

The new information about the biosynthetic pathway of psilocybin explains why DMT is not found in magic mushrooms. This information also raises questions as to whether mushrooms could be cultivated to make DMT. At a high level, making DMT could be accomplished by finding methyltransferase enzymes that accept tryptamine as a substrate. Another option is finding a way to slow down the monooxygenase enzyme that converts tryptamine into 4-hydroxytryptamine.

“Psilocybin is a tryptamine alkaloid that is N,N-dimethyltryptamine carrying an additional phosphoryloxy substituent at position 4.”

It was pretty misleading to just claim mushrooms don’t contain dmt, when they obviously do contain a form of dmt. An orally active form of dmt…. Hope this helps!

Thank you for the clarification

well how about just take it from the mushroom and methylate it and turn it into mushroom dmt.