Researchers at CaaMTech, the University of Massachusetts Dartmouth, and Canopy Growth USA have published an article in ACS Omega detailing the synthesis, crystal structure, and serotonin receptor activity of 4-HO-TMT (4-hydroxy-N,N,N-trimethyltryptamine).1 This paper is the latest in a series of from CaaMTech that have come out since early 2019.2–10

Chadeayne et al. explained that their impetus for this study was gaining a better understanding of other potentially psychoactive molecules in magic mushrooms (aka psilocybin mushrooms) besides psilocin. They noted that the literature indicates the effects of magic mushrooms are different from pure psilocybin, suggesting a synergy such as what occurs between the compounds in cannabis.11,12 Chadeayne et al. stated, “The extracts of ‘magic mushrooms’ demonstrate the same clinical effects as pure psilocybin at dosages that are an order of magnitude smaller, suggesting important activity by other psychoactive molecules or the presence of an entourage effect.”

4-HO-TMT is purportedly the metabolite of aeruginascin, which is found in the magic mushroom Inocybe aeruginascens. The hypothesis about the origins of this metabolite is based on an analogy to the hydrolysis of the prodrug psilocybin to the active metabolite psilocin (Figure 1). Chadeayne et al. hypothesized that aeruginascin undergoes similar hydrolysis to form 4-HO-TMT. 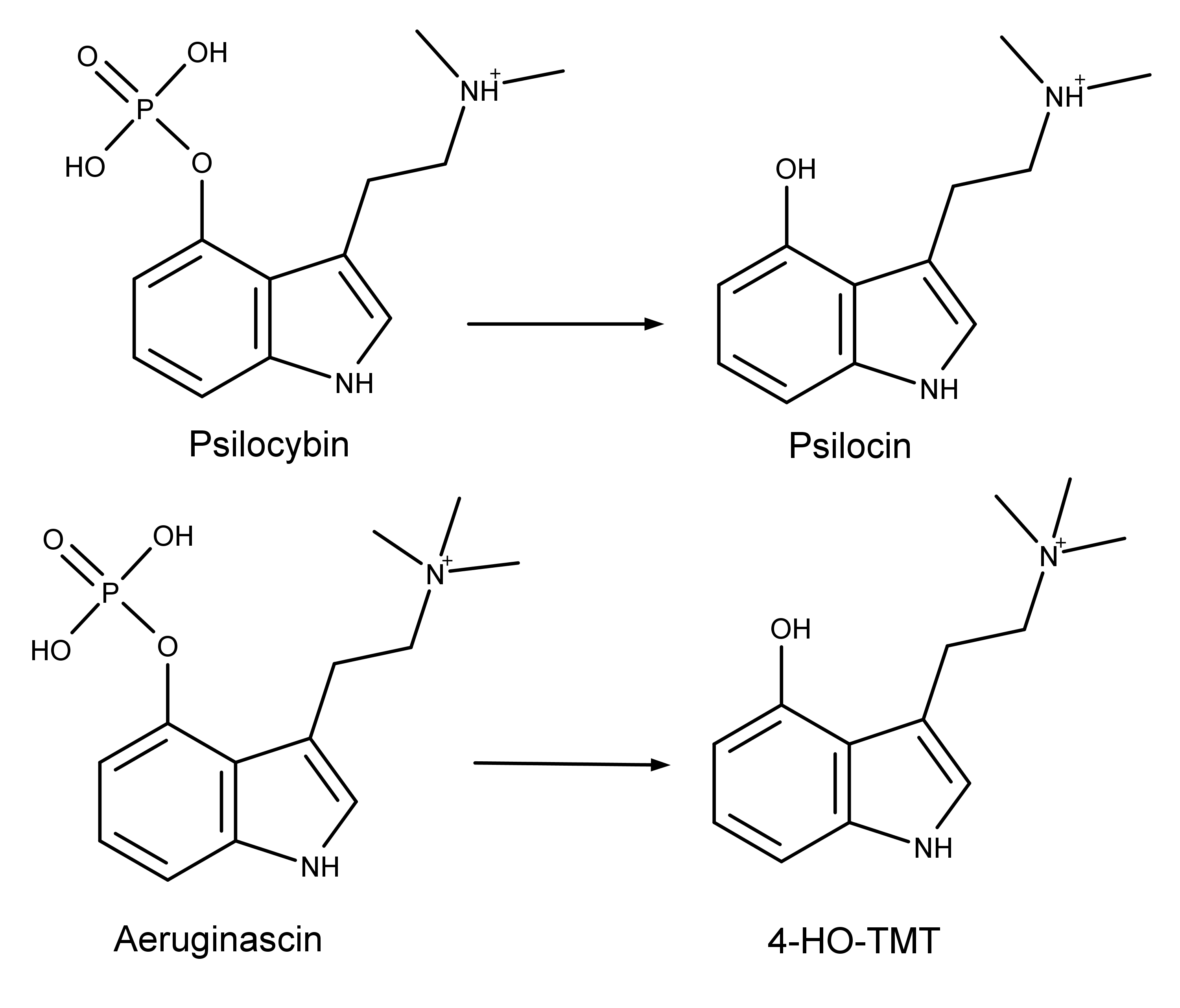 Figure 1: Chemical structures showing the similarity that may exist between the conversion on the prodrug psilocybin to that of aeruginascin to its purported metabolite 4-HO-TMT.

4-HO-TMT has a similar chemical structure to bufotenidine, an active compound in toad venom (Figure 2). Bufotenidine is a strong selective agonist of the serotonin 5-HT3 receptor.13 As such, Chadeayne et al. worked from the hypothesis proposed by Jensen in 2004,  that 4-HO-TMT would show similar activity at 5-HT3.14

The researchers also tested their prediction that 4-HO-TMT would be inactive at receptors in the serotonin 5-HT2 family. This idea stems from what the authors called “the leading hypothesis” in the scientific community on the activity of aeruginascin at these receptors.

The synthesis of 4-HO-TMT begins with 4-AcO-DMT (aka psilacetin, 4-acetoxy-N,N-dimethyltryptamine ) fumarate, a functional analog of psilocybin. Below are the basic synthesis steps described by Chadeayne et al.

The authors report that,

These are the first two quaternary tryptammonium salts ever characterized by single-crystal diffraction.

They confirmed the identity and high purity of the compounds by using NMR and elemental analysis. Further, Chadeayne et al. solved the crystal structures of the iodide salts of 4-HO-TMT and 4-AcO-TMT. In a press release, CaaMTech refers to these compounds by the names Amphoria and Prophoria, respectively.

In the next part of the study, Chadeayne et al. tested the binding affinity of 4-HO-TMT and 4-AcO-TMT at four serotonin receptors, 5-HT1A, 5-HT2A, 5-HT2B, and 5-HT3. Table 1 below shows the receptor testing data. For more information on receptor binding values and what they mean, see the PSR article Binding of Psilocin and Psilocybin to Serotonin Receptors.

Table 1: Ki values in nM for 4-HO-TMT and 4-AcO-TMT.1 Values for psilocybin and psilocin are included for comparison.15 Ki values >10,000 imply no activity at the receptor.

4-AcO-TMT showed no binding activity at any of the receptors tested. However, 4-HO-TMT had activity at 5-HT1A, 5-HT2A, and 5-HT2B. Agonist activity at 5-HT2A is regarded by experts as the hallmark of psychedelic activity.16

Although 4-HO-TMT showed less binding affinity at 5-HT2A than psilocin, the authors concluded that the Ki values were comparable (670.0 nM and 107.2 nM, respectively). Also, the data showed that 4-HO-TMT has a similar affinity for 5-HT2B compared to psilocybin.

Recall that one of the hypotheses Chadeayne et al. was testing was that aeruginascin’s active metabolite 4-HO-TMT would have an affinity for 5-HT3 like bufotenine. The data showed this was not the case. The Ki for 4-HO-TMT at 5-HT3 was >10,000 nM.

The authors also noted an important observation regarding the activity of 4-HO-TMT at the 5-HT2B receptor. In 2000, Rothman et al. proposed the involvement of 5-HT2B receptor activation with valvular heart disease (VHD).17 In the Chadeayne et al. study, the data indicated that 4-HO-TMT had significantly less binding affinity for 5-HT2B than psilocin. The comparison of Ki values is considered state of the art for estimating the safety of a compound in relation to 5-HT2B and VHD.18

Despite the value gained from these tests, it is unclear why Chadeayne et al. did not test the two compounds at nicotinic acetylcholine receptors. The results may have shed some light on the possible role of aeruginascin (or its metabolite) in the phenomenon known as wood lover paralysis.

What Does All This Mean for Psychedelic Research?

This study by Chadeayne et al. makes several significant contributions to the knowledge base of psychedelic science. First, it provides a synthesis method for 4-HO-TMT, which makes the compounds available for further research. Also, the crystal structures they resolved are essential for understanding changes at the molecular level that can affect the physical properties of a compound. From this, scientists can gain more understanding of the behavior of compounds at biological receptors.

The latter results present an intriguing puzzle about the potential psychotropic activity of 4-HO-TMT. Chadeayne et al. say that by having a quaternary ammonium group, it appears unlikely that 4-HO-TMT could cross the blood-brain barrier (BBB) and directly affect 5-HT2A receptors in the brain. However, they point to a 2014 study indicating that another quaternary ammonium compound crosses the BBB.19 In this study, Zacny et al. showed that the compound known as methylnaltrexone or MTNX, crossed the BBB in humans, possibly via cellular transporters. Chadeayne et al. concluded,

Given the building momentum behind magic mushroom decriminalization and legalization, understanding all of the molecules in those mushrooms and their effects seems like a good idea.

AMAZING WORK
BRILLIANT
totally unexpected. Must be scrutinized rigorously. But if consistent… INCREDIBLE

Yes – we were pretty surprised by the results. (We did reproduce them). Now we are eager to conduct some more follow up studies to get an even better understanding for what’s going on in magic mushrooms.

….and if these quaternaries are crossing the BBB. Cheers….

Hi James – We will publish information about how these compounds act at other receptors soon. Right now, we still need to confirm some results. And, although some of our preliminary numbers are exciting, we want to be careful about only publishing good descriptions of reproducible data. In any event, thanks for your interest!
Best,
Andrew

Absolutely Amazing.
There are so many possibilities here. My mind is reeling.

Thanks Del! Yes, what a wonderful time to be working in this space.