Current research suggests that MDMA, or 3,4-methylenedioxymethamphetamine, may be particularly useful in the treatment of post-traumatic stress disorder (PTSD). Belonging to a class of substances known as entactogens, MDMA and its derivatives bear structural motifs common to both psychedelics and amphetamines, giving them a unique pharmacology with distinct subjective effects. As research continues to develop, MDMA has become regarded as a potential remedy for PTSD, with its first phase III clinical trial recently concluded. These results reaffirm that MDMA may indeed be effective when used as an adjunct to psychotherapy.1 This excitement begs the question: just how are MDMA’s positive effects mediated? What is the neurobiology underlying the positive outcomes observed? These aspects of MDMA-assisted therapy are poorly understood and warrant further investigation. Recent work offers important insights, with preclinical animal models exhibiting an enhanced resilience to experimentally learned fears upon MDMA administration, and with subsequent human trials reiterating this effect. Taken together, a biological explanation for MDMA’s ability to remedy PTSD may lie in its propensity to enhance fear extinction learning and memory reconsolidation.

Preclinical research by Young and colleagues in 2015 found that MDMA persistently enhances fear extinction learning when administered prior to extinction training, in which mice were conditioned to associate a sound with the sensation of electric shock.2 A cued fear experimental design was used, which begins with fear conditioning where mice were exposed to the pairing of a tone (called the Conditioned Stimulus, CS) with a foot shock (the Unconditioned Stimulus, US) (Figure 1a). Extinction training and testing then occurred, as the mice were placed in a different environment and the foot shock (the US) removed. Even in the absence of the foot shock, a freezing behavior resulted upon hearing the tone because these mice were conditioned and trained to associate the sound with a shock. 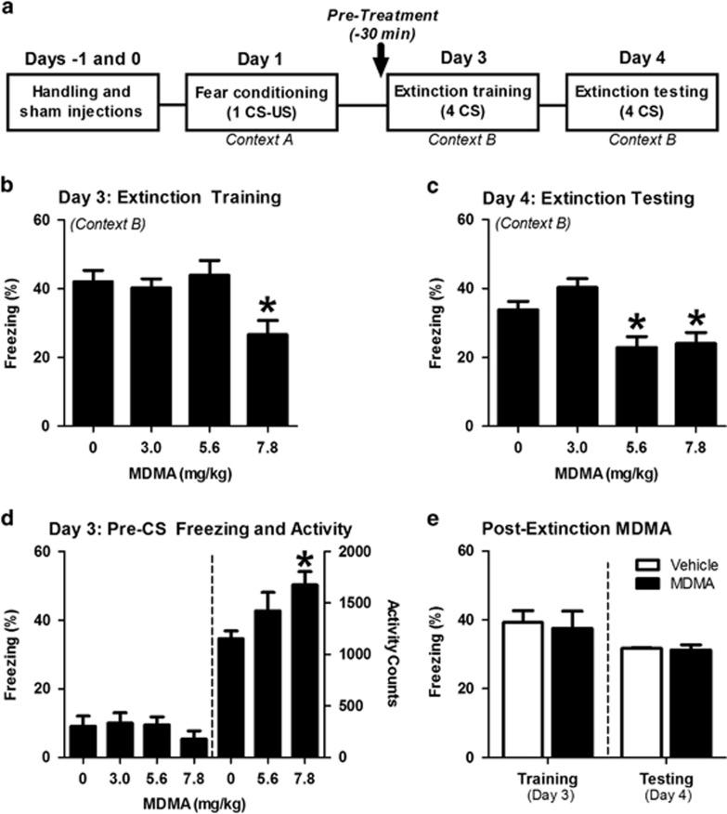 Figure 1: (a) The conditioning procedure used was based on cued fear and extinction, in which mice were trained to associate the sound of a tone with a shock on the foot (US and CS, respectively). (b) MDMA dose-dependently reduced the frequency of freezing behavior during extinction training. (c) Animals previously treated with MDMA exhibited dose-dependent reductions in freezing 24 hours later. (d) MDMA had no effect on freezing prior to the first CS-tone re-exposure, but 7.8 mg/kg of MDMA did increase locomotor activity. (e) When administered immediately following extinction training on Day 3, MDMA had no effect on freezing in response to four tones on Day 4. From Young et al., 2015.2

MDMA On a Roll

Following promising preclinical investigation, MDMA’s utility for fear extinction was put to the test in healthy humans. In recent work, Vizeli and colleagues found reductions 23 hours after extinction learning in Fear Potentiated Startle (FPS) and in another conditioning paradigm called Skin Conductance Response (SCR).6 In FPS, conditioned fear is measured by an increase in the amplitude of a simple reflex, in the presence of a cue previously paired with an electric shock. SCR is considered an indirect measurement of sympathetic nervous system activity, in which heightened amplitude of SCRs is associated with increased arousal as a consequence of stimuli that elicit autonomic responses to fear. MDMA administration occurred after fear conditioning and before extinction learning, a similar protocol used in previous animal studies. It was concluded that MDMA facilitated both fear extinction and the retention of this extinction, the authors noting the consistency of their findings with preclinical data. The authors also proposed that a component of fear extinction enhancement may also involve oxytocin, in which plasma levels increased fourfold upon administration of MDMA and the onset of acute effects—but no associations were found regarding oxytocin and fear extinction outcomes.

A similar study by Maples-Keller and colleagues examined MDMA’s impact on fear extinction and its enhancement, utilizing a similar experimental paradigm; a fear-acquisition conditioning session was followed by MDMA or placebo administration and extinction training.7 As opposed to 24 hours, retention of fear extinction was quantified 48 hours after extinction training. Even 48 hours afterward, significantly more subjects in the MDMA group retained an enhancement of fear extinction learning as compared to placebo, demonstrating a longer lasting response than previously reported (Figure 2). While the authors note that the longer-term persistence of extinction behavior was often interrupted due to the phenomenon of spontaneous recovery, they speculate that for the clinical translation of MDMA use, more extinction training sessions may be needed to see a higher rate of extinction retention. A return of fear behavior through spontaneous recovery is a normal phenomenon in this conditioning paradigm, yet the MDMA group demonstrated significantly more subjects who retained extinction despite this (Figure 2). Other investigators noted that individual factors may interact with MDMA’s facilitation of fear extinction, namely hormonal, genetic, situational, or any combination, warranting further research.8

Places and Proteins at Play

While a growing body of literature supports MDMA’s use as an adjunct to psychotherapy, an exact biological mechanism for its positive effects remains elusive. Given the behavioral manifestations observed in preclinical research and in human trials, discerning how exactly these changes are mediated is imperative. The premise of Young and colleagues’ 2015 work, using conditioned freezing as a measure of extinction and quantifying MDMA’s influence on this behavior, led researchers to elaborate on their results by investigating specific biological mechanisms and brain regions that may be involved.9 Chronic administration of SSRIs like citalopram likely negate MDMA’s influence on conditioned fear response via direct binding competition as well as serotonin transporter (SERT) downregulation, diminishing transporter-facilitated release of serotonin by MDMA.10 The regulation of serotonin activity by Brain-Derived Neurotrophic Factor (BDNF) is also likely central to the mechanisms underlying extinction.

Young and colleagues found increased BDNF expression in the amygdala when MDMA was used during extinction training in mice. Conversely, MDMA in doses sufficient to enhance extinction did not increase BDNF levels in untrained controls. When given anti-BDNF antibody (to block BDNF signaling) before extinction training, reductions in conditioned freezing in the MDMA group were diminished 24 hours later (Figure 3). However, when administered 10 hours after extinction training, anti-BDNF infusion did not block MDMA’s effects (Figure 3c). BDNF is important in learning and memory, and appears to facilitate the neural changes that take place for extinction learning.11 Indeed, pharmacological interventions increasing BDNF enhance extinction learning, while those attenuating it diminish this response.12,13 Other work has demonstrated similar extinction learning and BDNF’s role in the basolateral amygdala.14 Consistent with citalopram’s attenuation of the enhancement response, serotonin has been shown to regulate BDNF expression in this critical region for fear extinction; SSRIs blocking SERT likely interferes with BDNF activity and ultimately hampers extinction.15,16

The remarkable conclusions of research regarding MDMA’s ability to ameliorate the behavioral difficulties associated with PTSD is blazing a trail forward for the translation of preclinical science to real world applications. These results warrant a mechanistic explanation to better understand just how the behavioral changes observed are mediated, clues which may lie in the amygdalae of mouse and man alike. While recent literature suggests that MDMA diminishes conditioned freezing and induces a sustained enhancement of fear extinction, these effects are negated when serotonergic signaling is attenuated. Taken together, research into serotonin signaling and its interaction with the amygdala suggests a neurobiological explanation for MDMA’s ability to improve the symptomatology of PTSD and associative fear. As investigators have noted, more work in human trials is needed to further elucidate the changes that manifest in the enhancement of extinction learning, and these results must be examined in the context of conclusions gleaned from preclinical models. The evolution of this research suggests a convergence of neurotrophic factors, neurotransmitters, and likely a host of other biological components on the amygdala, facilitating the enhancement of fear extinction learning and helping to sustain this beneficial response.